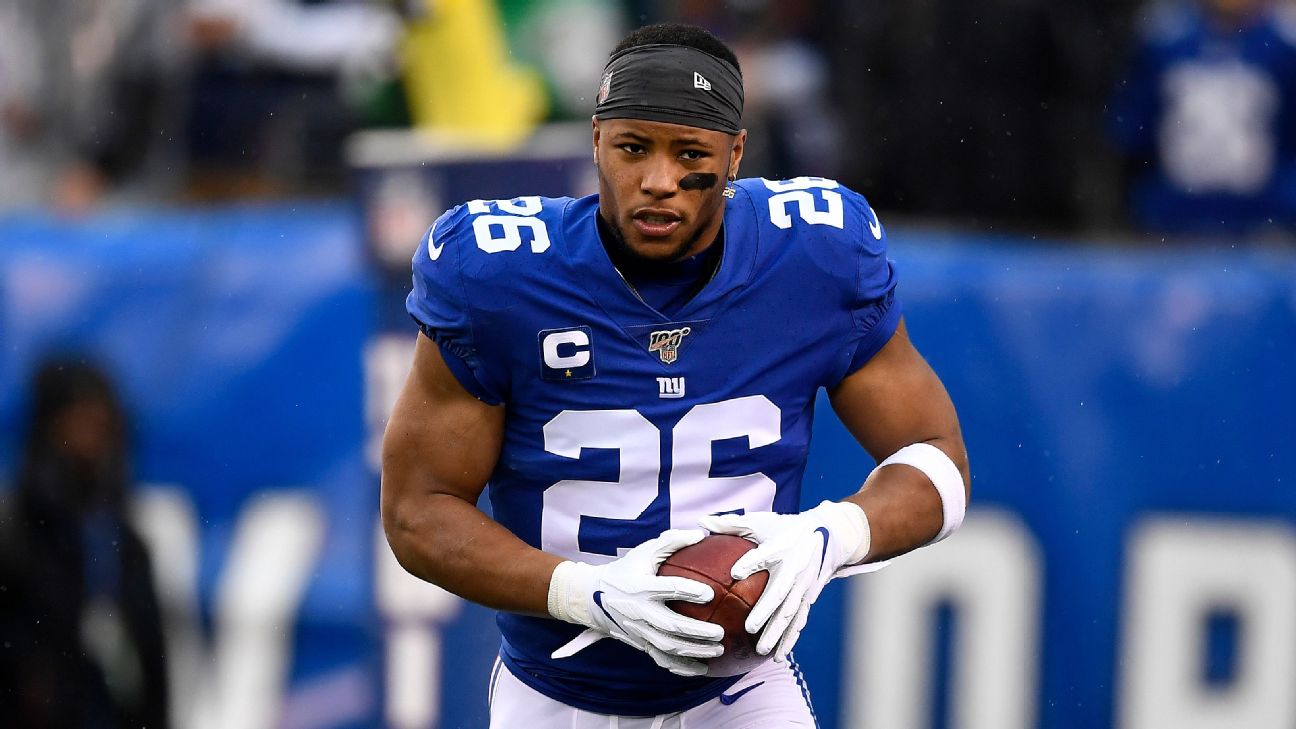 Rejoice, football fans! The first Sunday of the NFL regular season is here! The 2021 season got off to a great start thanks to the thrilling game between the Dallas Cowboys and Tampa Bay Buccaneers.


The other 30 teams are making the final adjustments to their roster before Week 1, which means managing their injury report. Some teams have received positive news about key players battling injuries. Indianapolis Colts head coach Frank Reich said quarterback Carson Wentz will start after undergoing surgery on his foot a little over a month ago, and New York Giants running back Saquon Barkley seems to be on track to play Sunday after missing most of last season with an ACL injury. Other squads aren't so lucky, however. The Baltimore Ravens have had to endure many injuries already, specifically to their running backs.

Heading into Week 1, our team reporters break down injury news surrounding big-name players that could impact their team's chances of winning. Here's what we know about their status heading into opening week in the NFL:

After being limited in practice all week, Sanders is listed as questionable for Sunday's game against the Pittsburgh Steelers with a lingering foot injury. Sanders, however, is likely to play in his first game for the Bills this weekend. The oldest player on the roster quickly developed chemistry with quarterback Josh Allen and should have a sizeable role on the offense this year. -- Alaina Getzenberg

Waynes, who missed all of 2020 with a pectoral injury, will not make his Cincinnati debut against his former club, the Minnesota Vikings. Waynes suffered a hamstring injury toward the end of training camp and didn't practice all week ahead of Sunday's game. Look for cornerback Eli Apple to get the start opposite Chidobe Awuzie. Apple and Awuzie will have to contend with Vikings WRs Adam Thielen and Justin Jefferson. -- Ben Baby

Decker suffered a finger injury earlier in the week and will miss Week 1. "We'll adjust from there and we will move forward," said Lions coach Dan Campbell. Decker started Wednesday's practice, but the injury occurred in pass protection. He met with a doctor Friday afternoon where his status was determined. Campbell feels "that it's probably leaning that way" to requiring surgery. Rookie Penei Sewell will likely fill his role as they look to protect QB Jared Goff in his debut. -- Eric Woodyard

Smith has practiced exactly three times this season -- once midway through training camp only to shut it down the next day, and then twice this week, only to be held out on Friday. What would the Packers miss without him? It's hard to know because he hasn't missed a game since he signed with them in 2019, but know this: He's one of only three players with 12-plus sacks in each of the past two seasons (Aaron Donald and T.J. Watt are the others). It will be a game-time decision but considering coach Matt LaFleur said Friday that Smith is still "feeling some things," it doesn't look good. -- Rob Demovsky


Seattle Seahawks receiversDK Metcalfand Tyler Lockettcould see a big game against the Colts since the Colts won't have their top outside cornerback. Rock Ya-Sin is the frontrunner to start with Kenny Moore to try and slow down the Seattle passing game. Both Metcalf and Lockett had over 1,000 receiving yards last season. -- Mike Wells

Mathieu didn't practice all week as he was on the reserve/COVID-19 list. The Chiefs activated him on Saturday, but he is listed as questionable on the team's official injury report. "We'll move guys around, do what we have to, try to do most of the things we do with Tyrann but certainly some of those things are going to change and some of the calls might alter because of that," defensive coordinator Steve Spagnuolo said. -- Adam Teicher

He did not practice Wednesday or Thursday, but his agent says it was "precautionary." We will see if this is a lingering problem, but coach Brandon Staley is very careful when one of his guys comes up with an issue. Ekeler had a hamstring issue last season where it was so painful he had to walk backwards. -- Shelley Smith

The Vikings optimism surrounding Barr's availability quickly dissipated after he did not practice on Thursday and Friday. Some days the lingering knee issue feels good, others it doesn't, according to coach Mike Zimmer. This could be a chronic problem on a week-to-week basis. Replacing Barr will be Nick Vigil, who will wear green dot duties after calling the defense throughout training camp in Barr's absence. Cincinnati typically uses three or four receivers at a time, so it's likely Vigil will play an every-down role Sunday if the Vikings stay in their nickel defense. -- Courtney Cronin

Agholor didn't practice Thursday and was limited Friday, with his official designation as questionable. Fellow WR Jakobi Meyers said Thursday that he didn't even realize that Agholor was ailing, so that was either good gamesmanship or a reflection that Agholor will be available Sunday. -- Mike Reiss

Barkley has done everything the Giants asked this summer, without any setbacks. It has him positioned to play in the opener after tearing the ACL in his right knee in Week 2 of last season. Barkley will play Sunday, albeit in a limited role, barring a setback. Coach Joe Judge has been adamant about taking a long-range approach with his star running back, and that might mean around 20 to 30 snaps and 10-15 touches in his first game back.-- Jordan Raanan


Their top slot receiver hasn't cleared COVID-19 protocols, so the Jets could use rookie Elijah Moore in the slot or turn to Braxton Berrios. WR Keelan Cole (knee) is questionable, which could mean a role for Denzel Mims or Vyncint Smith (practice squad). -- Rich Cimini

Smith was expected back from his nagging hamstring injury this week. But he wound up on injured reserve Friday instead after returning to practice for just one day earlier in the week. That means preseason breakout Marquez Callaway is the Saints' no-doubt No. 1 target since Michael Thomas is also sidelined for at least five weeks with an ankle injury. Unfortunately, the Packers have a WR1 eraser in CB Jaire Alexander, so the Saints will need their secondary receivers and tight ends to step up in a big way. Second-year TE Juwan Johnsonis the biggest sleeper candidate for daily fantasy purposes. -- Mike Triplett

Crawley landed on injured reserve Friday after missing practice all week. If healthy, Crawley was a leading contender to start as New Orleans' No. 2 CB in Week 1 since newly-acquired veteran Bradley Roby isn't eligible to play until Week 2. Now the Saints will likely count on rookie third-round draft pick Paulson Adebo or the newly-signed veteran, Desmond Trufant. Either way, expect that spot to be tested relentlessly by the Packers and reigning MVP Aaron Rodgers. -- Mike Triplett

McLeod was recently taken off the physically unable to perform list but isn't quite ready for game action after tearing his ACL in December. He's been ruled out of Sunday's game against the Atlanta Falcons. Second-year player K'Von Wallace is expected to get the start in his absence opposite Anthony Harris. Wallace started three games last year and finished the season with 21 tackles. -- Tim McManus

Moseley enters this year as a starter at one of San Francisco's thinnest positions, which means his potential absence in the opener creates a big question mark for San Francisco's defense against the Lions. Moseley is officially listed as doubtful for Sunday, which means the Niners' choices to replace him are rookies Deommodore Lenoir and Ambry Thomas, just-signed-this-week veteran Josh Norman and veteran journeyman Dontae Johnson.-- Nick Wagoner

Samuel was placed on injured reserve with the intention of bringing him back after three weeks. He suffered a setback in his recovery this past week in practice, and with two games in the first five days, Washington knew he wouldn't be available. The key will be how he feels in three weeks and if his groin responds better. He initially hurt it during spring workouts and has practiced once all summer.-- John Keim 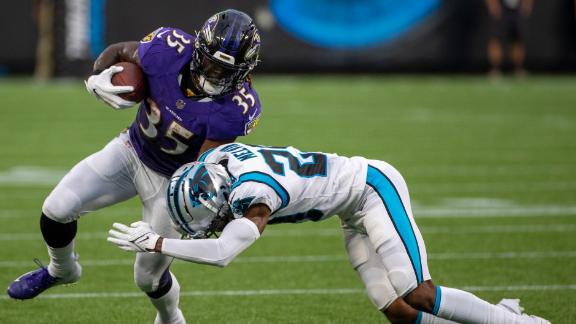