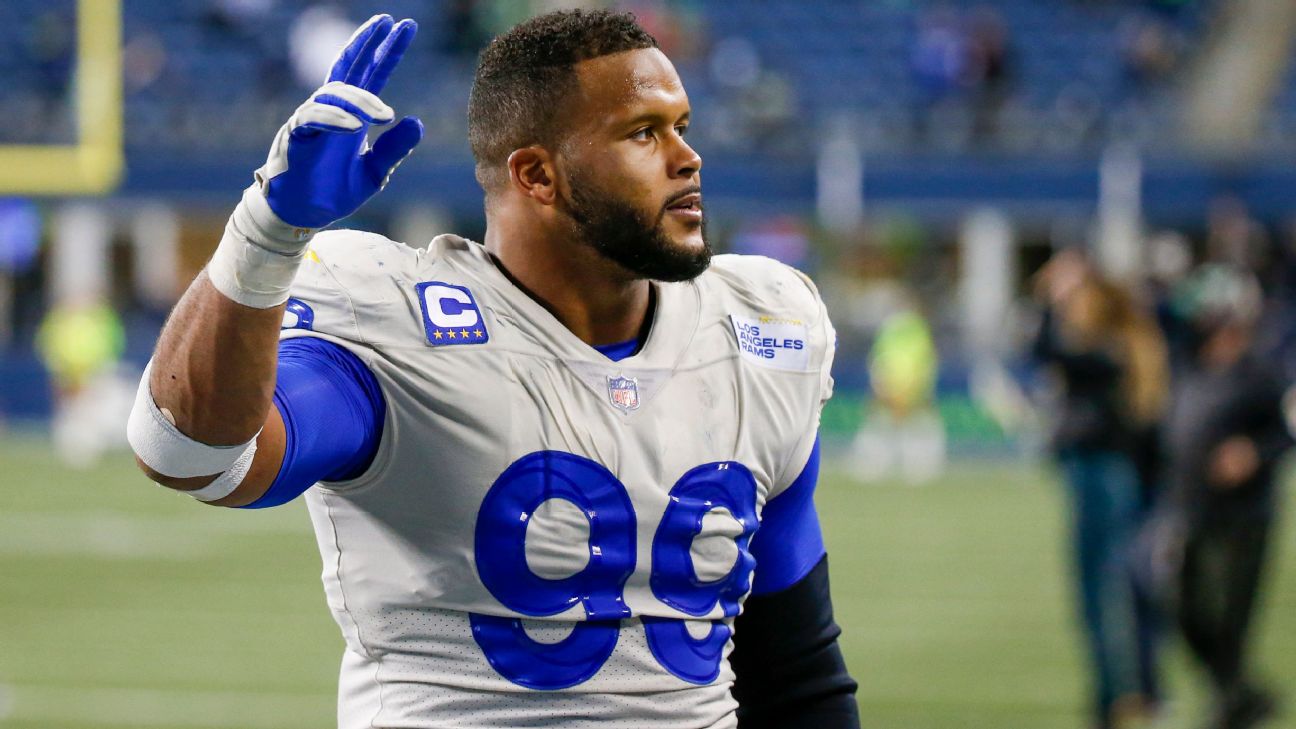 After five weeks of NFL action, there have been many surprises across the league this season.

Some teams have exceeded expectations out of the gate, while others have stumbled and left themselves with work to do moving forward. There have been exciting games, breakout performances and -- unfortunately -- injuries.


Entering Week 6, some teams have received tough news regarding some high-profile players on their rosters. Seattle Seahawks quarterback Russell Wilson will be out for a considerable amount of time after getting surgery on the middle finger of his right hand, which he injured during a loss to the Los Angeles Rams on Oct. 7. The Kansas City Chiefs also received bad news when running back Clyde Edwards-Helairelanded on injured reserve because of a knee sprain. The Pittsburgh Steelers suffered a huge offensive loss as well inJuJu Smith-Schuster, who underwent surgery for a dislocated shoulder and is out for at least four months. Injuries are costing many players valuable time this season.

Our NFL team reporters are back for another week of injury updates for their respective teams. They have all the latest on top injured players and their ability to suit up this weekend.

Watkins, who has struggled with durability throughout his career, could miss multiple weeks after injuring a hamstring on Monday night. Rashod Bateman, the No. 27 overall pick in this year's draft, is expected to replace Watkins and play his first NFL game after being sidelined the first five contests with a groin injury. Ravens offensive coordinator Greg Roman said Bateman won't be "thrown into the fire for every play," so expectations must be tempered. -- Jamison Hensley

McCaffrey will miss his third straight start, leaving the running game in the hands of rookie Chuba Hubbard again. The good news for Carolina is left tackle Cameron Erving returns from a neck injury. That should help solidify a line that has allowed eight sacks in the past two games. -- David Newton

The Bengals listed Mixon as questionable for Sunday's game at Detroit. However, Bengals coach Zac Taylor said Mixon is expected to play and shouldn't be on any restrictions after sporadic usage in Week 5 against the Green Bay Packers. Rookie Chris Evans will be Mixon's backup after Samaje Perine went on the illness reserve list earlier this week. This could be a chance to see if Evans can make the offense more dynamic. -- Ben Baby

The NFL's second-leading rusher has been ruled out with a calf injury. In his place, Kareem Hunt will get the start. Chubb is averaging 5.8 yards per carry, but Hunt is averaging 5.4 behind him and figures to get a heavy workload with both of Cleveland's starting tackles and key pass protectors (Jack Conklin, Jedrick Wills) ailing. -- Jake Trotter

Smith was limited during Friday's walk-through, but the expectation is he will play Sunday. While the nature of the injury is believed to be different from the issue that required surgery last year, there has to be some concern since he has dealt with a neck issue for a number of years. Nevertheless, Smith is critical considering the offense's success, especially this week against the New England Patriots' pass rush. -- Todd Archer


After a quiet three weeks, the Pro Bowl tight end is still trying to find a groove and continues to push through a knee injury. He didn't practice on Wednesday and was limited for the rest of the week, but Lions coach Dan Campbell said they have to get him going if he plays. "That's the bottom line because he can help us win," Campbell said. "That's going to be a focal point for us." He is listed as questionable. -- Eric Woodyard

Williams is listed as questionable to play this week after being limited in two practices and missing Thursday's session. Campbell said Williams will likely be ready to go, though. "He's better," Campbell said during Friday's practice. "He's here, and he feels better and he's going to practice today, so it should be good."

This isn't anything new; Swift has been on the injury report all season for the same groin injury, which started bothering him during training camp. It doesn't appear to be anything extreme; the Lions are monitoring the situation to make sure it doesn't get any worse. He is listed as questionable.

It's not just that King is out with a shoulder injury this week -- the Packers were already without All-Pro cornerback Jaire Alexander, who went on injured reserve last week because of a shoulder problem. King and Alexander were the Packers' opening-day starting cornerbacks. It now means rookie first-rounderEric Stokes is the only one of their top three corners available. The Bears have the fewest passing yards and second-fewest attempts in the NFL so far, but perhaps this is the week they let quarterbackJustin Fields take some more shots through the air. -- Rob Demovsky

Hill practiced only on Friday this week, and the Chiefs listed him as questionable for Sunday's game at Washington on their final injury report of the week. But coach Andy Reid seemed optimistic his star receiver would play, saying of him at practice on Friday, "He was bouncing around out there pretty good.''-- Adam Teicher

Hankins went down late in the Raiders' loss to Chicago and did not practice this week. He's the team's primary run-stuffer up the middle, and if he is unable to play -- he was listed as doubtful -- it would be his first missed game since joining the Raiders in 2018. Expect Darius Philon to fill in, then, though he is more of a pass-rush specialist with two sacks thus far. -- Paul Gutierrez

Williams slipped and injured a knee this week, and it has swelled up. However, the team is taking every precaution and he is listed as questionable for Sunday's matchup against the Ravens. -- Shelley Smith

Tranquil suffered a chest injury vs. the Browns and didn't return. The ailment is significant enough that he is listed as out for the Chargers' game this weekend. With Kenneth Murray Jr. on IR, the Chargers' linebacker room is only getting smaller now that Tranquill is out.

Donald has had knee swelling since colliding with another player in the Rams' Week 5 win over the Seattle Seahawks. He did not practice Wednesday and was listed as a limited participant both Thursday and Friday. But the star defensive lineman is expected to play Sunday against the New York Giants. "We should be good to go," coach Sean McVay said about injuries prior to Friday's practice. It is trending in that direction, as Donald was a full participant in practice, despite McVay saying he would be a limited participant before they took the field.-- Lindsey Thiry

Cook practiced in full Thursday for the first time since injuring an ankle in Week 2, and backup RBAlexander Mattison (shoulder) is also off the final injury report. -- Courtney Cronin

Thielen missed multiple practices this week because of a foot injury. However, the Vikings have not given him an injury designation heading into their matchup with the Carolina Panthers.

Jefferson, much like Thielen, didn't practice most of the week because of an ankle injury. Despite that, he won't have an injury designation heading into Sunday, a signal that he should be ready to go by then.

Harris was knocked out of the fourth quarter of Sunday's win over the Houston Texans because of an injury to his ribs, and then he didn't practice in Wednesday's full-pads session. He was able to participate on a limited basis Thursday and Friday, though. At the least, the Patriots will likely consider reducing Harris' workload. On the opposite end, it's possible he's not available at all, which would turn things over to rookie Rhamondre Stevenson, second-year player J.J. Taylor and veteran Brandon Bolden. -- Mike Reiss

After having surgery on his right middle finger and being sent to injured reserve, Wilson is officially out for the next three weeks, including Sunday's game against the Steelers. -- Brady Henderson

The Seahawks No. 1 running back in Chris Carson has been ruled out for the second straight week with a neck injury. Expect Alex Collins to start again, with the Seahawks mixing in DeeJay Dallas and perhaps Travis Homer as change-of-pace options against Pittsburgh. Carson may be headed to IR, coach Pete Carroll said Friday. Rashaad Penny is expected to return off IR next week.