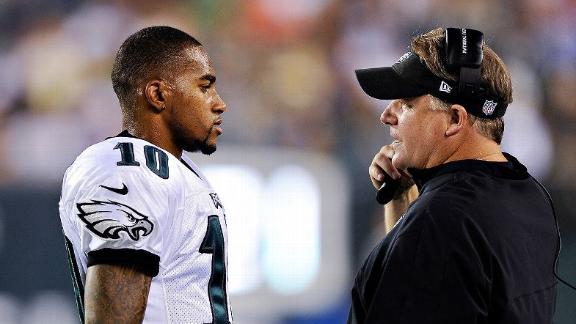 ESPN
DeMaurice Smith, the executive director of the NFL Players' Association, said on Friday that the union will look into the circumstances surrounding DeSean Jackson's release by the Philadelphia Eagles.

The Eagles' decision to cut ties with one of the most electrifying players in club history last week came after the team uncovered information about Jackson's off-field connections and activities, a source told ESPN NFL Insider Adam Schefter.

Smith said the NFLPA will examine whether the Eagles leaked comments or misinformation to the media about Jackson, who signed a three-year contract with the Redskins on Wednesday. That deal is worth $24 million, including $16 million guaranteed, according to league sources.

The Eagles issued a statement saying they decided to release Jackson "after careful consideration."  The team has withheld further comment.

A league source told ESPN's Sal Paolantonio that the Eagles decided to release Jackson for a number of reasons due mostly to "work ethic and attitude."

"To me, the real issue is this is the business of football. If you want to make a decision to cut a player, tell a player he's cut. Make a decision. But if you want to smear a player with innuendo or something that is less than proof ... you know that I was very aggressive in calling a few GMs cowards for what they said about a young man coming out of college [former Missouri defensive end Michael Sam]. It seems to me that the same thing applies ... if you want to smear someone and you don't have any evidence."

Jackson was set to be interviewed by ESPN's Stephen A. Smith later Friday. That interview is scheduled to be aired on "SportsCenter" at 6 p.m. ET.