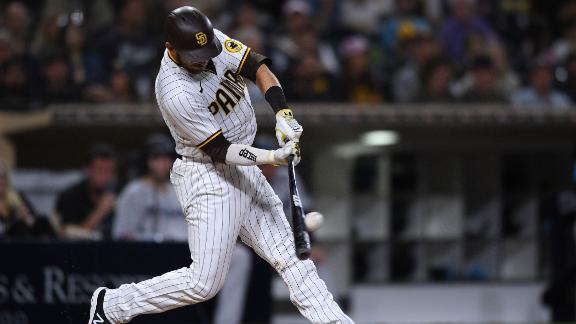 SAN DIEGO -- - Austin Nola hit a go-ahead single in the seventh inning, lifting the San Diego Padres over Miami 6-5 Tuesday night and sending the Marlins to their fifth straight loss.

Nola had two hits and two RBI. He extended his hitting streak to a career-best nine games.


"To be able to get through one of these bullpen games is huge," Nola said.

With the score tied 5-all and Adam Frazier on second base with two outs, Nola hit a sharp single to left field against Richard Bleier (2-2).

"The way Nola is swinging the bat, defensively, all those things, he is doing a great job," Padres manager Jayce Tingler said. "The guys at the bottom of the order are doing a great job either getting on or driving in runs."

Mark Melancon got the last out of the eighth, worked around a leadoff double in the ninth and notched his MLB-leading 34th save.

"We continue to play just solid, really good baseball. Each night it has been a little bit different," Tingler said of San Diego's four-game winning streak. "We got down early but we answered back in the first couple of innings and got right back in the game."

The Marlins, still missing manager Don Mattingly after he tested positive for COVID-19, have dropped six straight on the road.


"I thought I made some good pitches," Stammen said. "Unfortunately the first inning didn't go as I had planned it."

Lewis Brinson hit an RBI single and Jorge Alfaro had a two-run double to put Miami ahead 3-0 in the first.

Jake Cronenworth and Nola hit RBI doubles in the bottom half off Braxton Garrett.

Miami tacked on a run in the second when Miguel Rojas singled home Magneuris Sierra, who led off with a double. Stammen lasted only two innings, giving up four runs and six hits.

San Diego scored twice in the fourth for a 5-4 lead, chasing Garrett.

Rojas hit an RBI double in the seventh that made it 5-all.


Eric Hosmer had two hits and is 23 for 54 (.426) at Petco Park since the beginning of July. That's the highest batting average in the majors at home since July 1 for players with at least 50 plate appearances.

Marlins: RHP Elieser Hernandez (right quad strain) threw 62 pitches over five innings in his third rehab start, second for Triple-A Jacksonville. He is expected back in mid-August. ... 2B Jazz Chisholm Jr. (flu-like symptoms) is headed back to Miami, according to acting manager James Rowson. Chisholm was scratched from the series finale against the Colorado Rockies on Sunday and did not make the trip to San Diego.

Padres: All-Star SS Fernando Tatis Jr. (partially separated left shoulder) was eligible to come off the IL on Tuesday but manager Jayce Tingler said the superstar is "still a ways away" and that there is no timeline. Tatis continues to do work in the outfield in anticipation of a position change when he comes back. "He's progressing well, bouncing back well and able to do a little bit more each day," Tingler said. ... RHP Dinelson Lamet (right forearm inflammation) threw 20 pitches and the next step will be another rehab assignment, another live bullpen session or "or be activated and go."... Reliever Drew Pomeranz came out in the eighth inning with the trainer with forearm tightness. Tingler said Pomeranz will be day-to-day.