Ortiz: No one tested more than me 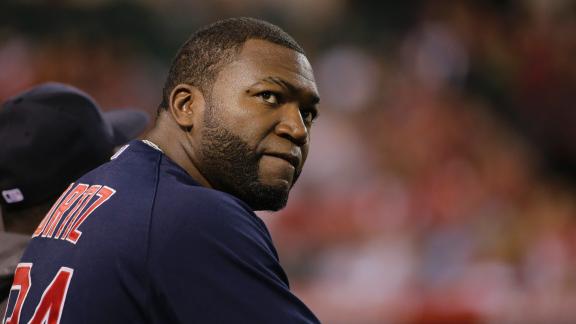 FORT MYERS, Fla. -- Boston Red Sox slugger David Ortiz, in a first-person essay on The Players' Tribune website, reiterated in strong terms that he never has "knowingly used steroids" and said "hell yes" he belongs in the Hall of Fame.

"Let me tell you something. Say whatever you want about me -- love me, hate me," Ortiz wrote. "But I'm no bulls------. I never knowingly took any steroids. If I tested positive for anything, it was for something in pills I bought at the damn mall. If you think that ruins everything I have done in this game, there is nothing I can say to convince you different.''

Ortiz described being home in the Dominican Republic last winter and being awakened by "two American guys holding briefcases" with "pee cups and big needles" who had come to administer drug tests mandated by Major League Baseball.

"In some people's minds, I will always be considered a cheater," he wrote. "And that's bulls---. Mark my words: Nobody in MLB history has been tested for PEDs more than me. You know how many times I've been tested since 2004? More than 80. They say these tests are random. If it's really random, I should start playing the damn lottery. Some people still think the testing is a joke. It's no joke. Ten times a season these guys come into the clubhouse or my home with their briefcases. I have never failed a single one of those tests and I never will.''

Ortiz's name surfaced in connection with steroids in 2009, when the New York Times reported that he and Red Sox teammate Manny Ramirez were among 100 players who had tested positive for performance-enhancing drugs in 2003. MLB first tested players for steroids in 2003, and the results were supposed to be anonymous. The agreement between MLB and the players' association was that if a certain percentage of players tested positive, mandatory testing would begin the following season.

The results, however, was later obtained by federal agents investigating the distribution of PEDs to professional athletes, and the information about Ramirez and Ortiz emerged, according to the Times, through interviews with lawyers and others connected to pending litigation.

Ortiz said he was not aware that he had been identified as testing positive until he saw a report on ESPN.

According to the Mitchell report, which was commissioned by Bud Selig to investigate PED use in baseball and was released in December 2007, the players who tested positive in '03 were notified by the union after the tests were seized by the government.

In The Players' Tribune piece, Ortiz angrily described how he has played under a shadow of suspicion ever since.

"Some people still look at me like I'm a cheater because my name was on a list of players who got flagged for PEDs in 2003," he wrote. "Let me tell you something about that test. Most guys were taking over-the-counter supplements then. Most guys are still taking over-the-counter supplements. If it's legal, ballplayers take it. Why? Because if you make it to the World Series, you play 180 games. Really think about that for a second. One-hundred-and-eighty games. Your kids could be sick, your wife could be yelling at you, your dad could be dying -- nobody cares. Nobody cares if you have a bone bruise in your wrist or if you have a pulled groin. You're an entertainer. The people want to see you hit a 95-mile-an-hour fastball over a damn 37-foot wall.''

Ortiz wrote that he may have have taken an over-the-counter supplement that "all of a sudden MLB comes out and says there's some ingredient in GNC pills that have a form of steroid in them. I don't know anything about it.

"If you think I'm full of it, go to your kitchen cabinet right now and read the back of a supplement bottle and honestly tell me you know what all of that stuff is," Ortiz wrote. "I'm not driving across the border to Mexico buying some shady pills from a drug dealer. I'm in a strip mall across from the Dunkin' Donuts, bro.

"In 2003, MLB wanted to measure what players were taking and figure out some kind of standard. We all got tested and MLB sealed the results. The next year, they said, 'OK, you can't take any pills with this, this and this,'-- all kinds of stuff that was previously in supplements that anybody could buy. They used our tests to figure out what should be considered a performance-enhancer. OK. Fine. Great. Clean it up. I love it. S---, if you catch someone taking PEDs now that we all know the rules and have been educated about what's in these supplements, forget 25, 50 games. Suspend them for an entire year. I don't care, because I'm not doing it."

Ortiz mentioned an encounter he had in 2013 with a newspaper columnist whom he doesn't identify by name -- Dan Shaughnessy of the Boston Globe. He said Shaughnessy approached him and said that because he was older and from the Dominican Republic, he fit the profile of a steroid user and asked Ortiz if he considered himself a "prime suspect?''

"He's saying this with a straight face," Ortiz wrote. "I had taken like 70 at-bats. Anybody can get hot and hit .400 with 70 at-bats. I was stunned. I'm like, I'm Dominican? I fit the profile? Are you kidding me? I wanted to kill this guy. But you can't react. That's what they want. They want you to get angry so they can bury you. So I just smiled at him and asked for his address."

"Why do you want my address?" he said.

"People ask me all the time how I turned into such a monster in my early 30s," he wrote. "'How are you doing this? You must be cheating.' You know how? Physically, I was always a bull. But I learned to play the game with my head and my heart and my b----. I got smarter. I got mentally tougher.

He said that since his name was linked to steroids, he has been asked "a million times" whether he belongs in the Hall of Fame.

"Hell yes I deserve to be in the Hall of Fame," he wrote. "I've won three World Series since MLB introduced comprehensive drug testing. I've performed year after year after year. But if a bunch of writers who have never swung a bat want to tell me it's all for nothing, OK. Why do they write my legacy?

"Let me tell you what I really care about. When we played in Texas a few days later after the news came out, people were screaming, 'Cheater, cheater, cheater!' It was really vicious. My family was sitting right there in the stands. After the game, my son came up to me in the hotel with tears in his eyes and he says, 'Dad, why are they calling you a cheater? Are you a cheater?'

"As a father, that's a moment you're never prepared for. I looked at him in the eye and said, 'No, I'm not a cheater.'