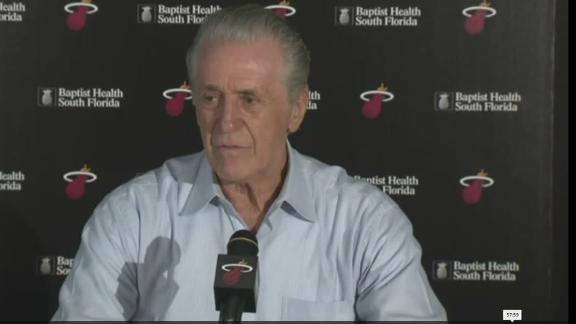 Pat Riley said he regrets letting Dwyane Wade leave the Miami Heat, acknowledging that he was "floored" by the superstar's decision to join the Chicago Bulls in free agency.

Riley addressed Wade's departure during a news conference Saturday, one day after the 13-time All-Star officially signed a two-year deal with his hometown Bulls.

"What happened with Dwyane floored me," Riley said. "I'm going to miss the fact of what I might have had planned for him and his future and how I saw the end and my thought process in how I could see his end here with the Heat. ... It's my responsibility to sort of make that happen. I didn't make it happen. Dwyane left, and the buck stops here."

Wade said last week that a "business" rift with Riley played a significant role in his decision to end his 13-year career with Miami. Wade helped lead the Heat to three NBA championships and is the franchise's all-time leading scorer.

Riley admitted that he was not as involved in the negotiation process as he needed to be in order to retain Wade, who turned down a two-year, $40 million offer from the Heat earlier this month in favor of Chicago's two-year, $47 million offer.