Patty Mills: Warriors one of the NBA's greatest ever teams 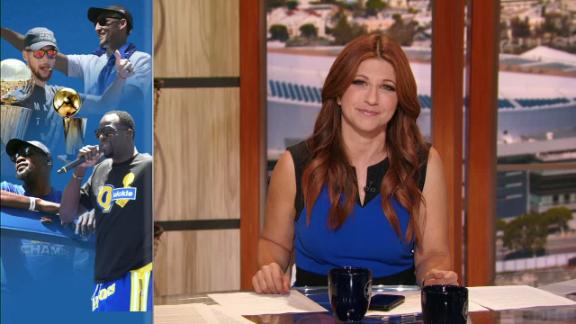 San Antonio point guard Patty Mills believes Golden State are without doubt "one of the greatest teams" in NBA history after Steve Kerr's side claimed their second championship in three years.

The Warriors sailed through the 2017 playoffs with an unprecedented 16-1 record - their only blemish coming in Cleveland in Game 4 of the Finals when the Cavaliers produced an all-time record shooting performance to win by 21 points.

Mills, 28, says the NBA's new benchmark team deserve a lot of credit for their record-breaking campaign.

"They are going to go down as one of the best teams ever and rightfully so," Mills told ESPN. "They have done a tremendous job all year, were hard to beat -- especially in the playoffs -- and deserve a lot of credit.

"They have raised [the benchmark] and that's now what everyone else has to get to if they want to be the last team standing."

Mills knows first-hand just how tough it is to play the Warriors; a team that in 2015/16 set a new record for wins in a season before adding 2014 league MVP Kevin Durant to their roster.

In the absence of Tony Parker, Mills was catapulted into a starting role for the Spurs in their Western Conference Finals clash against Golden State. However, with Klay Thompson guarding him tightly, Mills struggled to find his scoring rhythm and averaged just seven points across a series the Warriors claimed 4-0.

Every time the undermanned Spurs looked to challenge, Golden State was able to flick the switch and score heavily through Durant and Steph Curry - something they were also able to do with ease during the Finals against Cleveland.

However, despite their recent dominance and talks of whether or not they are a new generation super team, Mills says the Warriors aren't unbeatable.

"Everyone is beatable and that's the belief we had against them, especially in the playoffs," Mills told ESPN. "That's what you plan to do. You can't go into any game thinking you're going to lose, I still think they [can be beaten]."