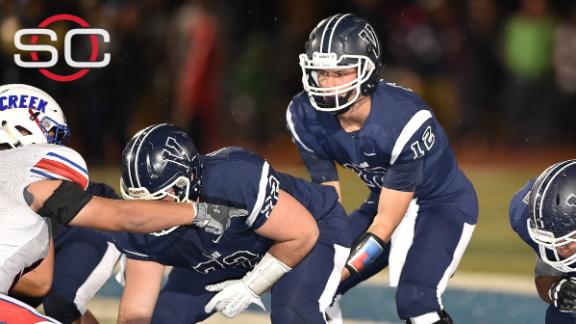 ESPN
By Tom VanHaaren
Quarterback Dylan McCaffrey, the No. 25 prospect in the 2017 class, has committed to Michigan.

McCaffrey is the No. 1-ranked pocket passer in his class, and if the last name sounds familiar, that's because Dylan has two older brothers already playing college football --Stanford star Christian McCaffreyandDuke receiverMax-- and his father is former Stanford receiver Ed McCaffrey.

Michigan coach Jim Harbaugh has ties to Stanford, but not the way the McCaffrey family does. Dylan didn't get an offer from the Stanford staff, however, and ultimately chose the Wolverines.

This commitment keeps the positive recruiting momentum rolling for Harbaugh and his staff, who landed 2016's No. 3 quarterback, Brandon Peters, along with the No. 1 overall prospect, Rashan Gary, all of which helped the Wolverines score the No. 5 recruiting class in 2016.

McCaffrey is the highest-ranked quarterback Michigan has landed sinceRyan Mallett, No. 12 overall, in the 2007 class.