Raiders Derek Carr out of surgery, says it "couldn't have gone better" 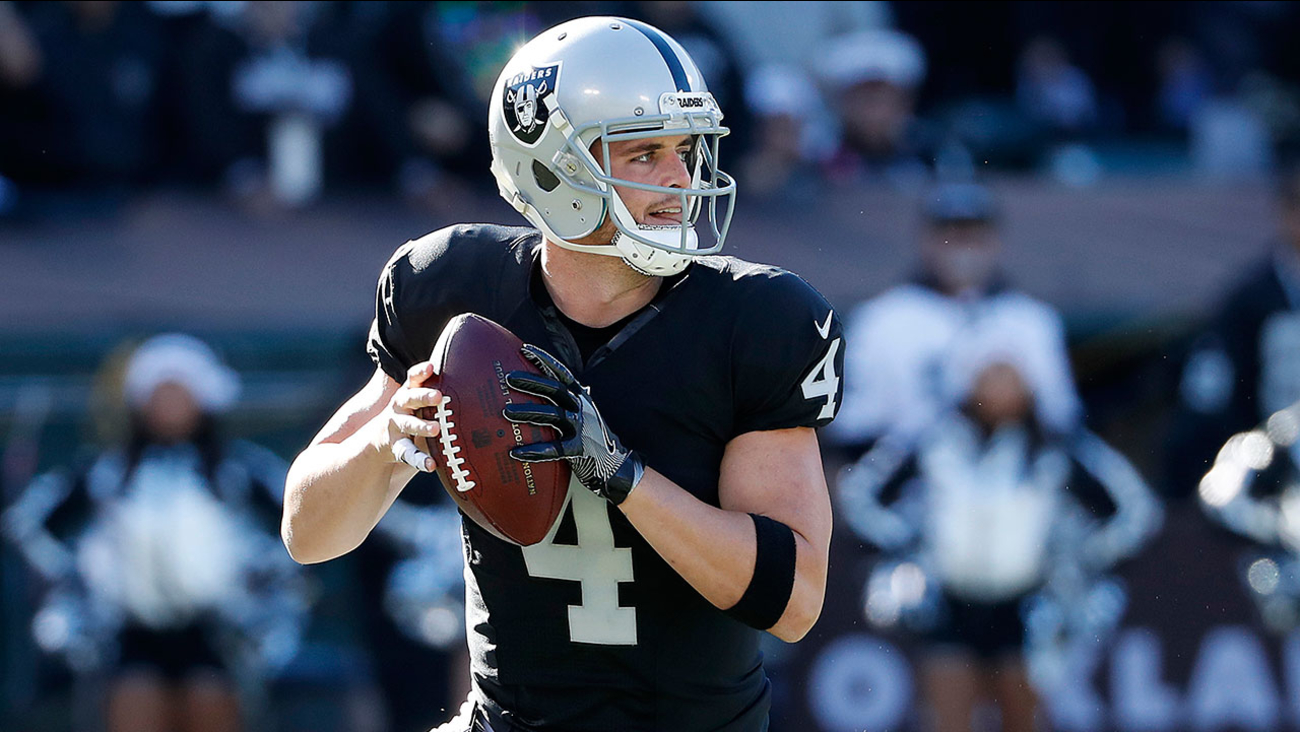 ALAMEDA, Calif. -- While Derek Carr underwent surgery to repair his broken right leg on Tuesday, the Oakland Raiders began preparing for a playoff run without their star quarterback.

Carr's mother, Sheryl Joyner-Carr, wrote on her Facebook page that Carr was out of surgery in Los Angeles and is doing "EXCELLENT!" She thanked fans for their support and prayers.

Surgery couldn't have gone better! Received great news! Already started the recovery process!Thank you for all of your prayers as I heal up!

The Raiders have given no timetable for how long Carr will be sidelined, but his brother, David, said Monday on NFL Network, where he is an analyst, that the initial estimates are he will miss six to eight weeks.

That would leave Carr sidelined until just after the Super Bowl, meaning Oakland (12-3) will rely on backup Matt McGloin for the postseason run. The Raiders can clinch the AFC West title and a first-round bye with either a win at Denver on Sunday or a Kansas City loss in San Diego. If Oakland loses and the Chiefs win, the Raiders will open the playoffs at AFC South champion Houston on wild-card weekend.

"We're up for the challenge," running back Latavius Murray said. "I know Matt is. We're not going to change anything. We're going to go out and execute and do what we do."

They will just have to do it with McGloin under center instead of Carr.

The Raiders believed enough in McGloin to place a second-round tender on him as a restricted free agent this past offseason, but he has had little time on the field since his rookie season in 2013.

While McGloin has thrown just 55 passes since making six starts late that year and Carr was mentioned as a possible MVP candidate with 28 TD passes, 3,933 yards passing and only six interceptions this season, the Raiders don't expect much to change with how the offense is run. The players say both quarterbacks have similar approaches and work ethics, with the biggest difference being in their language.

"They're both great guys," backup quarterback Connor Cook said. "I would just say the only thing is McGloin probably swears a little bit more than Derek. That's the main difference."

While Carr has been bred for the NFL ever since David was the No. 1 overall pick by Houston in 2002, McGloin had to walk on at Penn State before becoming a starter in college, was undrafted in the NFL, and has spent most of his four years as a backup.

McGloin uses those perceived slights as motivation to succeed where others thought he couldn't.

"It's almost like he lives for being that underdog, and that's what fuels him," said tight end Mychal Rivera, who played when McGloin started in 2013. "And it's brilliant. We're going to rally behind him."

McGloin steps into a much better situation this year than he did three years ago when he replaced an injured Terrelle Pryor at quarterback for an Oakland team on the way to a 4-12 record. The Raiders have one of the top offensive lines in the game, anchored by Pro Bowlers Donald Penn, Kelechi Osemele and center Rodney Hudson, and have two top playmakers on the outside in Amari Cooper and Michael Crabtree.

The running game behind Murray and rookies Jalen Richard and DeAndre Washington ranks fifth in the league at 124.3 yards per game and has been even more potent of late with 157.3 yards per game over the past four contests.

Even the defense that struggled mightily early in the season has been much improved of late behind the strong play of pass rusher Khalil Mack.

But to have success, McGloin will need to make plays like the 19-yard pass into coverage he made on a late third down play to Cooper that helped Oakland run out the clock in Saturday's 33-25 win over Indianapolis.

"That was huge," said receiver Andre Holmes, who played with McGloin in 2013. "He put the ball out there for Amari to go up and make a play on it. That's just showing how much confidence he has in Amari to make a play in a big-time moment. That's some of the things he did a lot when he was starting here a few years ago. He understands the abilities that his playmakers have."
Related topics:
sportsderek carrnfloakland raiderscalifornia
Copyright © 2021 by The Associated Press. All Rights Reserved.
CALIFORNIA
Statewide school walkout planned to protest vaccine mandates
PG&E cancels planned shutoffs for 29K customers
PG&E warns about 29K CA customers of possible planned outages
PG&E expected to restore power today to customers impacted by PSPS
TOP STORIES
Man convicted of murdering estranged wife in front of her 3 kids
Large fire rips through 2 homes in Selma
Fresno Co. Social Services looks for long-term plan to house children
California now only state at 'moderate' COVID transmission level
New state law, local agencies cracking down on dangerous driving
Man killed in motorcycle crash in central Fresno, CHP says
Doctors concerned about rising number of Valley Fever cases
Show More
CA vacation home renters targeted with threat, vandalism
Boston-bound jet crashes on takeoff west of Houston with 21 on board
US expected to authorize mix-and-match COVID booster shots
Music equipment stolen from rock band at Chowchilla hotel
Recovery program scrambles after fire burns historic Fresno home
More TOP STORIES News