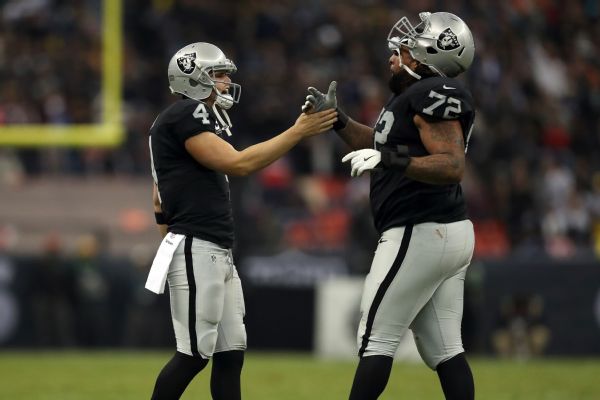 ALAMEDA, Calif. --Oakland Raiders quarterback Derek Carr said Wednesday his posting of Scripture on Twitter the day before had "nothing" to do with a claim that went viral on the Internet. The theory suggests that Carr's offensive line allowed him to get injured because he did not kneel with his teammates during the national anthem in a Week 3 game atWashington.

"It had nothing to do with what was said," Carr said of his post. "I don't give false claims any due. If you see anything, you see I post a lot of Scriptures. And literally, you can ask anybody who has the YouVersion Bible App, that was the Scripture of the Day. And I just posted it, and everyone started, 'Oh, shade, this and that.'

"I'm bigger than that, you know? I don't pay any mind to that kind of stuff because it deters. Making false claims about somebody before you know them, and about a group of guys, that has no business in our world. If we're trying to promote peace and love, I don't think that has any place."

The Scripture that the highly religious Carr posted included the following passage as it relates to Proverbs 13:3.

Many thought he was referencing Miko Grimes, the wife of Tampa Bay Buccaneers cornerback Brent Grimes, who went on an Internet show Tuesday morning to reiterate the conspiracy theory floating around since the Raiders' Sept. 24 game against the Redskins. It initially gained traction on a conservative radio show that week, and Grimes was told the story by a Twitter follower, so she presented it as fact.

Some players have shot down the claims in private since that game, but many more took to social media to dismiss it, from left tackle Donald Penn and punter Marquette King to running backs DeAndre Washington and Jalen Richard to cornerback Antonio Hamiltonand even the wife of Penn andMarshawn Lynch's mother.