ESPN
By Johnette Howard
Franchise relocations in sports are always emotionally overheated affairs. The victorious city celebrates while another city's scalded fans scream. Yet even by that rough standard, Tuesday's decision by NFL owners to approve the St. Louis Rams' relocation to their previous home in Los Angeles was especially fraught. Many St. Louis fans were devastated (if not totally surprised) by the news, while the owners and fans of the San Diego Chargers and Oakland Raiders weren't entirely sure what to think.

The Chargers have a year to decide if they want to join maverick owner Stan Kroenke's Rams at his proposed $1.86 billion stadium/entertainment complex that he's privately financing in the Los Angeles suburb of Inglewood on the site where the Hollywood Park Racetrack once sat. And if the Chargers say no? Mark Davis, son of Al, can accept the option to move the Raiders back to L.A. for the 2017 season. Except Davis has already said he probably won't wait and intends to move elsewhere. (But where? Um, he really doesn't know.)

To help sort out the wild fallout of the past few days, here are 10 questions to ponder while trying to make sense of the NFL's decision:

1. Is Kroenke the new Modell?
Kroenke is a real-estate developer who has parlayed his money into a sprawling sports empire. He was already worth $7.7 billion before this deal, but he's being derided as "$tan" in St. Louis now. According to Forbes, relocating to Los Angeles triples the Rams' value to nearly $3 billion. The way the famously reclusive 68-year-old Rams owner flouted NFL rules and still pulled off this coup was so alternately ruthless and brilliant, he's a contender to join the Dodgers' Walter O'Malley, the Colts' Robert Irsay and Cleveland-turned-Baltimore owner Art Modell in the pantheon of most disliked owners in sports history.

But Kroenke -- who ripped St. Louis as a sports town on his way out -- should realize old grudges die hard. O'Malley was pilloried for moving Brooklyn's beloved Dodgers to L.A. in 1957. Irsay lives in infamy for moving the Colts from Baltimore to Indianapolis via Mayflower vans in the middle of the night. Modell became such a persona non grata in Ohio after moving the Browns to Baltimore in 1995, he admitted the acrimony haunted him the rest of his life. Nineteen years later, a Browns fan still holding a beef made news in 2014 for posting a video of himself urinating on Modell's grave in Pikesville, Maryland.

2. How have fans reacted to the NFL owners' vote?
It depends on where you look. Los Angeles mayor Eric Garcetti rejoiced about the Rams' return. The city of San Diego is vowing to continue fighting to keep the Chargers. The Raiders' Davis hasn't ruled out moving to Toronto, San Antonio or even San Diego if the Chargers join Kroenke in L.A.

But back in St. Louis, folks are predictably incensed. The crowd at the Blues' game against New Jersey on Tuesday night spontaneously broke into chants of "Kroenke sucks" when word of the NFL owners' vote spread.

By the next day, fans were driving by the Rams headquarters in suburban St. Louis and tossing their team jerseys and gear out their car windows. St. Louis native Andy Cohen, host of the Bravo show "Watch What Happens Live," did an on-air spot that featured him giving Kroenke two middle fingers while saying, "This is for you, buddy." Local podcast host Kelly Manno took a more pungent approach, following through on a plan to send $250 worth of animal excrement to Kroenke -- we're not making this up -- through a website called I Poop You.

3. Who really stole from whom?

Los Angelenos point out it was St. Louis that started this whole mess by wooing the Rams from them after the 1994 season, when Georgia Frontiere still owned the team. Many Southern Californians at the time weren't any happier about the Rams' move than Missourians are now. Back then, Los Angeles Times columnist Mike Penner wrote a scathing critique of Frontiere's triumphant arrival news conference in St. Louis that began, "The coronation of Queen Georgia, Empress of St. Louis, was something to behold, assuming you were beholding an air-sickness bag while you watched the live cable feed from Cervantes Convention Center."

Sports agent Leigh Steinberg, then the leader of Los Angeles' "Save the Rams" campaign, told Penner, "It made me sick to my stomach." Steinberg elaborated: "They made it sound like they were putting an end to apartheid in South Africa. This is a naked steal. They are stealing a football team. It's not theirs."

4. What do past and present Rams players think?
Current Rams star defensive end Chris Long and retired receiver Isaac Bruce had typical reactions: They thanked St. Louis fans for everything and said they'd never forget the city. NFL network analyst Marshall Faulk, the Rams' former league MVP, went further afield and said the first call most players probably made was to their real-estate agents -- whereupon someone in L.A. helpfully noted that Hugh Hefner's Playboy Mansion just hit the market for $200 million (give or take a pair of fishnet stockings). And if that's a little pricey for everyone but $tan, there's always the Bossip's Celebrity Cribs page, which has a trove of info on listings, such as Chad "Ochocinco" Johnson's former digs slipping into foreclosure.

5. What about the Chargers and Raiders?
If anyone understood how jilted St. Louis fans felt after Tuesday's vote, it had to be Chargers owner Dean Spanos and the Raiders' Davis, who teamed up to pitch the NFL their alternative L.A. stadium plan in Carson. Spanos is a longtime loyal solider among NFL owners, and he actually walked into the vote thinking his plan was going to prevail -- only to learn the shock of his business life when his compadres foisted a shotgun marriage with Kroenke on him (Kroenke discussed the Inglewood site with Spanos years ago -- then bought it without him, curdling Spanos' trust of him.)

And the Raiders' Davis? He's parodied for style points like his bowl haircut, still using a flip cellphone and driving a 30-year-old Dodge van, but he looked even more hopelessly overmatched next to Kroenke. Afterward, longtime Bay Area columnist Ray Ratto captured the zeitgeist there pretty well with this tweet:

6. Could this decision hurt elsewhere in the NFL?
Sure. Davis had to wince knowing his father's court victory when the NFL tried to block the Raiders' first move to L.A. made Kroenke's end run of him legally possible. Kroenke was daring NFL owners to stop him. And the owners' decision to switch from a public ballot to secret ballot, so even Spanos and Davis weren't sure who was for or against them, didn't play well outside the meeting room, either. Now, there's a very real question: Will many cities be even less inclined to pony up public funds and chase NFL teams?

As longtime NFL observer Mike Florio of ProFootballTalk told radio host Bernie Miklasz earlier this week on 101 FM in St. Louis, "Don't do business with these clowns. They're just going to use you, leverage you. ... There are plenty of owners that don't like what Kroenke is up to. They're concerned that it's going to be harder for the NFL to negotiate these deals in the future. But I just think there's such a fear -- it's largely unspoken -- that Kroenke is going to do whatever he wants to do. ... They're almost cowering."

There's a German proverb for that phenomenon: "Fear makes the wolf bigger than he is."

7. How did Kroenke pull it off?
NFL owners knew they would alienate folks no matter how they voted. But Kroenke's daring move of buying the site in Inglewood last year and then breaking ground before he even had league approval to relocate created a sea of change that he rode to victory. It brazenly exploited Spanos' inability to privately fund a stadium or build one himself and left Davis stuck in a small-potatoes role as a passenger in any relocation-to-L.A. deal.

Kroenke carried the day, too, because of his ability to build successful alliances with less traditional owners such as Dallas' Jerry Jones, perhaps the biggest power broker in the league, and Seattle's Paul Allen, one of the founders of Microsoft. It was also hard to miss Kroenke's glowing talk of Allen's expertise in reaching millennials and Jones' forward-charging attitude. Kroenke left many folks feeling this isn't the old-guard NFL the Maras and Rooneys and Halases and Fords created, even if all four families still own flagship franchises. Handshake deals have been replaced by karate chops.

8. But where exactly was Jones in all this?
Jones built the NFL's first billion-dollar show palace, of course, and he has been riding shotgun for Kroenke for a while now. His statement last year that the NFL couldn't stop the Rams from moving was just the first salvo. Later, when National Car Rental announced in December that it would provide naming rights for a proposed stadium in St. Louis for $158 million, Jones scoffed to The Sports Business Journal's Daniel Kaplan, saying that amount would only "buy a lobby" in an L.A. stadium.

9. What's L.A. getting with a Kroenke-owned team?
Kroenke is far better at real-estate deals than fielding winners. In addition to the Rams, Kroenke owns the English Premier League team Arsenal, the Denver Nuggets, the Colorado Avalanche, MLS's Colorado Rapids and the Colorado Mammoth of the National Lacrosse League. But look: At the start of the week, the Nuggets were ranked dead-last in attendance in the 30-team NBA, and the Avalanche are 22nd in that category among the NHL's 30 teams.

The Rams? Kroenke has owned at least 40 percent of the club since he helped Frontiere move from Los Angeles in 1995. The Super Bowl the Rams won with Kurt Warner and the "Greatest Show on Turf" is old news. Since Kroenke went from minority to majority owner in 2010, the Rams have had six straight losing seasons, and a lowly record of 36-59-1.

10. What's the bright side for St. Louis?
Kroenke isn't likely to handle being overshadowed by the Clippers or Dodgers or Lakers in L.A. any better than he absorbed it in St. Louis. In his 29-page NFL relocation application, Kroenke griped how the Rams were stuck playing second fiddle to Cardinals baseball in St. Louis even though he loves to invoke the homespun tale of how his father gave him his first two names (Enos and Stanley) after Cardinals Hall of Famers Enos Slaughter and Stan Musial.

Fans were not amused. Brad Wesselmann, a 48-year-old IT business analyst, told a reporter, "Was it really necessary to do that to a fan base that supported you all those years?" Others said, duh, maybe it's the Cards' superior trophy count: 11 World Series wins and 19 pennants?

The Rams' L.A. offices are expected to be up and running by perhaps April, or plenty of time for the Rams to prepare to play the next two seasons in the Coliseum, USC's football home. And to at least some St Louis sports fans, the Rams are already out of sight, out of mind.

As one local sportswriter noted Wednesday, only 36 more days until Cardinals pitchers and catchers report to spring training. 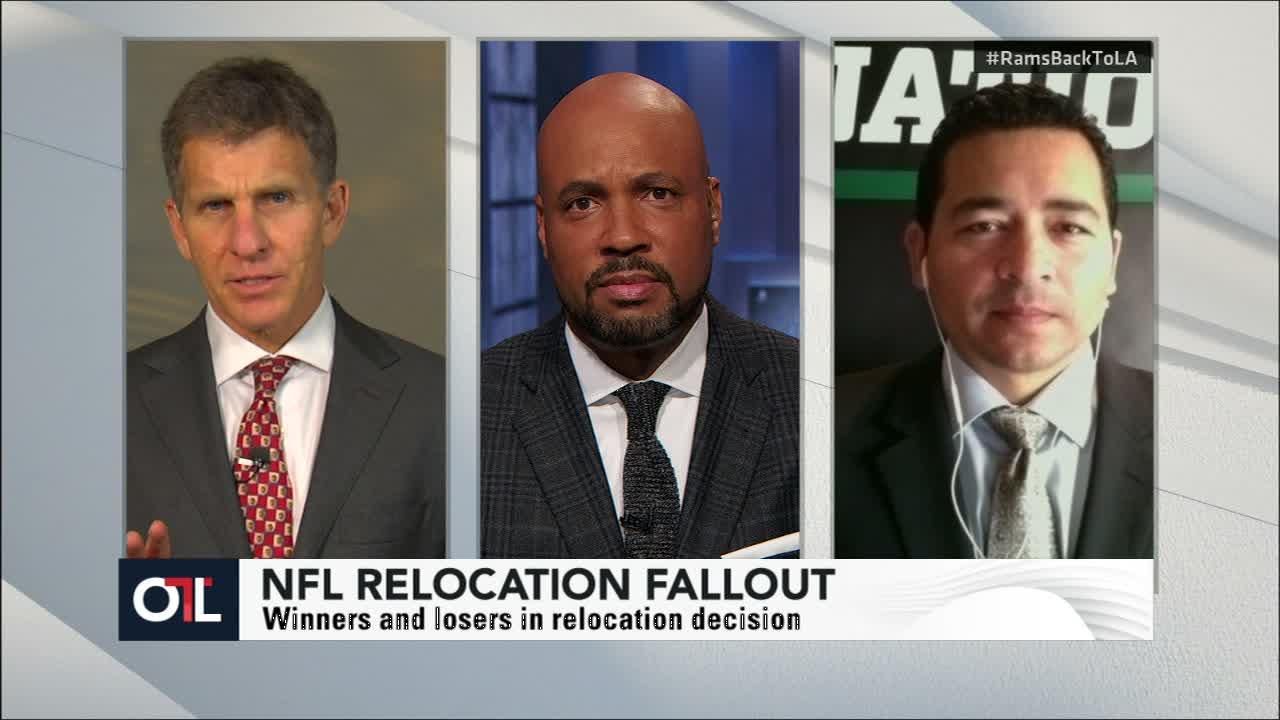