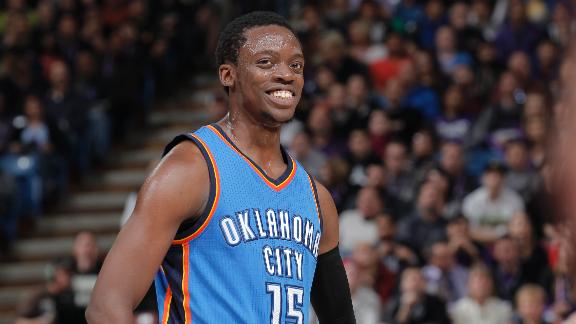 The Oklahoma City Thunder have traded Reggie Jackson to the Detroit Pistons in a three-team deal.

"We're pleased to welcome Reggie Jackson to the organization," Pistons coach and president Stan Van Gundy said in a statement. "Reggie is a young player with good size and length at the guard position. He's been successful as a starter playing extended minutes and we feel he's a good addition to our roster."

According to a source, Perkins is set to be bought out by the Jazz, with potential suitors being the Los Angeles Clippers or Cleveland Cavaliers.

The players dealt wereamong 39 to change hands Thursday, a day that marked the busiest NBA trade deadline day in 25 years.

Jackson, 24, has expressed desire for a starting role, but with the inability to get it in Oklahoma City, his agent requested a trade. Jackson is set to be a restricted free agent this summer and is in search of a contract near the max. Jackson is averaging 12.8 points and 4.3 assists in 28.0 minutes per game, but has seen his playing time significantly dip since the Thunder added Dion Waiters in January.

On Thursday, Jackson tweeted out the news.

He later tweeted out how happy he was.

Kanter, 22, is averaging 13.8 points and 7.8 rebounds in 27.1 minutes a game this season for the Jazz. Augustin, 27, is averaging 10.6 points and 4.9 assists in 23.8 minutes and will fill Jackson's former backup point guard role to Russell Westbrook. Singler, 26, is a 40 percent shooter from beyond the arc and is averaging 7.1 points in 54 games this season.

"It is a rare opportunity to acquire a player like Enes who will be an added dimension to our frontcourt and has his best basketball in front of him," Thunder general manager Sam Presti said in a statement.

The Thunder pushed hard to acquire Brooklyn Nets center Brook Lopez, but they had to adjust with Lopez unwilling to agree to exercising his 2015-16 player option, according to a source.

Information from ESPN.com's Brian Windhorst, ESPN Stats & Information and The Associated Press was used in this report.