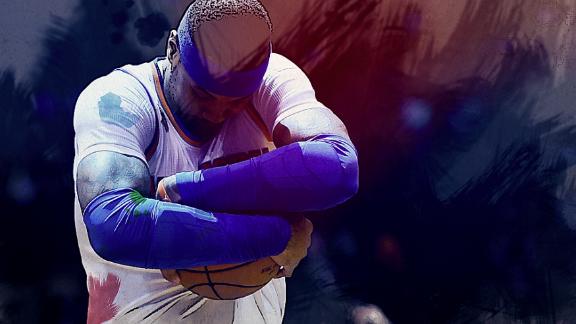 The New York Knicks have let the Clippers know that they are open to trading Carmelo Anthony to Los Angeles without getting back Chris Paul, Blake Griffin or DeAndre Jordan, the New York Daily News reported Thursday.

The Knicks, in fact, would be prohibited from trading for Griffin with Derrick Rose still on their roster; a rule in the collective bargaining agreement says teams cannot have two designated rookie max extensions on their roster via trade. New York acquired Rose during the offseason.

Sources told ESPN that the Boston Celticslet the Knicks know they have no interest in Anthony. There were exploratory talks between the teams last season.

Thus far, the most substantive trade talks regarding Anthony have been with the Cleveland Cavaliers. ESPN's Marc Stein and Chris Haynes first reported Wednesday that Cleveland has turned away New York's pitches of an Anthony-for-Kevin Love swap.

Anthony is one of only three NBA players with a full no-trade clause in his contract. The Cavaliers' LeBron James and Dirk Nowitzki of the Dallas Mavericks are the others.

"I really don't have a reaction to it," Anthony said Wednesday night when asked about the proposed trade to Cleveland. "I mean, until management comes to me and says something, it's not something I can look forward to or feed into at this point."

Anthony, 32, is earning $24.6 million this season and has two years left on his Knicks contract worth nearly $54 million. The final year of the deal is at Anthony's option in 2018-19, and the contract contains a 15 percent trade kicker that would hike his salary to over $28 million if he is dealt.

Teams looking to steal Melo away from Knicks?
Frank Isola evaluates the Clippers' attempts to acquire Carmelo Anthony from the Knicks without giving up Chris Paul, Blake Griffin or DeAndre Jordan.