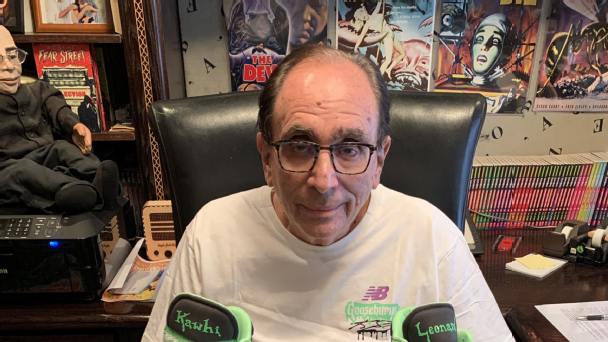 R.L. Stine is going spooky mode for the NBA playoffs.

The 78-year-old author and producer, who has sold hundreds of millions of books and whose "Goosebumps" series has a permanent place in the young adult section of many libraries, posted a photo of his brand new pair of "Goosebumps" inspired Kawhi Leonard New Balance sneakers. The sneakers and a similarly-themed t-shirt have been released worldwide for the NBA playoffs.


Visually, they hearken back to old-school novels from his signature series, with an orange, green and black color scheme and writing in the series' distinctive font. Though Leonard won't have a chance to debut them anytime soon -- he was inactive this season recovering from an ACL tear and his Los Angeles Clippers lost in the play-in tournament -- seeing Stine with them is, for fans of a certain age who remember being scared of "Night of the Living Dummy", probably promotion enough.