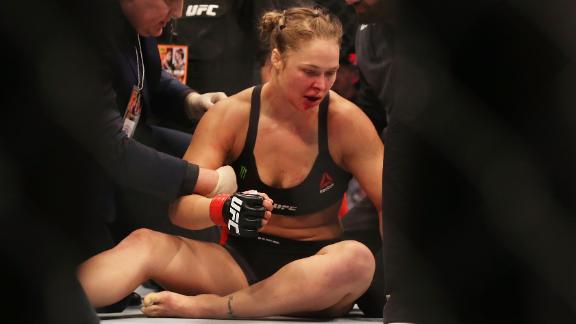 She might have lost Saturday, but Electronic Arts is sticking with its decision to put Ronda Rousey on the cover of its UFC 2 video game.

EA announced Friday morning that Rousey will still appear on the cover of the game to be available on XBox One and Playstation 4 in the spring but could be pre-ordered immediately. Less than 42 hours later, the previously undefeated Rousey was knocked out in the second round by Holly Holm.

EA Sports spokesman Brad Hilderbrand confirmed Monday that Rousey will still grace the cover along with a male fighter who has yet to be announced.

Rousey, a former judo Olympian, was unbeaten through 12 UFC fights before she met Holm. A win Saturday would have been Rousey's seventh title defense. Instead, Holm, a 34-year-old veteran boxer from Albuquerque, New Mexico, has the championship belt.

Rousey was hospitalized following Saturday's fight in Australia but posted on Instagram on Sunday that following some time off she will be back.

UFC president Dana White said a likely rematch between Holm and Rousey would put other potential matchups on the backburner.

"We don't make fights the night of the fight, but the rematch makes a lot of sense," he said. "The rematch is what the people want to see."