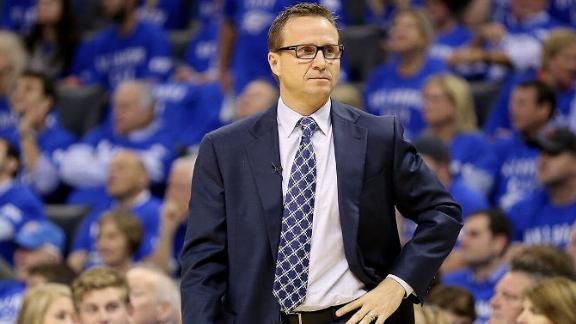 "I understand, we all have a tendency to look at the last game, or the last series. I respect that. That's part of sports," Presti said of Brooks. "I can't do that. I'm looking at a body of work. I'm looking at an understanding of what drives our success and the way in which we've gotten to this point.

"You have to look at yourself critically every year and that starts with me, that starts with everyone in the program, and I think Scott will do the same and come back a little bit better."

The Thunder, who were eliminated in six games by the San Antonio Spurs in the Western Conference finals, won 59 games this season despite Russell Westbrook missing 36 games. The Thunder battled a rash of injuries, which meant their regular starting five played together in only about 30 percent of their games.

"I think we've got a heck of a base," Presti said. "But to be a high-performing team year after year after year, self-evaluation and understanding your strengths and where they can go to are really important."

Brooks said last week that he hadn't even considered the possibility of not being with the Thunder next season. He also picked up emphatic endorsements from both Kevin Durant and Westbrook.

"That's our guy," Durant said at the team's exit interviews. "I'm riding with him."

Presti and the Thunder are faced with a potentially eventful offseason given the likely retirement of Derek Fisher and the free agency of Caron Butler and Thabo Sefolosha leaving available roster spots. The Thunder also can begin contract extension negotiations with guard Reggie Jackson, who blossomed in his third season.

"We are going to make a concerted effort to try to work something out with him, and that works for everybody," Presti said. "If that doesn't happen, then we'll pick the conversations up the following summer and see where that leads us."

Asked directly about the possibility of trading Jackson if an extension isn't reached -- a la James Harden -- Presti was straightforward.

"That's not something that we're considering, no," he said.

Also not considered at this point, Presti said: using the amnesty clause on center Kendrick Perkins. The polarizing big man will earn $9.4 million in the final year of his contract next season.

"Kendrick, as we know, is someone that's contributed to a lot of our success," Presti said. "Quite honestly, we'd be having this press conference a lot sooner if he had not been part of the organization when we took the floor against Memphis."

The team obviously had high expectations to compete for a championship this season, and failed. But with a core of players with an average age of just 25 years old, the Thunder will return a team that should be positioned to compete at the top of the West again next season.

"We're in a very manageable salary-cap situation financially and, most importantly, strategically -- both coming into this summer and looking out for the future," Presti said. "We always want to be in a position where we have flexibility to retain core players and make adjustments and additions. We feel like we're positioned well to be able to sustain the performance of the team."