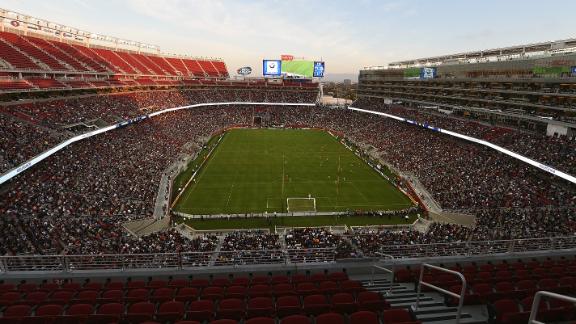 The NHL announced Wednesday that the Pacific Division foes will meet at the 49ers' new home in Santa Clara on Feb. 21. The $1.2 billion Levi's Stadium beat out the San Francisco Giants' cozier confines at AT&T Park for the game, which is part of the NHL's growing Stadium Series.

This will be the second straight year the NHL has staged an outdoor game in California. The Anaheim Ducks beat the Kings 3-0 at Dodger Stadium in front of an announced crowd of 54,099 on Jan. 25.

"We think this will be one of the bigger sporting events the Bay Area has ever seen," Tortora said.

In the latest and perhaps most dramatic chapter of the playoff history between these franchises, the Kings eliminated the Sharks in the first round last season to become the league's fourth team to win a best-of-seven series after losing the first three games. Los Angeles went on to win its second Stanley Cup in three years.

"The growing excitement around NHL hockey in California, the intensity of last season's playoff series between these teams and the state-of-the-art setting at Levi's Stadium will bring a thrilling new dimension to the Kings-Sharks rivalry," NHL commissioner Gary Bettman said in a statement.

The NHL has been taking its game to iconic outdoor venues more and more over the past decade.

The new Yankee Stadium, Boston's Fenway Park, Chicago's Wrigley Field and Michigan Stadium in Ann Arbor are a few of the notable names to host hockey in recent years. The league previously announced that the Washington Capitals would host the Chicago Blackhawks in the 2015 Winter Classic on Jan. 1 at a site to be determined.

The Sharks will be the 14th team since 2003 to host an outdoor game. The league has averaged 56,942 fans at each of those contests.

Tortora said the Sharks began serious bidding for an outdoor game last summer. He said the league held off until it saw how the Kings-Ducks game at Dodger Stadium played out.

The temperature for that contest in Los Angeles was 63 degrees, but concerns about ice conditions turned out to be unfounded. Tortora said the success of that game paved the way for another one in a more temperate climate.

The weather in Santa Clara is typically warmer and drier than in more scenic San Francisco, which is about 45 miles north, but Tortora said it was more of a competition between venues than cities.

While the Giants' waterfront ballpark offered dramatic backdrops of the Bay Bridge and San Francisco skyline for television viewers, Tortora said the league chose the 49ers' digs because football stadiums typically offer better sight lines, more flexibility on the rink's configuration and the ability to host a larger crowd.

AT&T Park holds about 42,000 fans. Tortora said the larger Levi's Stadium will help lower the average price of a ticket, which he said will cost $150. He said 44 percent of the tickets will be priced below that.

"I don't think a sellout will be a major concern," he said.