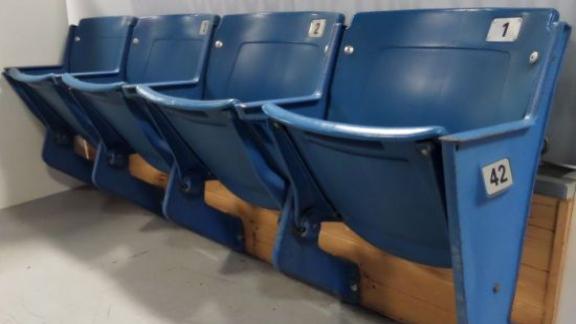 ESPN
By Darren Rovell
A two-day auction featuring the entire remnants of the Pontiac Silverdome might have been more appropriate for a contractor than a Detroit Lions fan.

The most valuable piece sold? The copper wiring in the building, which went for $89,126, including buyer's premium.

Equipment sold included pretzel warmers, grills, drinking glasses and office furniture. The strangest part of the auction might have been the bidding on the bathrooms.

More than 25 entire bathrooms were sold -- including urinals, sinks, soap dispensers and stall partitions -- mostly for $5 each with a removal fee of between $150 to $500 per bathroom.

"People usually buy those for the partitions, which they can repaint and use or use metal to scrap," said Richard Montgomery, owner of RJM Auctioneers. "They usually leave the urinals. I certainly wouldn't want one."

For Lions fans, the highlights were the two turf end zones with "Lions" on them, which sold for $1,950 each, and a "Welcome To Super Bowl XVI" sign that went for $914.

Silverdome seats were sold for a flat fee. Single seats cost as little as $100, while four adjoining seats could be purchased for $360.

Montgomery didn't have the final numbers as of Wednesday afternoon, but said he suspected that the auction raised $1 million, or $417,000 more than what the buyers paid for the building.