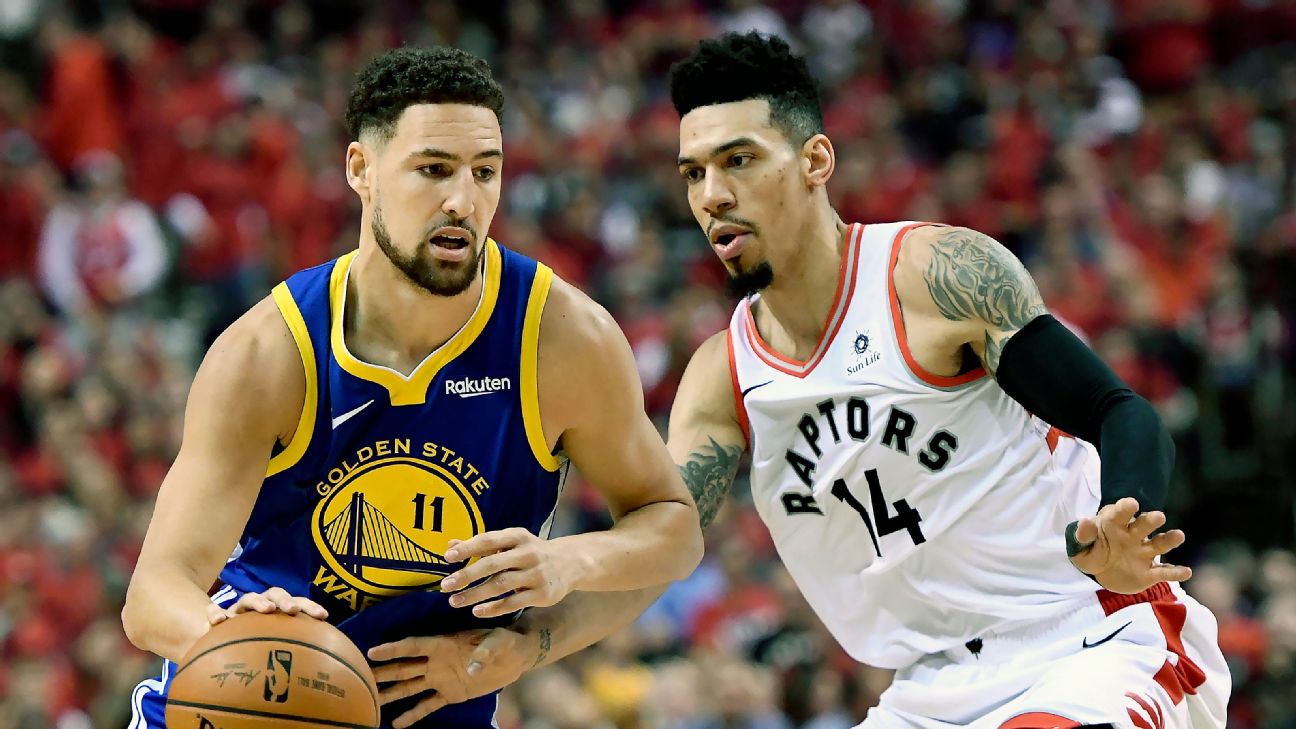 ESPN
By Jackie MacMullan
TORONTO -- The champions cranked into overdrive with such ferocity and cold-blooded efficiency, it was as if the Toronto Raptors were unsuspectingly mugged in a dark alley after midnight.

Never mind that the Golden State Warriors implemented the theft of these NBA Finals under the bright lights of the Scotiabank Arena in front of 19,800 incredulous witnesses wearing red shirts and the stupefied daze of a crowd that just had their wallets swiped. This is what coach Steve Kerr's team does when it discovers its collective rhythm, feeding off a savage defense that clamps down with impunity, extracts turnovers and transforms them into transition artistry that douses the spirit of even the most resilient opponent.

Golden State returns to the Bay Area having stolen home-court advantage with a 109-104 Game 2 victory. The soul-crushing 18-0 run to begin the third quarter highlighted every weapon in the Warriors' arsenal: the aforementioned crippling defense, devastating 3-point shooting and the kind of deft passing that keeps the ball moving and the defense guessing. It transformed a 59-54 halftime deficit into a commanding 72-59 lead that altered the tenor of this series.

For context, understand that the Warriors trailed by 12 points in this game, on the road, and they were, again, playing without the services of Kevin Durant. They started DeMarcus Cousins, who is still working his way back from a torn quad muscle, and asked him to log 27.5 minutes. They withstood a trio of scares: when Steph Curry briefly retreated to the locker room to address flu-like symptoms or dehydration, depending on whom you asked; when Iguodala left the floor after being powdered by a stout Marc Gasol screen; and when Klay Thompson crumpled to the court after injuring his hamstring early in the fourth quarter. The hobbled Splash Brother will undergo an MRI when the team gets back to Oakland on Monday.

"Klay said he'll be fine," Kerr said after the game, "but Klay could be half-dead, and he would say he would be fine.''

With their most redoubtable players limping to the finish, the Warriors needed -- and got -- a pair of gigantic 3s from Quinn Cook to stay afloat. They needed -- and got -- some spirited cameo minutes from Andrew Bogut, who had played a grand total of 47 minutes since the start of the second round entering Sunday.

They looked to their battered veteran, Iguodala, who was encased in ice postgame to ease the woes of multiple body parts, to seal the victory in the final seconds with a dagger 3-pointer.

In other words, it wasn't just the usual suspects who tipped the scales for Golden State.

"We've been through a lot," Iguodala said. "All everyone sees is a lot of winning, and it's easy, and it looks like we're overpowering everybody. But a lot of work goes into that. And we've had to fight these injuries, every year ..."

As the visiting team savored a win that left the players physically and mentally taxed, you had to wonder how the hometown Raptors will reconcile failing to capitalize on the opportunity before them, with Golden State's depth depleted and Curry, the consummate marksman, faltering in the early going.

Another player might have allowed a shooter's most dreaded affliction -- doubt -- to envelop him in a warm embrace after more than 16 minutes of nothing but misses, but Steph Curry is not like most players. (Ask the Houston Rockets about that.) Golden State's supernova watched his first six consecutive offerings roll off or clang short, but it did not deter him from continuing to fire away or from believing the next one would go in.

Stop me when you've heard this before. Curry, the poster boy of positive self-talk, finally connected on his first field goal with 2:50 left before halftime, then went on to drill six of his final eight, including one of his trademark floaters during the game-changing spurt.

During that 18-0 beatdown, the Raptors missed eight straight shots and turned the ball over five times. They rushed, they pressed, and they crumbled under the weight of Golden State's incessant pressure.

"It felt," Toronto veteran Danny Greensaid, "like we forgot how to play basketball for a second."

Although the beauty of their ball movement and incredible range has long been the Warriors' calling card, they actually win games when they lock down defensively.

By the time Fred VanVleet stemmed the hemorrhaging with a corner 3 midway through the third quarter, the Raptors had gone 5:40 without scoring.

Leonard, who was once again harangued and trapped and forced to the sideline, leaving him with uncomfortable looks and challenging angles, checked out with 34 points but did it on 8-of-20 shooting and coughed up the ball five times. Golden State bumped and bodied him and made him earn every look at the basket. Pascal Siakam, the darling of Game 1, was forced into the half court, unable to roam free as he had done just three days earlier.

Once the Warriors got rolling, their championship pedigree revealed itself in its full glory.

"When you come to a timeout after a couple runs like that and everybody's involved, whether they're scoring or setting screens or making the assist or whatever the case is, everybody feels good, and the vibe is just solid," Curry said.

Who knows how everyone will be feeling come Game 3? Is Thompson really fine? Is Durant's return imminent? Will Cousins be sore? Will Iguodala be able to shed some of those ice packs?

The message in the locker room was unanimous: It doesn't matter. The Warriors are going home, and they are flush with Toronto's house money. 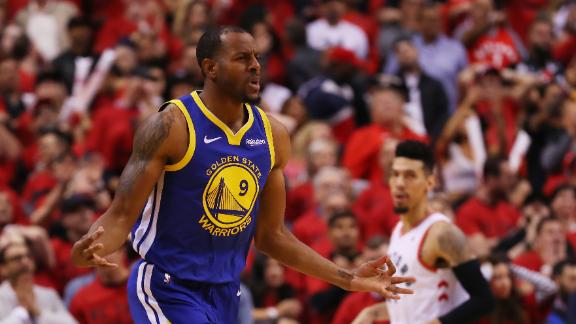 The anatomy of Iguodala's Game 2 dagger
In the final moments of Game 2, Shaun Livingston made a crucial play on Steph Curry's pass and found a wide open Andre Iguodala for the dagger 3. 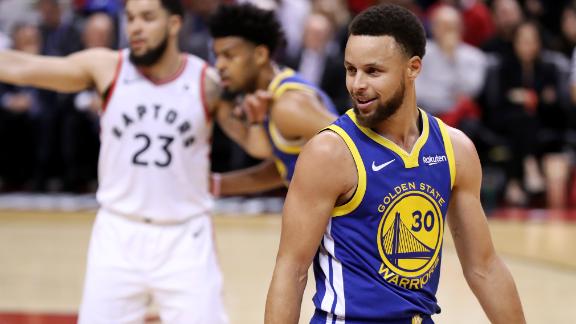 Warriors use big third quarter to take Game 2 and even series
The Warriors hold off the Raptors in Game 2, and the series is tied heading back to Golden State for Game 3.
Report a correction or typo
Related topics:
sportsespnklay thompsondemarcus cousinsgolden state warriorsstephen currydraymond greennba
Copyright © 2020 ESPN Internet Ventures. All rights reserved.
More Videos
From CNN Newsource affiliates
TOP STORIES