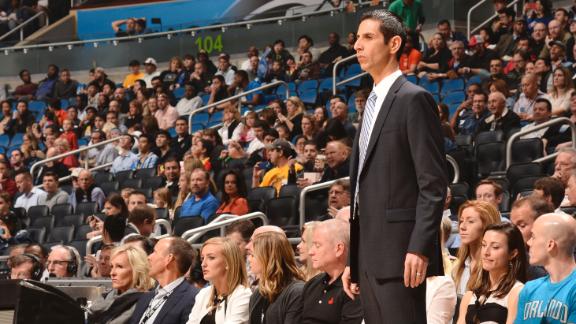 The Orlando Magicwant interim coach James Borrego to lead the team for the rest of the season, according to league sources.

Sources told ESPN.com that the Magic, after initially flirting with the idea of making an in-season veteran hire in the wake of Jacque Vaughn's firing, now intend to let Borrego coach the team for the final 26 games of the regular season while undertaking a wide-ranging search for a long-term replacement.

The Magic are 2-2 in Borrego's four games as interim coach since the dismissal of Vaughn, with victories over the New York Knicks and Los Angeles Lakers. It's believed that Borrego will likewise have a chance to state his case for the job full time, depending on what happens for the rest of the season.

Borrego, who served as an assistant coach in San Antonio and New Orleans before working under Vaughn in Orlando, is NBA's youngest coach at 37.

The Magic had picked up Vaughn's option for next season this past summer, but they dismissed him after a 15-37 start to the season and a 10-game losing streak. The Magic's .269 win percentage (58-158) over the past three seasons under Vaughn was the worst in the NBA during that span, according to ESPN Stats & Information.

"We went into this season wanting to see some progress," Magic general manager Rob Hennigan said last week. "We wanted to see growth. We just didn't feel like we were seeing the type of growth we wanted to see. We're finding ourselves in sort of a rut ... but it's a road bump, not a roadblock."

With the club essentially starting over, Orlando was patient with Vaughn while the Magic posted a 43-121 mark over his first two seasons. But Orlando had the same 15-37 record through 52 games that it had last season, with numerous injuries offsetting the infusion of eight new players to fortify the roster around young cornerstones Nikola Vucevic and Victor Oladipo.