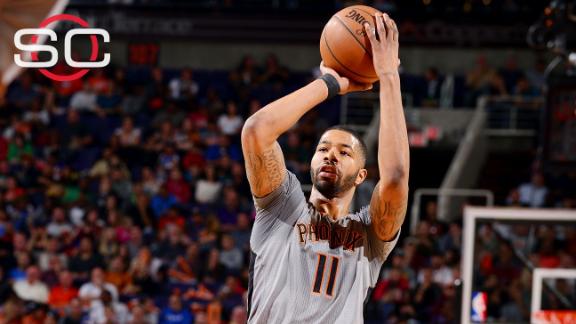 ESPN
By Marc Stein
The NBA has fined Phoenix Suns forward Markieff Morris a sum of $10,000 for publicly demanding a trade.

The league's official announcement Tuesday cited a "public statement detrimental to the NBA." Sources told ESPN.com that the decision to sanction Morris was clinched after a tweet last week stating that "my future is not in Phoenix."

That tweet followed a lengthy interview with the Philadelphia Inquirer in early August in which Morris announced in regards to the coming season with the Suns: "One thing is for sure, I am not going to be there."

Morris' dismay stems in large part from the Suns' decision to trade his twin brother Marcus Morris to Detroit in July. The Morris twins agreed to contract extensions in September 2014 at what was widely considered a discount, with the two deals totaling a combined $52 million, in hopes of being able to ensure they would keep playing together.

The Suns struck a verbal agreement in July to trade Marcus Morris to Detroit as part of a salary dump designed to give Phoenix sufficient salary-cap space to sign LaMarcus Aldridge, which naturally would have had an impact on Markieff Morris, as well. Aldridge wound up spurning the Suns to sign with San Antonio, but the trade of Marcus Morris, Reggie Bullock and Danny Granger to the Pistons went through as planned.

Since the 2005-06 season, public trade demands have been deemed by the league to be "statements detrimental to the NBA" and thus subject to fines. The first player to receive such a fine was Metta World Peace, then known as Ron Artest, for publicly requesting a trade from the Indiana Pacers.

Trade demands that are reported by the news media but not publicly stated by the player or his representatives -- such as Goran Dragic's camp privately asking for a trade in February and having that wish granted by the Suns days later -- are not subject to league sanction.

This season will be the first of Markieff Morris' new four-year, $32 million deal. He is required to report to Phoenix by Sept. 28, with Suns training camp opening the following day, or potentially will face suspension without pay.

The Suns, to date, have shown no inclination to trade Markieff Morris, especially after missing out on Aldridge.

"I've got to show up, no question," Morris told the Inquirer in last month's interview. "You can't do that. I will be a professional. Don't get me wrong.

Numerous Suns players already have arrived in Phoenix to begin informal workouts together, but Morris is not among them.

In the Inquirer interview, though, Morris insisted that the fact neither he nor his brother received advance warning about the trade -- as opposed to the trade itself -- is what set off both.

The Arizona Republic reported recently that Marcus Morris' behavior last season, which included yelling at Suns coach Jeff Hornacek during a game, played in role in the trade.

Unclear is whether a pending legal case against the twins was also a factor. Markieff and Marcus Morris pleaded not guilty to two counts of felony aggravated assault after a January incident in which the twins were accused of helping three others assault a man outside a Phoenix recreation center.