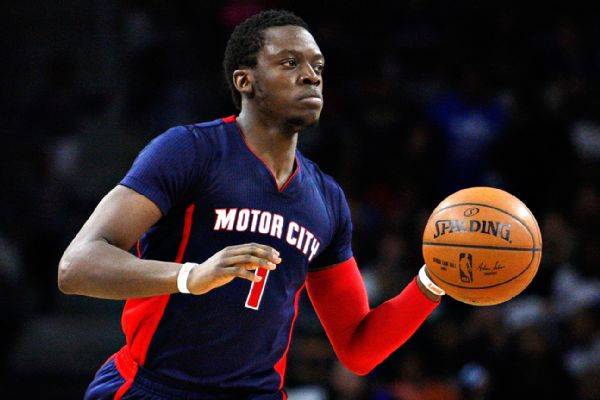 The Detroit Pistons have discussed a trade with the Orlando Magic that would send point guard Reggie Jackson to the Magic in exchange for a package headlined by D.J. Augustin and Jeff Green, according to league sources.

While it's not yet clear whether these talks will progress past the discussion phase, sources told ESPN.com that the Pistons have continued to gauge the market for Jackson in advance of Thursday's trade deadline.

The Pistons could elect to keep Jackson, but Orlando is the second confirmed team that Detroit has engaged on a potential Jackson trade. Last month, ESPN.com reported that the Pistons and Minnesota Timberwolves had discussed a multiplayer swap featuring Jackson and Wolves point guard Ricky Rubio, which a day later prompted Pistons coach and team president Stan Van Gundy to publicly assure Jackson he wouldn't be dealt to Minnesota.

If the talks with Orlando progress to a serious stage, Detroit would have to include at least one more player to make the salary-cap math work.

In the second year of a five-year, $80 million deal, Jackson is averaging 15.2 points and 5.6 assists. But the Pistons -- who expected coming into the season to make a bid for home-court advantage in the first round of the playoffs -- are 16-20 since the 26-year-old returned to the lineup. Detroit got off to an 11-10 start when Jackson was out to start the season, recuperating from persistent knee tendinitis.

In an interview with Lowe published earlier this week, Van Gundy acknowledged: "Reggie came back, and we've struggled ever since."

Referring to backup point guard Ish Smith, Pistons center Andre Drummond told Lowe: "We found a groove with Ish. And when Reggie came back, it has been a big adjustment."

Drummond, though, also made it clear to Lowe that he supports Jackson, saying: "Reggie is my best friend. I'll always have his back. We are going to figure this out."

Lowe's report also revealed that Jackson was criticized by a few teammates in December during a players-only meeting shortly after he returned to the lineup.

"The way they came at Reggie wasn't cool," Drummond told Lowe. "You can't beat a guy up for not playing at 100 percent right after coming back. Guys who have played with pain -- you think they would be more sensitive."

Orlando's interest in Jackson is understandable from the perspective that Magic general manager Rob Hennigan was part of the Oklahoma City front office when the Thunder drafted Jackson. But a trade, if it went through, would naturally raise questions about the Magic's plans for third-year point guard Elfrid Payton, who was also drafted by Hennigan.

In January, Van Gundy confirmed ESPN.com's report that the Pistons and Timberwolves had discussed a Jackson-for-Rubio swap, but then announced that he had assured Jackson that he wouldn't be dealt to Minnesota.

"I texted Reggie and just said, 'This is crazy season, and we're not trading you for Ricky Rubio,'" Van Gundy said in January.

"That was it. I don't normally address it, but the fact that it was out there and it concerned his agent [Aaron Mintz] enough to call, I addressed it.