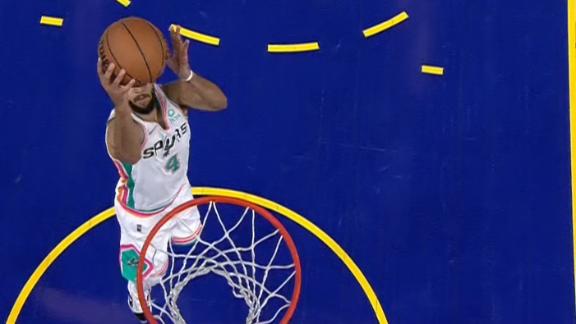 The Spurs closed the game with an 8-1 run to win their fourth straight.


Stephen Curry scored 27 points and Jordan Poole added 15 for Golden State, which was playing a night after snapping Phoenix's 18-game winning streak in a matchup of the NBA's top teams.

"We didn't panic," White said. "They were up three and we just answered and found a way to win. It's not a good recipe for success. We want to keep the leads that we have, but just stay with it, compete and good things happened tonight.

"We knew they were going to go on a run. They're the Warriors, they've been doing it for years."

The Warriors trailed by as many as 22 early in the second quarter and by 18 in the third.

"We're thrilled because they are who they are and we could still get the win, although we know we caught a break," Spurs coach Gregg Popovich said.

Lonnie Walker IV scored 21 points coming off the bench and Keldon Johnson added 15 for the Spurs.

"The Spurs were great," Warriors coach Steve Kerr said. "They took it to us right from the outset. They came in playing well, they had a ton of energy, they ran right through us, right past us.

"We just had a tough time getting going, but the fact that our guys gave themselves a chance in the second half with that competitiveness was indicative of the kind of team we have and the kind of guys we have."

"They really showed their championship mettle by coming back and playing as hard as they did," Popovich said.

"You can see why it's a special program and why they're championship-caliber guys. It's not just about the talent, it's all the other stuff and they've got it in spades."

Spurs: At Phoenix Monday night. Phoenix beat the Spurs 115-111 on Nov. 22 in the only meeting between the teams this season.