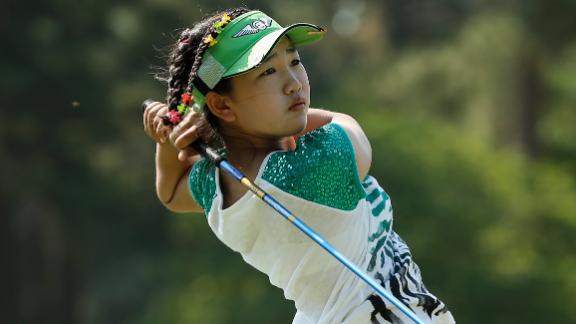 Lucy Li made history last month when she became the youngest golfer ever to qualify for the U.S. Women's Open.

But with the major championship kicking off Thursday morning at Pinehurst No. 2 in North Carolina, not all players in the field feel an 11-year-old should be teeing it up beside them.

Stacy Lewis, the top-ranked women's player in the world, voiced concerns that a sixth-grader from the Bay Area is competing in such a big event at such a young age.

Young players competing in the U.S. Women's Open is nothing new.

Too young? Both have gone on to win major championships.

"Look, if you're good enough, you're old enough -- or young enough, whichever way you look at it," tour veteran Laura Davies said. "If you can play the golf and you can qualify, then have a go. What's the worst that can happen? She shoots a million this week and everyone says, 'Wasn't it great she was here?' So I don't think anything bad can come out of it because she's too young to worry about the pressure.

"She's just having fun. She's got a week off school. It's perfect."

Michelle Wie agrees. Wie was 13 when she played in her first Women's Open and has been asked a lot about Li this week.

"A lot of people ask me, 'Is that too young? What do you think?'" Wie said. "It's a memory that will last her a lifetime. What other 11-year-old can say that they played in the U.S. Open at Pinehurst and got to see the men play as well, too?"

Information from espnW's Mechelle Voepel and The Associated Press was used in this report.