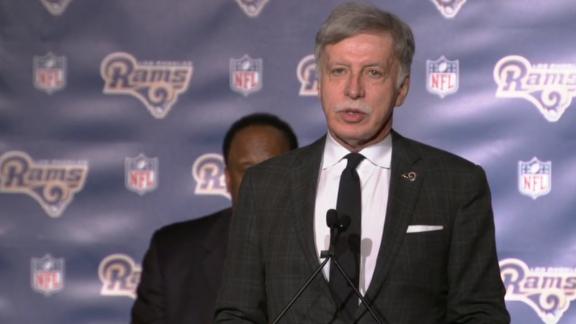 LOS ANGELES -- Rams owner Stan Kroenke was brought to tears at the end of his remarks at the Forum, his first since NFL owners approved his team's relocation to Los Angeles earlier this week.

"We're happy to be here," Kroenke said. "It's quite a privilege. We're looking forward to moving ahead on this. The fun part for us really starts, coming in here today and being received like this is wonderful.

Kroenke said after a 30-month journey he's finally home. He was introduced to chants of "We love Stan" from a couple of hundred fans dressed in L.A. Rams garb who showed up for the introductory news conference Friday.Former Rams players such as Jackie Slater, Jim Everett, Lawrence McCutcheon and Wendell Tyler were on hand for the homecoming.

On Tuesday, the league's owners voted 30-2 to send the Rams and Chargersto Los Angeles to play in Kroenke's proposed $1.86 billion stadium in Inglewood. The Chargers have the option to stay in San Diego and move to Los Angeles for the 2017 season. However, the Rams will move in time for the 2016 NFL season.

The approval of the Rams and Chargers in Inglewood ends a two-decade drought without professional football in Los Angeles.

Kroenke said the plan is to bring big events such as the Super Bowl, Olympic events and the Final Four to Los Angeles. The new stadium will seat 70,000, with the ability to expand to 80,000.

The Inglewood stadium is scheduled to open in the fall of 2019 and is part of a larger, mixed-use development on the 300 acres at the former Hollywood Park.

The Rams will maintain temporary offices and a practice facility at the team's current Rams Park facility in St. Louis until they can build a more permanent home.

And while the Rams haven't finalized a location in Los Angeles for immediate use, general manager Les Snead said the hope is that the team can be up and running in time to hold offseason workouts in Los Angeles once they are scheduled to begin in April.

COO Kevin Demoff confirmed several other details of the move, saying the Rams will play the upcoming season downtown at the Coliseum, their home from 1946 to '79. They'll start selling tickets Monday at prices comparable to last year's rates in St. Louis.

Kroenke said the biggest selling point to sway owners to approve the Rams' move to Los Angeles instead of the Carson project proposed by the Chargers and Raiders was the allure of the development.

"I don't think we sold them," Kroenke said. "I think it was the excellence of the project itself. When we started, we said this project has to be that kind of project. Our biggest risk is to undershoot it."

Asked about the status of talks between the Rams and Chargers, Kroenke said those negotiations are ongoing but did not give an indication of how close the two sides were to coming to an agreement on a framework of a deal.

"That was part of the approval, and we're immediately engaged with them, talking about what some kind of deal might look like," Kroenke said. "We've offered several iterations of that. So we'll see where that goes."

A Rams fan shouted, "Stay in San Diego. We don't want them," coaxing a chuckle from Kroenke.

Kroenke said he has had a home in the Los Angeles area for more than 20 years.

A Southern California native who played at USC, Rams coach Jeff Fisher also is coming home. While Fisher looks forward to returning to his Los Angeles roots, he also acknowledged the loyal fans the Rams are leaving in St. Louis.

"We're leaving a great fan base," Fisher said. "We're leaving some people who are very, very disappointed. And I personally want to thank those people, the St. Louis Rams fans, who got to watch them win a Super Bowl.

"They supported us. Even during the tough times this year, they consistently came out. So we appreciate them. And we personally hope that they will continue, because once you're a Rams fan, you're always a Rams fan."