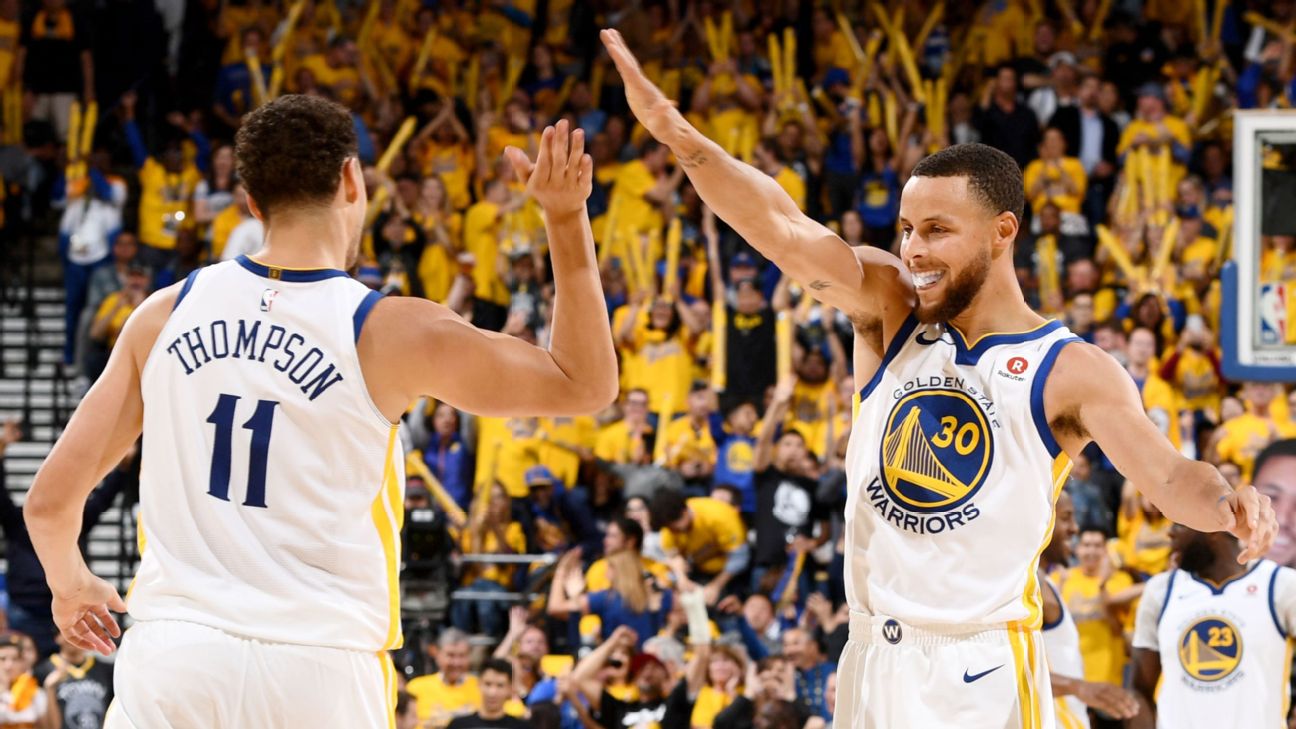 OAKLAND, Calif. -- The series the basketball world has been craving for months is finally a reality. The Golden State Warriors and Houston Rockets will face off in the Western Conference finals.

The Warriors took care of their part Tuesday night, knocking off the New Orleans Pelicans 113-104 in Game 5, clinching a 4-1 series victory in the conference semifinals. As usual, it was Stephen Curry and Kevin Durant leading the way, combining for 52 points, 13 rebounds and 15 assists. Draymond Green nearly had a triple-double, scoring 19 points, grabbing 14 rebounds and dishing out nine assists.

After a close first half, the Warriors shut the game down with a 25-4 run to start the third quarter, much like they did in a Game 4 win in New Orleans. The Warriors' dominance was on full display during this stretch as they outscored the Pelicans 36-19 in the quarter, and 12-0 on fast-break points.

The Warriors get a few days to rest before the big showdown against the Rockets, but they've got to like what they've seen on the defensive end in the last two games of this series. Steve Kerr's group offered a reminder to the rest of the league that when it is locked in at the defensive end it will be incredibly tough to beat. Most importantly, the Warriors have to love how Curry is responding after coming back from a sprained MCL injury in Game 2. The former MVP was 10-for-16 from the field and looked confident bouncing around the floor on Tuesday night.

For the Pelicans, the loss ends what will go down as one of the most successful seasons in franchise history. Anthony Davis finished out the season with a bang, registering 34 points and 19 rebounds, while Jrue Holiday had a triple-double with 27 points, 10 rebounds and 11 assists.

The Pelicans now must decide what they will do with unrestricted free agent DeMarcus Cousins this summer as he rehabs from an Achilles tendon injury and figure out if they want to bring back veteran point guard Rajon Rondo. The future is bright for a New Orleans group that registered a first-round series sweep over the Portland Trail Blazers and is buoyed by the reality that, at 25, Davis appears to be entering his prime.

The stage is now set for the Warriors to earn their fourth straight NBA Finals appearance. Curry, Durant, Green, Klay Thompson and Andre Iguodala are creating the kind of success that most players can only dream about. They get to chase history now each time they step onto the floor on the biggest stage in basketball. A series win over the Rockets would make them a heavy favorite to win their third NBA championship in four seasons.

Game 1 of the Western Conference finals is Monday.