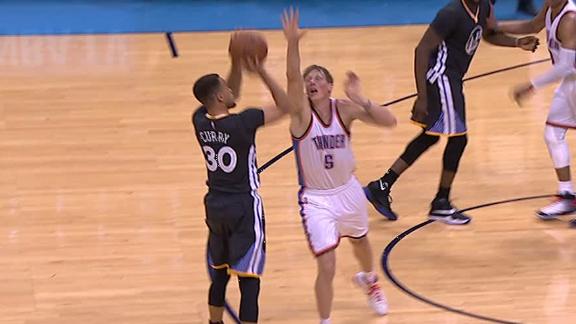 Golden State Warriors star Stephen Curry entered the record books twice on Saturday night, breaking the NBA single-season mark for 3-pointers and tying the mark for most 3-pointers in a game in a 121-118 overtime victory over the Oklahoma City Thunder.

Curry held the previous single-season record of 286, which he set last season, and now has the three highest single-season totals in NBA history.He has 288 3-pointers so far this season.

"I never would have thought at this point in the season I would be closing in on 300 and all that kind of stuff," he said. "That doesn't make sense to me. I've always tried to push the envelope and keep getting better, but a lot has to go right to get to this point."

Curry made 12 of his 16 3-point attempts against the Thunder, tying the mark for most 3s in a game held by Kobe Bryant and Donyell Marshall.

"It was a little nerve-racking," he said. "I wanted to make sure I was OK. I had to get it retaped. It was painful."

His final 3-pointer was especially dramatic, a 32-foot shot that broke a 118-118 tie with 0.6 seconds left in overtime to give Golden State the win.

Curry's incredible flurry had NBA stars, past and present, buzzing on social media.

Curry is shooting 50 percent (11-of-22) on shots from 30 feet and beyond this season, easily the best percentage of any player with at least five attempts. His 11 makes from that distance are the most this season; no other player has more than two, according to ESPN Stats & Info.

Curry also became the first player in NBA history to make at least 10 3-pointers in consecutive games. He made 10 of 15 attempts Thursday againstthe Orlando Magic.

The Warriors are 53-5 after the victory and one game ahead of theChicago Bulls' 1995-96 pace toward a record 72 wins.