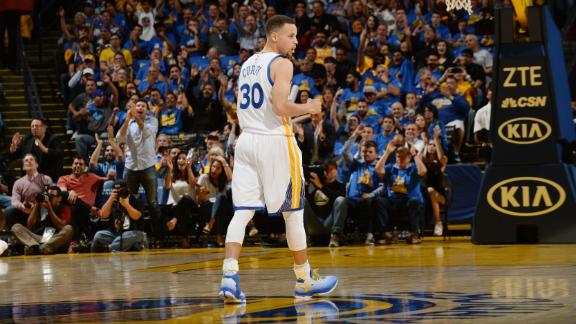 Curry made 10 3-pointers in a 125-104 winover the visitingMemphis Grizzlies, finishing the regular season with 402, a staggering number in that, before this season, no one had made as many as 300 3's in a year. Curry held the previous record for 3's in a season with 286, which he set last season.

Curry, who finished with 46 points, made six 3's in the first quarter and three straight during one jaw-dropping stretch that included a 31-footer well behind the top of the arc.

He had seven 3-pointers by halftime then hit No. 400 just 43 seconds into the third, draining a shot from the right corner before turning and saluting the roaring crowd.

"At a certain point, about eight minutes in the first quarter, I was able to toe the line a couple times, knock it down and things started to flow," Curry said. "I was searching for it at that point because I made a couple. Kind of let it come to me and then have some fun with it."

Curry reaches 400 3-pointers in style
Steph Curry marks his place in NBA history by knocking down 8 3-pointers to reach 400 on the season. He did it in spectacular fashion during the last game of the season against the Grizzlies.
Related topics:
sportsespn3 pointersstephen currygolden state warriors400record73nba
Copyright © 2020 ESPN Internet Ventures. All rights reserved.
More Videos
From CNN Newsource affiliates
TOP STORIES