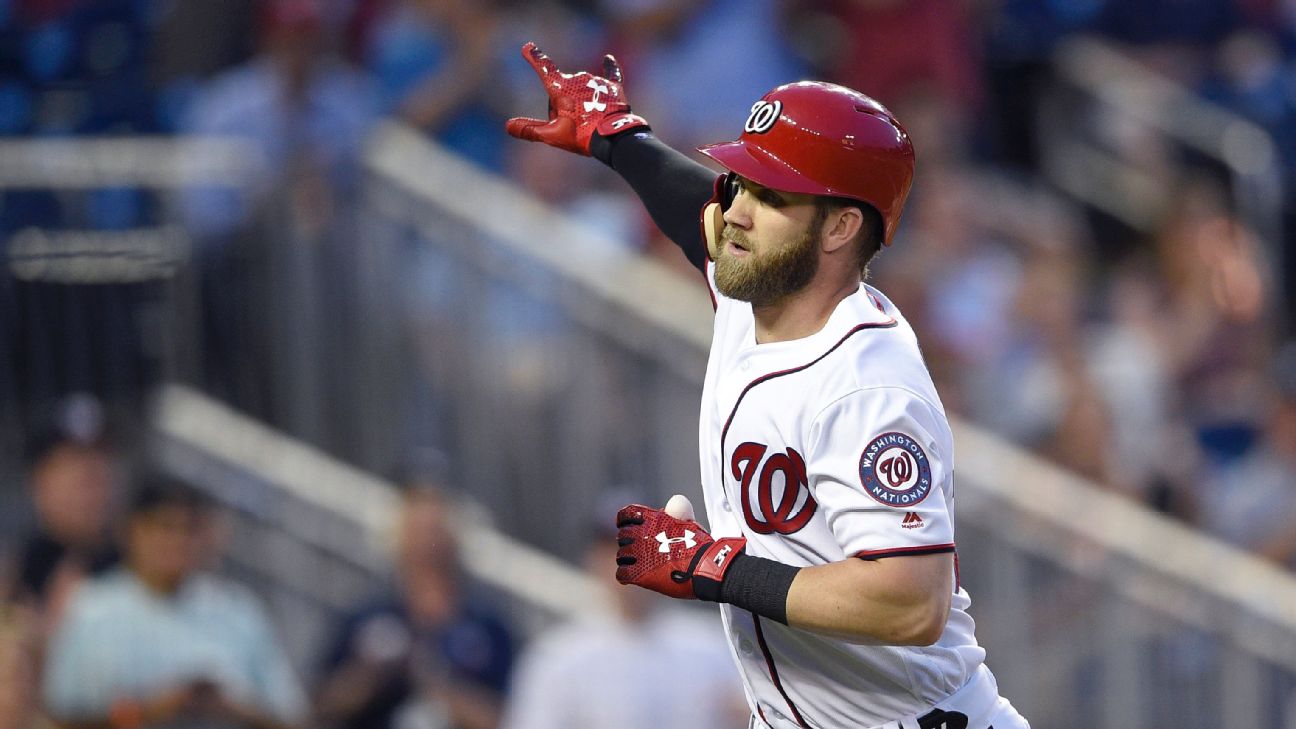 It's hard to believe, but we're a third of the way through the season, which means it's time for my annual still-too-early All-Star picks! (Think this is early? Well, we made our way-too-early picksin February!)

This is a fun exercise because I try to replicate the actual selection process and predict who will make the All-Star teams. Warning: The American League team is going to be a hot mess. As I went through a rough outline of starters and reserves, I came up with 29 automatic selections, not including a couple of other players I wanted to include. The problem: Five teams didn't have a representative, and there are only 32 roster spots. Square pegs, round holes.

The National League was a little easier, with fewer must-have guys, plus no DH to take up two roster spots. Let's start there, keeping in mind the All-Star roster rules:

2. Rosters include 20 position players and 12 pitchers

3. Each team must be represented

5. The players vote for the backups at each position, five starting pitchers and three relievers

6. The commissioner fills out the remaining slots

C --Buster Posey, Giants. He has started the past three All-Star Games, and though he isn't having the best season among NL catchers, I believe the fans will give him the nod once again.

1B --Freddie Freeman, Braves. This is usually a loaded position, but Paul Goldschmidt and Anthony Rizzo are off to terrible starts, Joey Votto's power numbers are down and Cody Bellinger hasn't produced like last season. It's Freeman or Brandon Belt, but I'll go with Freeman earning his first All-Star start.

2B -- Ozzie Albies, Braves. He leads the NL in extra-base hits, and the way he runs, he looks like a future star in his first full season.

3B -- Nolan Arenado, Rockies. Lots of options here, but Arenado won the fan vote last year, so let's go with him again.

SS -- Trea Turner, Nationals. He has been healthy and good, and he'll draw the start in front of the hometown fans.

OF -- Bryce Harper, Nationals. You can debate whether he deserves to start, but he'll get his fourth straight starting nod and fifth in six seasons.

OF --Charlie Blackmon, Rockies. He hasn't been putting up the dominant numbers he did in 2017 -- his Baseball-Reference WAR is just 0.1 -- but the fans voted for him last year.

OF --Odubel Herrera, Phillies. He deserves the start on merit and could be the first Phillies starter since Chase Utley in 2014.

My biggest concern with this starting eight is that it includes no Cubs, who should be helped in the voting by their fan base. But no Cubs started in 2017, so maybe that will happen again.

Cervelli and Realmuto both make it on merit, ranking in the top 20 in the NL in WAR. ... Belt is having a huge season, ranking third to Arenado and Freeman in wOBA and first in the park-adjusted RC+. ... Gennett is proving that 2017 wasn't a fluke and is up to .347/.381/.559. ... Baez was my final selection to the roster thanks to his power and defense. Cesar Hernandez or a fourth outfielder would be a possibility as well. ... I have three backup third basemen, but all three deserve to go, and I can start Bryant at DH. Shaw is top-10 in WAR on both FanGraphs and Baseball-Reference, and Suarez has monster numbers despite missing time, with 41 RBIs in 38 games.

The outfield was a little tougher. At 34, Markakis is having a career season and could be heading to his first All-Star Game. ... I love the all-around play that Cain and Pham offer. Cain has suddenly decided to walk more than ever, boosting his walk rate from 8.4 percent last year (which was a career high) to 14.9 percent. Plus, we know about his defense, which is still excellent at age 32. ... Pham had a breakout 2017 and is following with an All-Star-level campaign. ... Kyle Schwarber and Starling Marte are possibilities here, and A.J. Pollock looked like a lock before his injury.

SP --Jake Arrieta, Phillies. The veteran gets the edge in a tight race with Cardinals rookieMiles Mikolas.

The first five starting pitchers were pretty easy selections, and as good as deGrom has been, I have to give the start to Scherzer in his home park. ... For the final two starters, you could pick from half a dozen candidates. I originally went with Strasburg and Noah Syndergaard, going with the idea that they're legitimate starts as opposed to somebody having a good three-month run. ... But Syndergaard just landed on the DL, which takes him out of contention (for now). ... Same issue with Clayton Kershaw, who has made seven starts but currently resides on the DL. ... In the bullpen, I went with Hader, Doolittle and Ottavino as the automatic selections, though there's no guarantee the players will vote in a setup guy such as Ottavino ahead of a closer such as teammate Wade Davis, who leads the NL in saves. ... Jansen and Hand fill out the roster, giving us reps from the Dodgers and Padres, though they're certainly more than token All-Stars and Jansen has turned things around after a bad April.

C --Gary Sanchez, Yankees. The fans have voted Salvador Perez the starter the past four All-Star Games, but I think Sanchez beats him this year, even though he hasn't been tearing it up at the plate.

1B -- Mitch Moreland, Red Sox. First base in the AL has been a complete and utter disaster. Moreland and Jose Abreu are the only two having good seasons, and Moreland wasn't a full-time starter until Hanley Ramirez was designated for assignment. I have no idea who starts; maybe Miguel Cabrera or Albert Pujolswill win on a legacy vote or something, but I'll predict Red Sox fans win.

2B --Jose Altuve, Astros. The power is down from the past couple of seasons, but that recent 10-for-10 streak boosted his average well above .300.

3B -- Jose Ramirez, Indians. This has been a loaded position the past few seasons, but Ramirez is the easy call this year.

SS -- Carlos Correa, Astros. Oh, boy. Correa isn't putting up the numbers of Manny Machado or Francisco Lindor, and he doesn't play defense like Andrelton Simmons, but I think that World Series momentum and a larger fan base than that of the O's or Indians will win him the starting nod.

DH -- J.D. Martinez, Red Sox. Martinez should win the vote, but if Shohei Ohtani is included here on the ballot, it could make things interesting.

This is where things can get crazy and weird. Ramos makes it on the strength of a .310/.352/.465 line, but it's possible the players vote in Perez, which would leave us needing a Rays player. ... Abreu is the clear backup at first base if he doesn't start. ... Lowrie has had a strange career, with seasons when he hit and some when he didn't, plus injuries and times when he was a utility guy. But he has been raking all season, and other candidates are suspended (Robinson Cano), are off to slow starts (Brian Dozier), are injured (Jonathan Schoop) or spent April in Triple-A (Gleyber Torres). ... Matt Chapman is my personal favorite at third, but I'll predict Moustakas here with Josh Donaldson struggling a bit, Adrian Beltre missing time andAlex Bregman solid but not great. However, if Moustakas and Perez both get shut out, the Royals don't have a rep (probably reliever Kelvin Herrera).

OK, shortstop. I found room for Machado and Lindor, but no matter how I manipulated the roster, I couldn't find room for the very deserving Simmons, who has become a threat at the plate to go with his spectacular defense. .... Springer, Haniger and Benintendi seem the pretty clear backups in the outfield, though you can make arguments for Justin Upton, Kevin Pillar andEddie Rosario. ... Mazara makes it as my Rangers rep, and Stanton gets the nod as the second DH.

The first five starting pitchers need no explanation. Four of them were the top four in the Cy Young voting last year, and Cole has come over to the AL and dominated. ... Verlander gets the nod as the starting pitcher. ... Happ, Berrios and Boyd make it as the reps for their teams. They're all having solid seasons, so they aren't terrible choices, but that means leaving off Charlie Morton,Trevor Bauer and James Paxton. ... If Ramos doesn't make it at catcher, Blake Snell (6-3, 2.78 ERA) is the best bet to represent the Rays. ... I have only the mandatory three relievers. Herrera is a possibility to get voted in, as is Craig Kimbrel, based on his past history (though he has allowed five home runs). ... Finally, my last choice was Ohtani. How can we not have him on the team? Well, imagine the above scenario if we have to fit Snell here. That could bump Ohtani from the team. (Of course, there are always at least a couple starters who pitch on Sunday and thus have to be replaced, so there's a good chance we see some of the jilted players. But you have to find room for Ohtani, somehow, some way.)
Report a correction or typo
Related topics:
sportsespnatlanta bravesall star rostersminnesota twinsall star votingarizona diamondbacksnew york yankeesnew york metsphiladelphia phillieswashington nationalsall star ballotssan diego padresall star teamstexas rangersboston red soxcincinnati redsoakland athleticstampa bay raysamerican all starssan francisco giantsmlb all starscolorado rockieslos angeles dodgersdetroit tigersmilwaukee brewersall star game in washingtoncleveland indianschicago white soxmlbwill ohtani make all star teamkansas city royalsst louis cardinalshouston astrosbaseball all starsbaseball all star gamenational all starspittsburgh piratestoronto blue jaysmidsummer classicseattle marinersmiami marlinslos angeles angelsbaltimore oriolesmlb all star gamechicago cubsdc
Copyright © 2021 ESPN Internet Ventures. All rights reserved.
More Videos
From CNN Newsource affiliates
TOP STORIES