Sunday's Celtics-Lakers battle had everything the NBA's premier rivalry needs 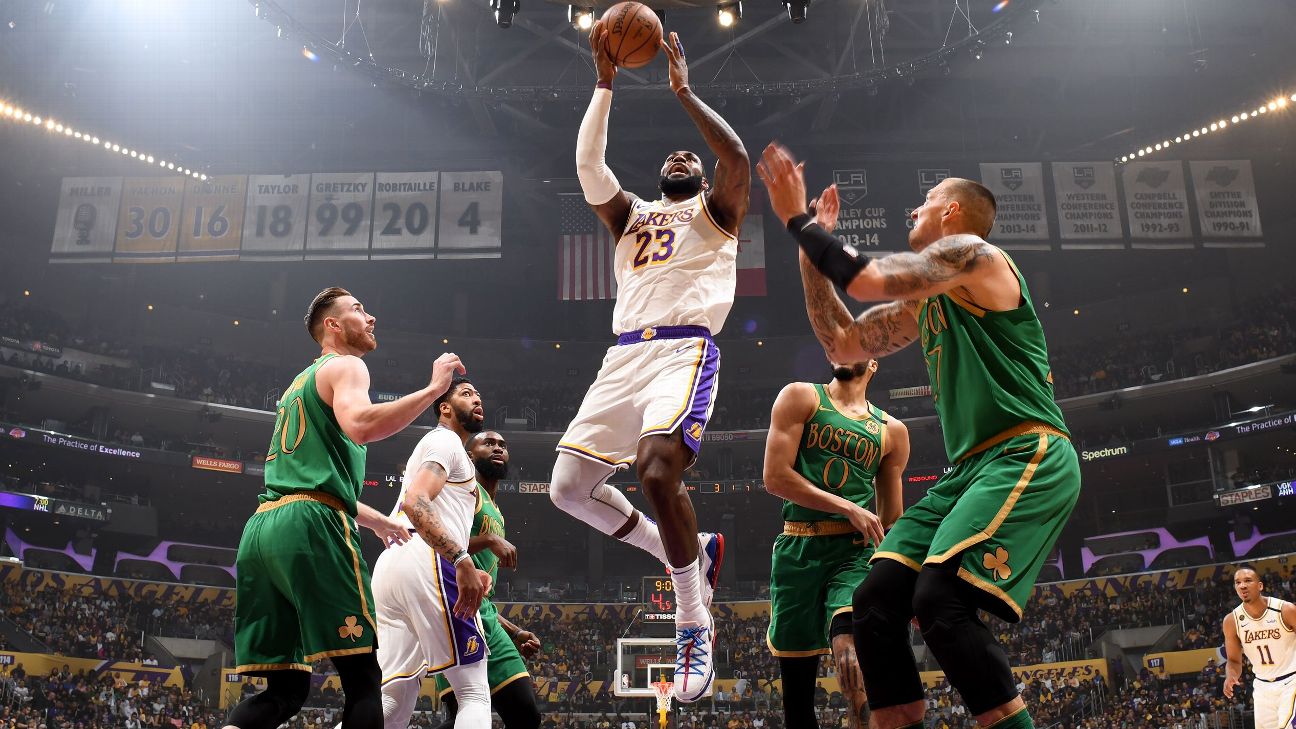 LOS ANGELES -- Two tentpole franchises that were languishing in a cultural malaise just one year ago waged intense basketball warfare on Sunday afternoon at Staples Center, with the Los Angeles Lakers eking out a 114-112 winover the Boston Celtics. LeBron James drained the decisive field goal, a high-arcing fallaway jumper with 30 seconds remaining.

The game was a testament to brand power in the NBA and, more specifically, the power of those big brands to reinvent themselves in a league in which balancing stardom and culture can be a tricky exercise. Even with 33 championships between them, neither the Celtics nor the Lakers are immune to static, and both endured their share last season.

Eleven months ago, the Lakers were a franchise in disarray, a teetering empire on the brink of collapse, relevant only for their folly. Half of their roster was being dangled in the pursuit of Anthony Davis as they played out their sixth consecutive season without a playoff appearance. In subsequent weeks, then-Lakers president Magic Johnsonresigned in a bizarre and impromptu hallway news conference, and the front office stumbled its way through a sloppy and public coaching search.

Although the Celtics were playoff-bound last winter, they were a far cry from the scrappy, feel-good squad that came within a game of reaching the 2018 NBA Finals. The collective grit of the roster and the sangfroid of coach Brad Stevens were no match for a fractured locker room, in whichKyrie Irving spoke openly about the challenges of leading. Although the Celtics won 12 more games than the Lakers and qualified for the postseason last season, Boston's demise in the second round might have been more dispiriting given the lofty expectations.

No gloomy remnants were present at Sunday's showdown, which was a proper reclamation of the NBA's premier rivalry after a decade's hiatus (the Celtics' January blowout win in Boston was but a tease). Afterward, James spoke about the mutual respect of the two storied franchises, noting the presence of Bill Russell wearing Kobe Bryant's No. 24 jersey at Sunday's contest. Entering Sunday, the Celtics and Lakers were deadlocked 101-101 in their previous 202 meetings, separated by a total of 55 points.

Absent intrasquad drama, speculation about player movement and chatter about faulty chemistry, the most recent meeting of the Celtics and Lakers was -- mercifully -- all about the basketball:

James drained the game winner, and 21-year-old All-Star Jayson Tatum dropped 41 points. Davis -- though he turned the ball over at an unusual rate -- pounded the Celtics inside, andJaylen Brown displayed his versatility and physical gifts. The respective defenses exhibited their best selves for stretches, and a couple of iffy calls heightened the tension.

The Lakers came to compete, as they have all season. Although this might seem like an obvious strategy for a team with championship aspirations playing a nationally televised game, it has been years since a LeBron James-led squad embraced the notion of maximum effort for the regular-season slog.

Whether it is James wanting to give Davis a taste of life as part of an elite team or the restorative effects of his seven-month virtual sabbatical as he missed the 2019 postseason or the reality that the end of his career is in sight, this James team has worked at maximum capacity since October, with the results to match.

The Celtics, even in defeat and in the absence of Kemba Walker, were a pleasure to watch. This is a team intoxicated by the joy of witnessing, in real time, dynamic, young talents evolve into the players they're projected to be. Tatum, who grew up dominating with his skill, is learning how to add strength to his game. Brown, who grew up dominating the game physically, is incorporating more skill.

It's a symbiosis that is flourishing in the company of a point guard in Walker, who genuinely roots for his young players, and teammates and coaching staff who have reestablished a collective trust.

Before the season, a member of the Celtics' staff told Tatum that he had the ball, on average, two minutes per game in 2018-19. The challenge for Tatum going forward would be to figure out how to impact the game in the 30 or so minutes he wasn't in possession. By every metric and observation, Tatum has responded. Only James, Giannis Antetokounmpo, Kawhi Leonard and James Harden best him in real plus-minus. Tatum's 103.2 defensive rating puts him first among the Celtics' starters.

Sunday's outing was another demonstration of Tatum's evolution: efficiency (12-for-20 field goals, 13-for-15 from the line) without a shot attempt between 8 and 24 feet, all against an onslaught of double-teams. Rather than having to bump defenders in traffic for space from midrange, he is deftly sidestepping them from beyond the arc. His two minutes of possession is now up above three minutes on the season, largely because he has developed his pick-and-roll game. (Tatum's 24 direct picks led to a cool 33 points on Sunday.)

"He was special all night," James said of Tatum.

Both the Celtics and Lakers rank top-five in defense, with both deploying length and attention to cover ground quickly. Both switch readily but are selective, able to scram out of matchups if need be. Both understand help positioning, and both know how and when to rotate when there's a fire alarm. The Lakers held the Celtics to a shot quality of less than 50% on Sunday, and Boston held the Lakers to a modest true shooting percentage of 55.7.

The Celtics are an intriguing team in the Eastern Conference's postseason race, but the Lakers are the favorites in the West, a condition born out of a single outcome. As the ashes smoldered on their disastrous seasons, the Lakers and Celtics identified a common solution: Anthony Davis.

For Boston, it was a short-lived vision. When the Lakers scored the No. 4 overall pick in the 2019 draft in the May lottery, the Celtics knew the Lakers had both Davis' preference and the component part to craft a deal to theNew Orleans Pelicans' liking. In a flash, good fortune rained down on the Lakers' seasons-long drought, with Davis and a retooled roster of competent vets. For the past four months, the Lakers have cashed in on that fortune.

The Celtics turned to a less seismic plan: Replace Irving with Walker and empower Tatum and Brown -- as well as Gordon Hayward, who is still regaining his footing after major injury. By exchanging a volatile personality for a stable one and turbocharging Brown's and Tatum's improvement phases, the Celtics have reaped benefits.

The NBA learned last season that team culture is far more precarious than those who subscribe to its primacy would like to believe. The Celtics believed that their superior culture could absorb any talent, but culture can be subsumed by ego, distrust or plain frustration. The Lakers believed that James could import a championship culture that could elevate their young talent, but culture can't be injected into young players like a vaccine.

Culture is beneficial, but fit is essential. The Lakers and Celtics have component parts that fit -- complementary talent, compatible personalities, roles that are defined. That fit has facilitated winning, and the culture gets built around that.

If 2018-19 was about the failure of reverse engineering that sequence in the NBA, then the Lakers and Celtics of 2020 have restored order. 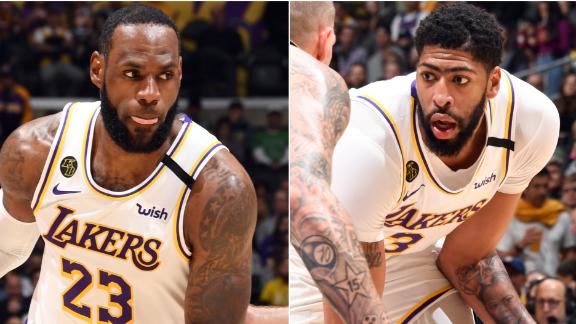 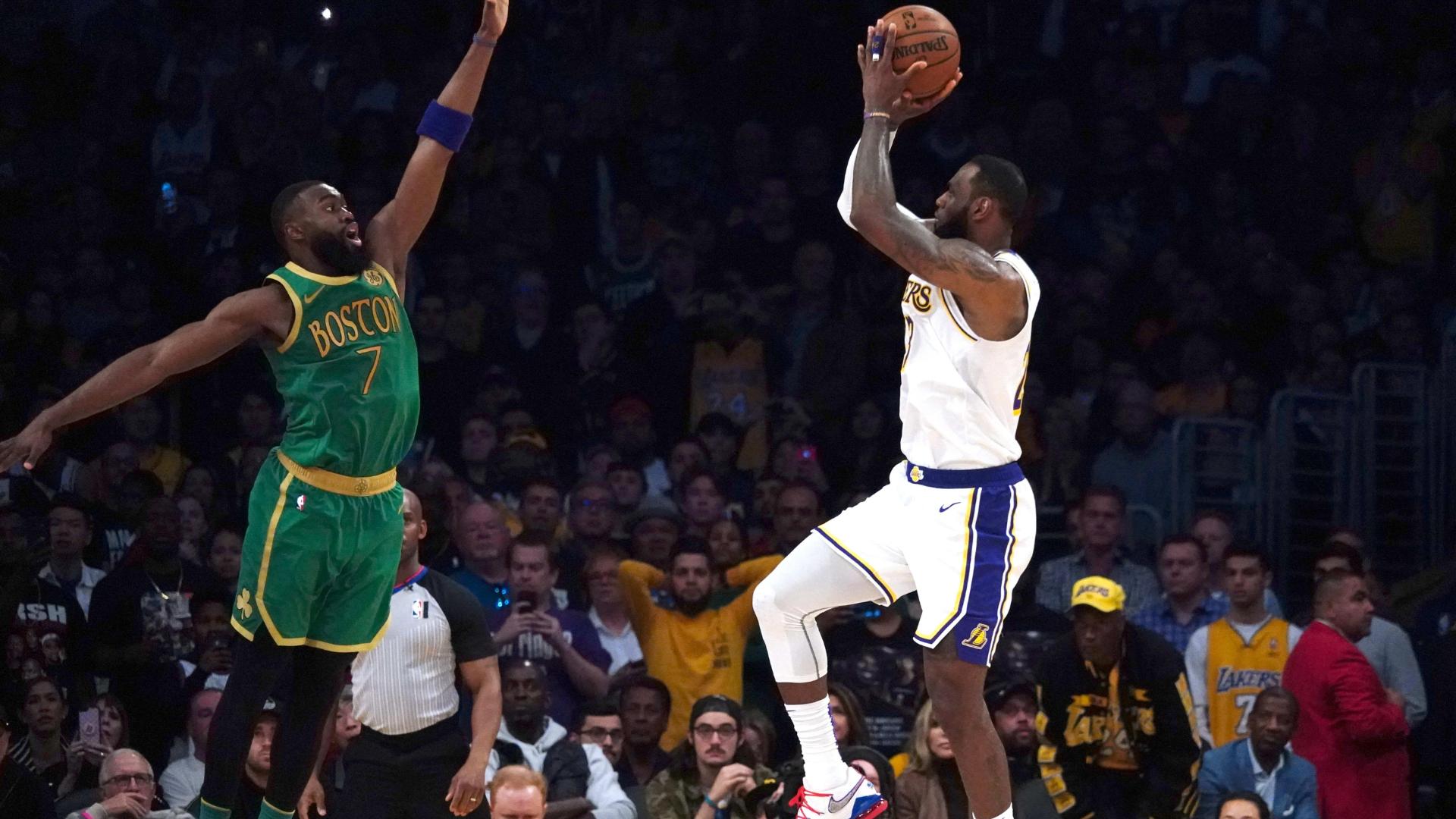