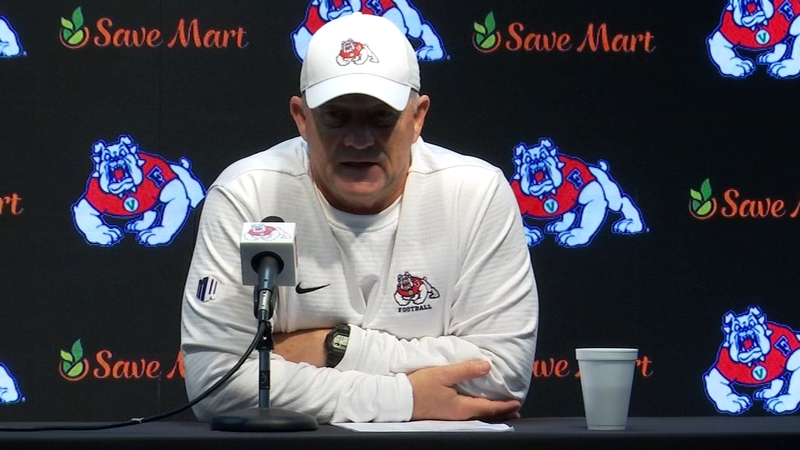 FRESNO, Calif. (KFSN) -- Fresno State is back in the win column and back to 500 on the year after putting up 56 points on UNLV Friday night.

But as Coach Tedford said Monday, it's time to focus on what's next.

In just five days, Bulldog Stadium will be packed with people for homecoming. Fresno State welcomes Colorado State, and it's the first meeting between the two teams since 2016.

It's also the first time Tedford takes on the Rams at the helm. He knows Colorado's program is physical.

"It was evident back in the day when we played, and when I was here before, played them a time or two at Cal. There always very physical, coach bobo's offense is very balanced," the head coach said in a press conference.

Colorado State snapped their four game losing streak last weekend at New Mexico. Despite their 2-5 start to the season their weapons on offense are the best in the conference.

Wideout Warren Jackson is the top receiver wracking up 214 yards and two touchdowns against the Lobos. Senior Marvin Kinsey Jr. is the top running back rushing for over 700 yards and six touchdowns this year.

Fresno State's strong showing on defense against UNLV will give the team confidence to slow their offense down. Linebacker Justin Rice was tabbed the Mountain West defensive player of the week.

'It's always nice when any of your teammates get recognition, but that's in the rear view mirror now. It's more about what we're doing going forward and what type of practice we have going forward," Tedford said.

A match-up working in the Dogs' favor, the Rams rank 128th in the FBS in turnovers lost.

Fresno State now ranks 7th in turnovers gained after five takeaways against the Rebels. So fans should be in for a treat on homecoming.

"It's a special time for the alumni and people coming but the football team is more locked in to what's going on in this building and on the football field," Tedford said.