The conclusions that matter from Lakers-Bucks blockbuster 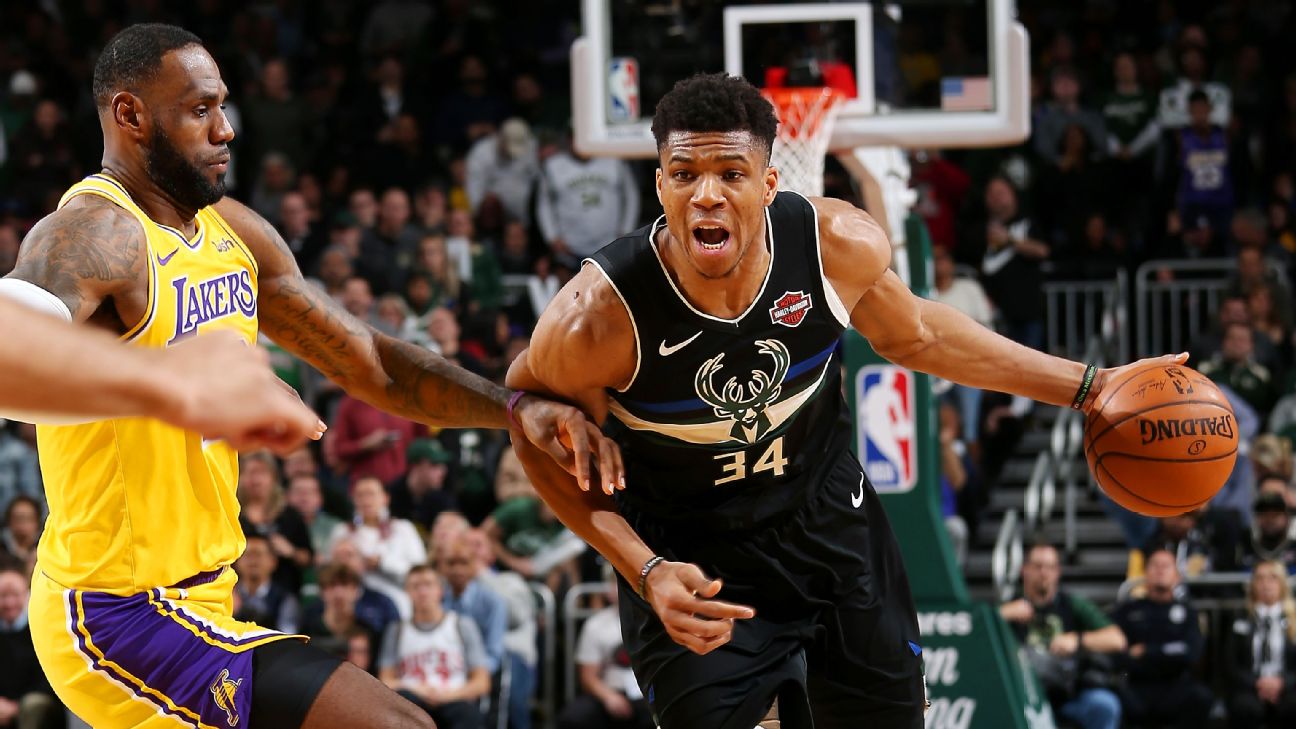 The wink said it all.

When Giannis Antetokounmpo drilled his career-high fifth 3-pointer Thursday night, it was understandable that he had to give the crowd a little something extra as he retreated back on defense.

As if the home team hadn't already given its fans enough in the most anticipated game of the season so far.

Antetokounmpo and theMilwaukee Bucksput on a master class in defensive dominance and offensive excellence, and the sold-out Fiserv Forum crowd ate it up during a 111-104 victoryover theLos Angeles Lakers. On Thursday night, Milwaukee appeared to be a varsity squad devouring an awkward, uncoordinated JV team -- except that junior team was home to LeBron James and Anthony Davis, two of the most talented basketball players in the world.

The teams entered the game with 24-4 records, tied for best in the league. Both were coming off losses --the Bucks lost to the Luka Doncic-lessDallas Maverickson Monday, and the Lakers lost to the Victor Oladipo-lessIndiana Pacerson Tuesday. Each teams' stars -- James and Antetokounmpo -- had vowed that their goal was not to drop two games in a row.

The crowd buzzed -- always excited, but only reaching an ear-splitting pitch when Antetokounmpo thundered down a dunk or made a 3. A sprinkling of Lakers faithful dressed in yellow broke up an otherwise sea of Milwaukee fans in forest green Bucks jerseys, hats and sweatshirts. When the Lakers scored, there were enough Los Angeles supporters to make the arena hum slightly.

But this was Milwaukee's night.

The beginning of the second quarter was silly. After a slow start, Milwaukee found its footing and went on a 6-0 run to start. Lakers coach Frank Vogel quickly called a timeout in an attempt to squash any momentum the Bucks were building. From there, the game began to teeter on absurdity. Milwaukee erupted, extending its run to 20-7.

In the end, Milwaukee would come out on top, catapulting itself to the NBA's best record at 25-4. At least for now.

Giannis shows off the range

Antetokounmpo has made a name for himself as a complete, improbable, cross-the-court-from-end-to-end-in-three-steps-and-dunk-on-you type of player. He is uniquely nimble for his 7-foot frame and can handle the ball like a guard.

Antetokounmpo's 3-point shooting, however, has been historically spotty. In the past, opposing teams have purposely tried to run him out to the 3-point line in hopes that would slow down his offensive production.

So when he drilled his fifth 3-pointer on Thursday, Antetokounmpo threw the crowd a wink and appeared to put an imaginary crown atop his head.

The days of sagging off Antetokounmpo might be over. According to Second Spectrum data, the leading MVP candidate is making 45% of his 3-pointers in December when the closest defender is at least six feet away. That is up from 33% in November and 17% in October.

Rajon Rondo stood in the right corner early in the third quarter. There was plenty of space between him and the closest defender when he received a pass from James. Rather than launch the open shot, Rondo put the ball on the floor, driving into traffic along the baseline. When the Bucks' defense cut him off, Rondo was unable to muster an attempt before the shot clock expired, ultimately costing L.A. a turnover.

It was a moment that encapsulated the night for Rondo and the Lakers' bench. L.A. reserves, missing Kyle Kuzma for the fifth straight game as he rests a sprained left ankle, were nowhere to be seen in Milwaukee. For a team that has touted its depth this season, Thursday's dearth of production from the second unit was particularly disheartening. The Bucks' bench outscored the Lakers' bench 34-4, with the L.A. reserves going just 2-for-9 from the field (0-for-4 from 3) with 10 turnovers (five belonging to Rondo). The Lakers' starters were offered precious little relief on the final night of a five-game trip, with Davis and James forced to play a combined 80 minutes.

With Eric Bledsoe (right leg injury) sidelined for the third consecutive game, the Bucks were looking for a spark. Donte DiVincenzo has rightfully earned the starting nod, without Bledsoe, but George Hill was automatic off the bench. The veteran point guard put up 10 of his 21 points and a pair of treys in an opening quarter in which Milwaukee used 11 different players.

Hill's 10 first-quarter points led the team, marking the first time Antetokounmpo wasn't the Bucks' scoring leader after 12 minutes of a game when he was active since the Dec. 6 blowout win against the LA Clippers.

The Bucks won't need Hill to produce at this high level of scoring on a nightly basis, even with Bledsoe out, but he has the potential to be one of their most consistent bench contributors during the playoffs. Hill and Kyle Korver are the only players on the Bucks' roster who have played in the NBA Finals.

Missing Bledsoe isn't necessarily a good thing, but it has given the Bucks a chance to develop increased trust in their bench options. DiVincenzo, Hill, Korver, Pat Connaughtonand Ersan Ilyasova have all fulfilled key bench roles. All-Star swingman Khris Middleton also missed seven games in November because of a left thigh bruise. The Bucks prevailed in those tilts as part of an 18-game win streak, and the experience the reserve players earned with increased roles will be invaluable as the season progresses.

"With Khris going out at the start, I got all the starting jitters out so when [Bledsoe] went down; it's kind of easy to step into that role, and I know what I need to do," DiVincenzo said Thursday at shootaround.

The new-look, big, physical Lakers played well on defense; they held Milwaukee to just 34 points in the paint (the Bucks average 52.8). Antetokounmpo, who leads the league by averaging 18.9 points in the paint, had only 10 in that key area. Normally, that would spell trouble for the Bucks, but they won the 3-point battle thanks in large part to a career-best performance for long-range shooting from their MVP.

The Bucks also looked good on defense. Wesley Matthews drew the James assignment, and Matthews did well. The Lakers scored only 36 points on the 46 possessions when Matthews guarded James.

But here's my second takeaway. Do the Lakers have enough?

Led by Hill, who scored 21 points on only 12 shots, the Bucks' bench torched the Lakers' reserves. And if Thursday's contest raised any real questions about either team, it's this: Are the Lakers deep enough to win it all? 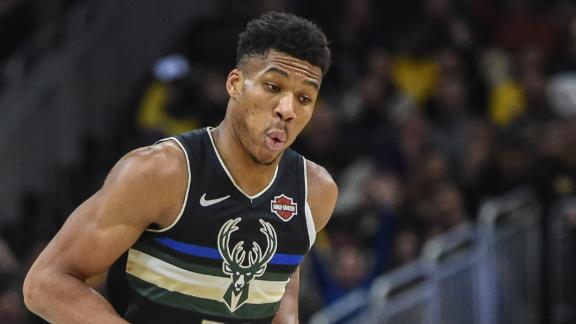 Giannis drops 34 to help Bucks hold off Lakers
Giannis Antetokounmpo drops 34 points, including five 3-pointers, and picks up 11 rebounds as the Bucks hold off the Lakers for a 111-104 win. 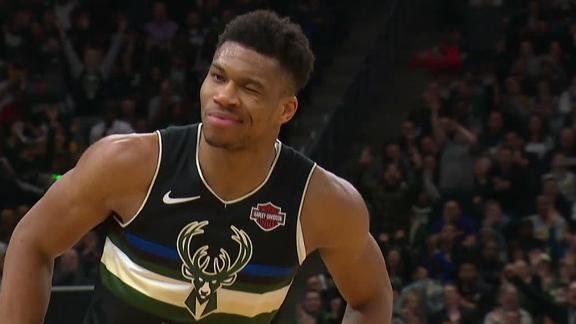 Giannis winks after sinking 3-pointer
Giannis Antetokounmpo dribbles up to the 3-point line, knocks down the long range shot and turns to wink at the crowd. 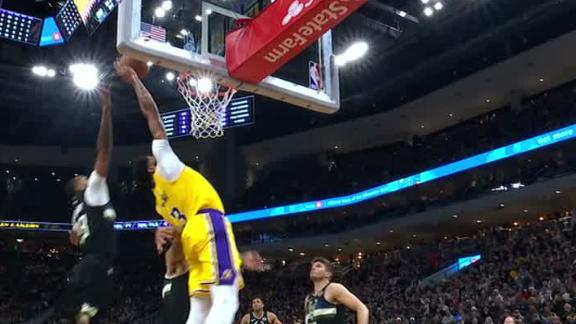 AD tips in Rondo's alley-oop pass
Rajon Rondo lobs a pass up from the 3-point line and Anthony Davis tips it in off the glass while hanging in midair. 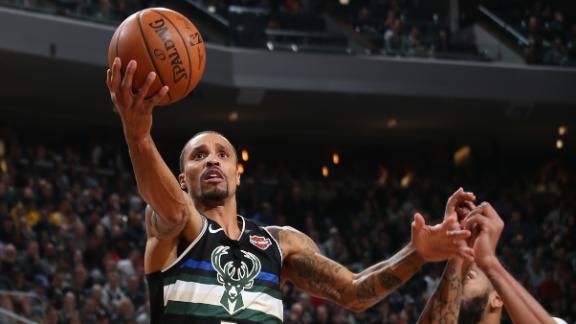