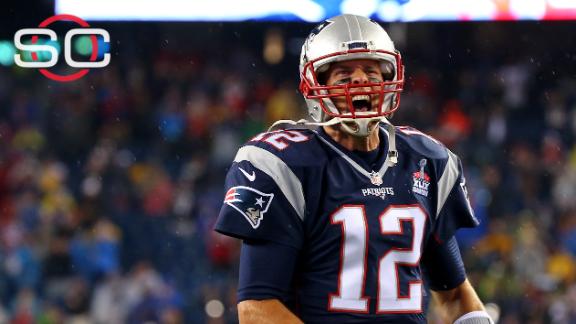 FOXBOROUGH, Mass. --New England Patriots quarterback Tom Brady took the field for warm-ups and received a rousing cheer from the rain-soaked crowd at Gillette Stadium before Thursday night's28-21 win over the Pittsburgh Steelersin the season opener.

As is the norm, Brady jogged from one end of the field to the other and forcefully pumped his right fist multiple times in the direction of fans seated in the end zone. Jay Z's "Public Service Announcement," one of Brady's favorite songs, played as he took the field.When the team took the field, fireworks shot in the air, and the crowd went wild.

Once the game started, Pats fans had plenty more reason to cheer Brady, as he picked apart the Steelers defense while going 25-of-32 for 288 yards and four touchdowns.

"It was a pretty special night," Brady said. "I was excited. Our whole team was excited. We haven't had one of these nights in a long time.

"The regulars around here always see me pretty excited, especially running out there in pregame," he said. "Coach says you have one week, and you put everything you can into that one, three-hour performance. Just a big buildup."

Brady's status for the season opener was in question until Judge Richard M. Berman vacated Brady's four-game NFL suspension Sept. 4. The league has appealed the ruling.

The Patriots unveiled their Super Bowl banner in a pregame celebration that included a live performance from the Dropkick Murphys, who played "The Boys Are Back" and "I'm Shipping Up To Boston." Also, singer/songwriter/producer T-Pain was joined by the Springfield Symphony Orchestra for a performance of "All I Do Is Win."

Patriots Hall of Famers Troy Brown, Willie McGinest and Ty Law each carried a Lombardi Trophy to a stage at midfield, and when owner Robert Kraft arrived with the most recent Lombardi, the crowd erupted. Had Brady not played Thursday, the Patriots planned to unveil in his honor a banner that highlighted his four Super Bowl titles and three Super Bowl MVP awards.

Although it rained heavily at times before the game, it subsided by the time the ceremony began.

On the opening drive, Brady put his hands on his helmet in frustration after he missed receiver Danny Amendola, who was open on second-and-10. The Pats punted on that drive.

The fans renewed their "Brad-y" chantswhen Brady successfully snuck for a first down late in the second quarter. Two touchdown passes to Rob Gronkowski -- a 16-yard pass and a 6-yard score -- gave the Pats a 14-0 lead. Gronkowski caught a third touchdown in the fourth quarter.

Not long after that, with the Patriots leading 28-14, fans were heard chanting, "Where is Roger?" in a shot at NFL commissioner Roger Goodell for the botched Deflategate investigation.

Goodell had said he would skip the NFL opener for the first time as commissioner to avoid being a distraction. Instead, Goodell is planning to see the Bears and Packers on Sunday in Chicago, which left the New England fans to mock him in absentia.

Brady: 'It was a pretty special night'
Tom Brady comments on his team's victory over the Steelers and getting ready for the Buffalo Bills. 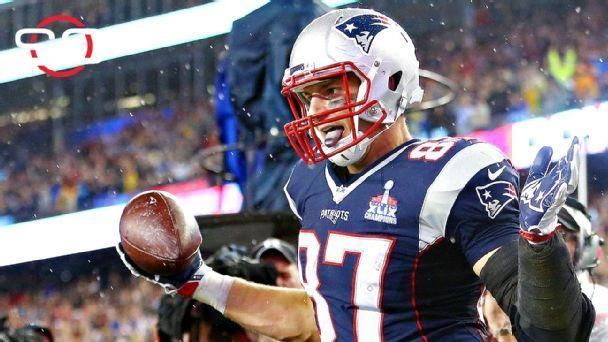 Brady, Patriots earn victory in NFL season opener
SportsCenter Highlight of the Night: Tom Brady connects with Rob Gronkowski for three touchdowns in the Patriots' 28-21 victory over the Steelers.