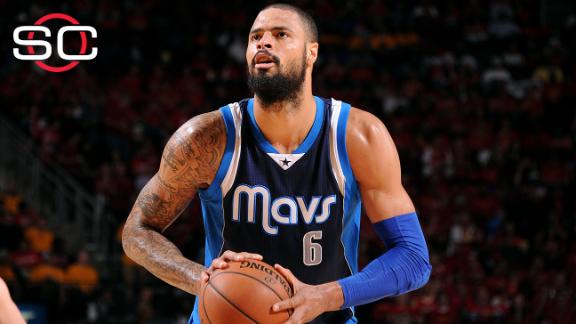 The Phoenix Suns have reached terms on a contract with veteran center Tyson Chandler on a four-year deal worth $52 million, according to league sources.

Sources told ESPN.com that Phoenix has committed all of its available salary-cap space to sign Chandler away from the Dallas Mavericks and pair him with guards Brandon Knight and Eric Bledsoe as the Suns' new cornerstones.

The Suns also reached terms Wednesday on a five-year, $70 million deal to re-sign Knight. The contracts with Chandler and Knight can't be officially signed until July 9, when a leaguewide moratorium on roster business is lifted.

Yahoo! Sports reported Wednesday that the Suns came to terms with Chandler quickly enough to be able to bring him into their scheduled afternoon recruiting meeting with Portland Trail Blazers free agent LaMarcus Aldridge, who is in the midst of meeting with seven different teams as he plots his expected departure from the Pacific Northwest.

Chandler's departure heaps the pressure on the Mavericks and the Los Angeles Clippers in their battle for the services of fellow free-agent center DeAndre Jordan. The team that misses out on Jordan will now no longer be able to turn to Chandler as a fallback, as both had been hoping.

Chandler wound up playing just two seasons in total in Dallas. He helped the Mavericks to the only championship in franchise history in 2010-11, wound up joining the New York Knicks in free agency before the 2011-12 season which was shortened by a lockout and then was reacquired by Dallas in June 2014 in the first big trade of the Phil Jackson regime in New York.