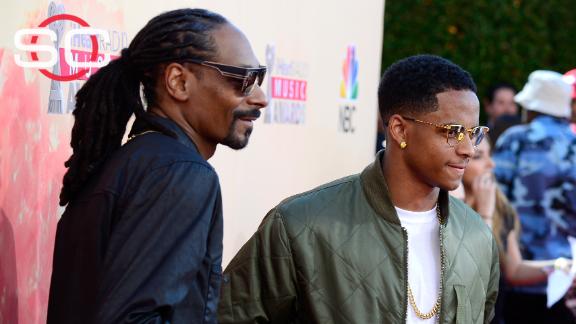 UCLA freshman Cordell Broadus, the son of rapper Snoop Dogg, has elected to give up football.

Broadus, a four-star wide receiver recruit out of Bishop Gorman High School in Las Vegas, had offers from several other national powers, including Florida State and Notre Dame, but he never reported to the Bruins' preseason camp.

"Cordell informed me yesterday that he has decided to pursue other passions in his life -- in particular his love of film through his company Film School Productions," UCLA coach Jim Mora said Friday in a statement released by the school. "Cordell is an amazing young man with many talents, and we wish him nothing but the best as he continues to pursue his degree at UCLA."

The news of Broadus' decision was initially reported by Bruin Report Online. Mora had previously indicated that "a personal matter" was the reason for Broadus' absence from camp, according to InsideSoCal.com.

Broadus picked UCLA over USC, his famous father's favorite college team. He and his father were part of an ESPN documentary that chronicled his recruitment.

Meanwhile, UCLA appears to be faring better with the son of another hip-hop artist. In June, Sean "Diddy" Combs, father of Bruins reserve cornerback Justin Combs, was arrested for allegedly attacking strength coach Sal Alosi with a kettlebell.Diddy was reportedly unhappy with his son's treatment.

The case is still being reviewed, but it seems fences have been partially mended with the Combs family and UCLA, as Justin Combs is practicing with the Bruins in San Bernardino, Calif., and Diddy posted a photo of his son with a "GO BRUINS!!!!!!!!!!!!!!" message on Instagram: