Untold Mike Trout stories from those who know him best 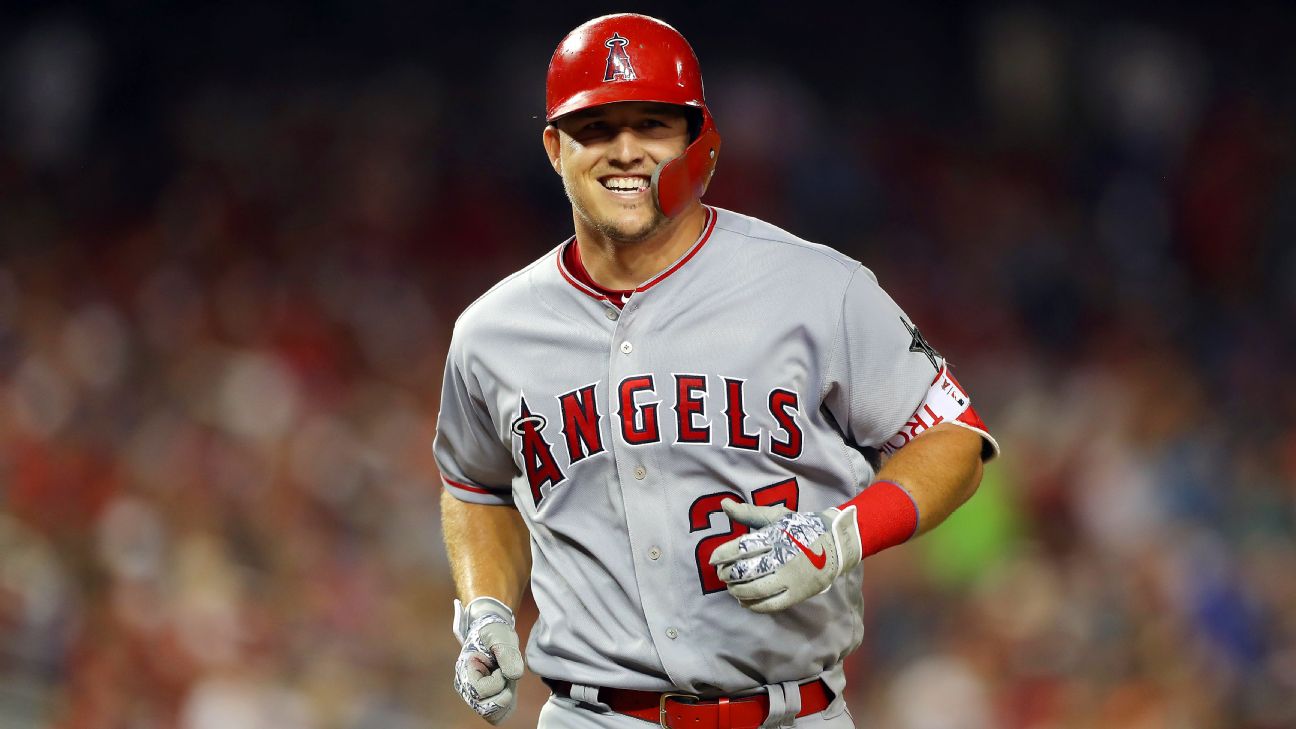 As E:60 prepared its profile of Mike Trout--now available to stream on the ESPN app or desktop --there were many, many great stories and anecdotes that we didn't have time to include or fully explore in the TV piece. Here are a few of those.

Garrett Richards and Mike Trout played together in the minor leagues, and Richards recalled that one year, a clubhouse attendant responsible for the laundry asked aloud who the heck was stuffing his pocket full of grass, because of the resulting mess.

"Well, Mike's got a pocket full of grass," Richards said. "So that was kind of when I began to notice his little quirks."

There is a backstory to Trout's daily collection of dirt and grass. When his dad, Jeff Trout, played in the minor leagues and was courting Debbie Busonick -- his wife-to-be and Mike's mom -- he "would go to a bunch of stadiums and pick up dirt and tell my mom that one day he'll be able to give her the world," said Mike.

"And I think it went from that, and yeah, I think some days it's grass, some days it's just like pieces of trash or bubblegum wrappers. I don't know, it's weird. Whatever's working for me that day. I kind of ride with it, and it came from that. The guys know in the clubhouse that I do it, and you know, they mess with me. I've been doing since I came up."

Torii Hunter referred to Mike Trout as "The Digger" because of how he creates divots when he runs: Trout is so big and so fast and runs with such ferocity that he leaves craters along the first-base line.

"That's something that I saw in him -- that's the intangible that you can't really teach," he said. "A lot of guys are fast, but they don't dig. They don't find the fight. He digs and finds the fight inside of him to get to first base, and that's a trait I really want a majority of major leaguers and minor leaguers to have, and it's hard to find."

"When he runs, he digs earth out of the ground and he pounds in there, and just to run down, him running down the line is very impressive."

Longtime umpire Mike Winters observed about Trout: "When he runs, it's like there's a rooster tail going up behind him. It's amazing how high the dirt flies up behind him."

Greg Morhardt, the Angels' area scout who tracked Trout for that organization, saw that same trait in a teenage Trout, remembering how Trout would tear up the high school fields he played on because of how hard he ran. Another scout turned and said to Morhardt, "It's like he's a ball of energy. He just rips the ground up."

In one high school showcase, players were paired up and timed, and Trout was matched against Anthony Gomez, another New Jersey product who would go on to play at Vanderbilt. A year later, Morhardt bumped into Gomez, who brought up that match race against Trout. Gomez said that when the hat was dropped to start the sprint, he saw that Trout slipped on his first step -- and Gomez realized he had a shot and took the lead.

There was that time when Trout raced Hunter for money, "I said, "Hey, I'll race you for $100,'" Hunter recalled. "Trout, the competitor that he is, says, 'I'll do it. Let's go, I'll race you.' He's very pumped up about it. I got all the clubhouse guys together, got everybody together. In the outfield in Tempe. He's pumped, and he's ready to go, I'm ready to go. They said: On your mark, get set, go!'

"He took off, and he was gone. I wasn't running that fast; I'm not going to beat him. We got past the finish line, and he says, 'Give me my money! Give it to me!'"

As a freshman at Millville High School, Trout made the varsity team and started at second base -- and really, really struggled at the outset.

"I think he had built it up in his mind so much because his father was the coach here and a legend in Millville. It's hard to think of it in these terms now, but at that moment, being a Millville baseball player was the world to him, and he was struggling."

In one game, Trout moved to his left and made a simple throw of 30 feet, and Millville's staffers whooped encouragement. For Hallenbeck, that was not the right thing to do. "I said [to the assistant coaches], 'Since when at this level do we applaud kids for throwing a ball 30 feet? Leave the kid alone,'" Hallenbeck recalled. "We're paralyzing this kid because we're in his ear every time, so I just asked everybody to step back, just let him get comfortable."

"I talked to one of the captains and said, 'Hey, just take him under your wing and calm him down.' And it took him no time at all. Mike settled in and everything was fine."

With the Angels holding the 24th and 25th picks in the 2009 draft -- and 23 picks ahead of them -- Morhardt was petrified that some other scouts would see Trout's spectacular athleticism on any given play and fixate on it. Morhardt had played with Mike Trout's father in the minor leagues in the '80s, roomed with him in spring training and had enormous respect for Mike and the Trout family ... and yet he found himself sort of rooting against Mike in his senior year at Millville High.

"This is the longest six months of your life as a scout," said Morhardt. "Jeff called me one time and said, "Mikey pitched yesterday. He didn't do well, Mo.'

"We're like halfway through the high school season and I go, "Trouter, don't take this wrong: I hope Mikey doesn't get a hit the rest of the year because I'm just hoping that when other scouts come in to see him, that he struggles and then we get him.'

"When you go to a game, I'm thinking, I'm hoping, I'm praying, 'Can he pop it up to the pitcher so they can't time him [running] to first? Hit him in the wrist or something, and not hurt him.'

"You're trying to figure out a way that Mike can't show his ability. If he hits a grounder that's short, all of the sudden, it's 3.9 seconds."

A sprint of 3.9 seconds would have made scouts swoon.

"And if he hits the ball in the barrel, forget about it," Morhardt said, referring to Trout's power. "So, you're just hoping that the high school kid facing him can't throw a strike. Something."

Mike Trout's December 2017 wedding was still a couple of weeks away when he informed his family that the conditions for a winter storm were increasing, a possibility he spoke of giddily. Of course, that's what happened, because as all of Trout's teammates know, everything seems to work out for him.

Snow fell at the wedding. A whole lot of it. Angels right fielder Kole Calhoun was among those who attended. "You had some snow on the ground and a bunch of baseball players sitting around," he said. "I mean, there's bound to be one or two snowballs was being thrown. It was probably my fault. I was probably the one who started it."

The snow was perfect to make snowballs, Mike Trout recalled. "We let one go, the first one, and it landed on the patio out back and they looked around; after that it was just straight chaos. People were ducking, diving, hiding behind heaters, hiding behind benches, and it just lasted for probably about a half-hour. I hit one of my buddies in the back, Eddie Adams. Got him pretty good. After that, he was trying to get me the rest of the night.

"Wives of other guys you know ran inside ducking, they're getting hit. So, it was pretty cool."

At least until the moment the bride was hit -- by the Angels' right fielder.

"I'm walking with Jessica and Kole's behind me," Trout recalled, "and he picks a snowball up, and he throws it. I see it and I duck, and it hits Jessica right in the face."

"For being out in the cold," Calhoun said, "I was about as hot as you can get. It was like, 'Oh my gosh, I can't believe that just happened.' I got a nice little look from Jess, and that was the last snowball that I threw for a while, that's for sure."