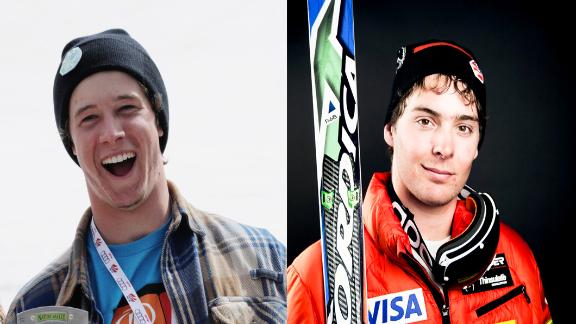 ZAGREB, Croatia -- David Chodounsky paid a fitting tribute to the two junior members of the U.S. ski team who were killed in an avalanche in Austria.

Competing in the opening leg of a World Cup slalom race in Croatia on Tuesday, the American skied one of the best runs of his life and ended up with the third-fastest time.

When he crossed the finish line, he pointed at his helmet, which carried a piece of tape saying "Remember BA + RB."

"The entire U.S. ski team is mourning for them," Chodounsky said. "We're just skiing for them today. They were great guys."

All U.S. ski team athletes at the race joined in the mourning of development team members Ronnie Berlack, 20, and Bryce Astle, 19, who died Monday near the Rettenbach glacier in the mountains over Soelden, the U.S. ski team's European training base since 2011.

"It's terrible," Chodounsky said. "U.S. skiing is a tight family, there is not many of us. They were great skiers, young, but they were coming up. There is no doubt in my mind that one day they had made the World Cup. The entire team is skiing for them."

The Americans wore black armbands during the race, while the American flag in the finish area was flying at half-staff. A 30-second moment of silence was held before the race started.

Berlack, from Franconia, New Hampshire, and Astle, from Sandy, Utah, were part of a group of six skiers who were descending from the 3,056-meter (about 10,000-foot) Gaislachkogel when they left the prepared slope and apparently set off the avalanche. The other four skied out of the slide and escaped unhurt.

"What happened yesterday was for sure a bummer," Olympic giant slalom champion Ted Ligety told The Associated Press. "We are all racers. But to know you've lost a couple of your teammates is super saddening, for sure."

Will Brandenburg was the fastest starter in the first run before skiing out. He had Berlack and Astle on his mind.

"Bryce always had a way of going for it, and that is something I love because I see it in my skiing, too," Brandenburg told the AP. "I was just going to go for it, that's all I wanted to do, I wanted to fight and that's what I did."

Brandenburg, 28, was like a mentor for the two juniors and helped them settle at their European training base.

"Those two kids were amazing people," he said. "I mean, great skiers, but truly amazing people. And I got a great opportunity to spend quite a bit of time with them and help them throughout the summer with travel and training."

The tragic news reaching the athletes the day before the race destroyed every preparation plan.

"I was broken last night. It was really difficult to sleep," Brandenburg said. "But I was able to put that behind me and ski the turns I wanted to ski and execute how I wanted to execute."

According to Ligety, the death of their teammates might have brought out the best of the team.

"You saw with Daver and Will, it's maybe a bit of inspiration to do something special for those guys," Ligety said. "We just heard the news in the afternoon after getting up the hill. We had a big meeting and I mean, it's just sad, what can you do? Horrible to have two young guys, so young, to lose their life in those circumstances. That's just tough."

The deaths left the U.S. ski team "in shock," U.S. Alpine director Patrick Riml said. Men's head coach Sasha Rearick left the World Cup group in Croatia to head back to Austria as soon as he heard the news on Monday.

"We've always been a tight family, but this is going to make us even tighter and stronger," Rearick told the AP in a telephone interview from Soelden. "Stronger mentally and stronger in many ways."

Rearick said the skiers and staff at their training base were "standing strong together."

"The emotions are coming and going in cycles," the coach said. "But the support we are getting from the whole family of ski racing has been very nice to have. We really appreciate that. The support from different federations, different skiers, they have been coming in from New Zealand to Canada to America to Switzerland, everywhere."

"Ronnie was a cheery individual who was so proud to be part of the team, and always did everything to help the team in any way he could," he said. "Bryce had a tremendous smile, a joy of life. I will never have a shorter 10-hour drive to California than the time I drove with him."

Several members of the U.S. women's team took to Facebook to express their feelings.

"I'm heartbroken at the news of my younger @usskiteam teammates passing away," Stacey Cook wrote. "Avalanches have stolen too many lives of friends way too early. A small comfort is knowing how much love and passion we all share for this sport, and how big I'm sure they were smiling right up to the end..."

Alice Mckennis acknowledged it was "hard to put it in words how devastated and saddened our little ski world is today."

"We lost two great young men today," she said. "Ronnie and Bryce touched many people in their lives and now remind us that every day is precious and that we must live every single one of them to the fullest and chase after our goals and dreams just like Ronnie and Bryce were."