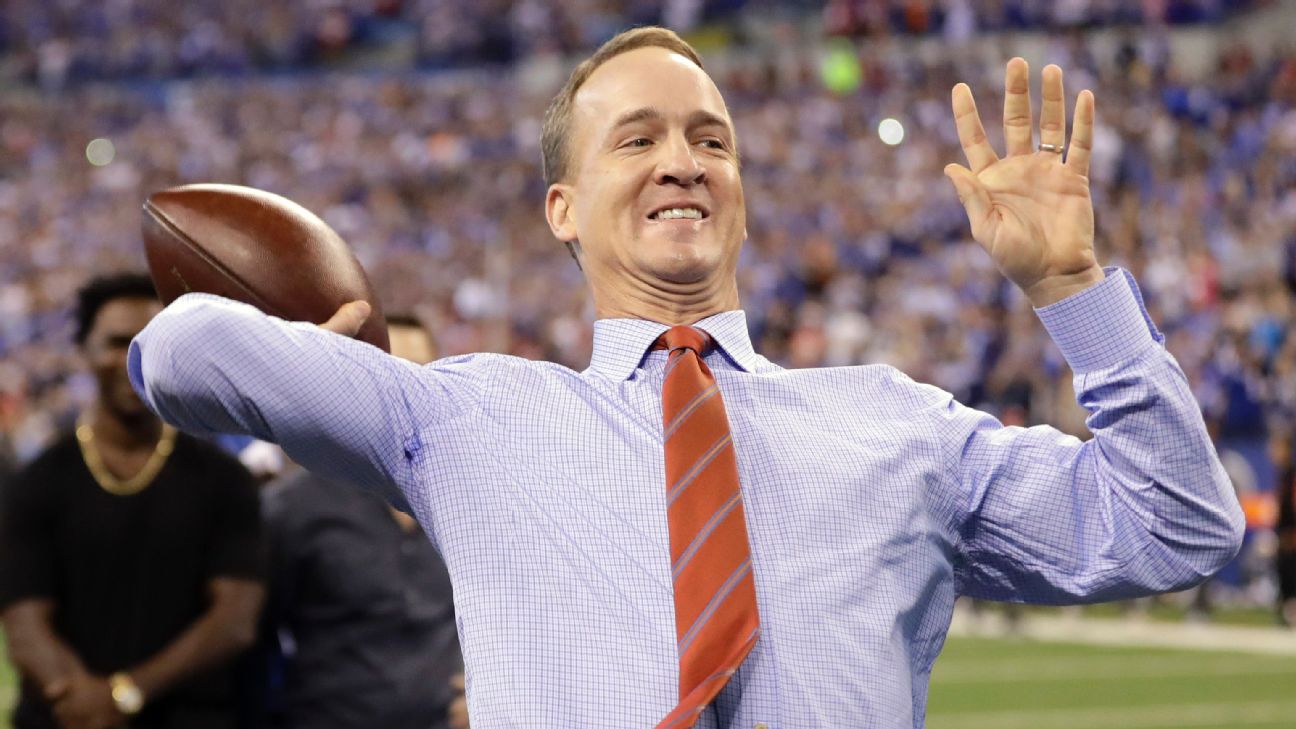 NAPA, Calif. -- Peyton Manning visited the Oakland Raiders training camp practice on Thursday and having once played for Jon Gruden in the 2001 Pro Bowl, Manning sees the same coach 17-plus years later that he did in Hawaii.

"Being a football junkie, Jon and I kind of speak the same language," Manning said after taking in practice. "So I know he's happy and it's good for football that he's back in the game."

Manning, who is on a speaking circuit, said he reached out to Gruden when he saw his tour was bringing him to San Francisco, to see if he could get his "football fix for the summer." Gruden invited him to camp in Napa, about 50 miles northeast of the city, and Manning sat in on the Raiders' quarterback meeting Thursday morning.

"Peyton's one of my favorite all-time (players) and he's one of the best to ever play the game so just to pick his mind ... I took full advantage of today," said Raiders quarterback Derek Carr, who is learning his third different offensive system in four years.

"Just after whatever drill, I'd go, 'Hey, how was the communication? How was the execution?' And he'd give his feedback, you know? To have that, from someone like Peyton, I think that's kind of invaluable."

The feeling was mutual.

"I really like Derek," said Manning, who said he also sat in with Tennessee Titans QB Marcus Mariota in Nashville last week. "I've just known him a little bit from playing against him, but Jon let me sit in the quarterback meeting this morning and you can tell he loves it and he is very engaged and, obviously, trying to learn a new system, which is a challenge. But one thing about Jon Gruden, he loves football and so everybody playing for him better love it, too.

"And when your quarterback loves it, and you can tell Carr does, it shows. I pull for quarterbacks; it's a unique fraternity and I think the NFL needs good quarterbacks, especially young quarterbacks, and they've got a really good one in Derek, for sure."

Did Manning offer any advice in the QB meeting?

"I'm not a coach, I just enjoy sitting in," he said. "I've never considered myself a coach, but I guess you're always kind of paying it forward. So if anybody has a question about the no-huddle offense or calling audibles, yeah, I'm glad to (help)."

Part of the reason Gruden came back to coach the Raiders was the chance to work with Carr. Manning said he always expected Gruden, who spent the past nine years in the booth for ESPN's "Monday Night Football," to return to the sidelines.

"I could always tell," said Manning, who remembered then-Indianapolis Colts executive Bill Polian trying to relegate Gruden to a corner of the field during practice before a Monday Night game because even Polian "knew he would coach again. 'I don't want to give him all our secrets and stuff.'"

"Broadcasting, I'd see him when he'd do games and I'd say, 'How you doing, Jon?' He'd say, 'Doing great. I haven't lost a game in six years.' And I'd say, 'But you haven't won one, either.' I could tell he always thought about that. When you're not playing, you certainly don't have the pain of losing a game, but you don't get the thrill and exhilaration of winning a game."

"Just that one week at the Pro Bowl ... it was a little more intense and serious, but that week guys wanted to kind of run through a wall just for him as our Pro Bowl Hawaiian coach," Manning said. "Partially because he bought all the beer for all the players, which is smart. I think it helped him in free agency a few years later.

"Ultimately, I think the role of any coach is to get his players to play hard for him. And there's different ways. Tony Dungy, you had so much respect for him, you didn't want to disappoint him so we played hard for him and it was a very effective way of leading. And I think Jon, just his passion for it, it shows. He wears it on his sleeve and players will respond to that."
Report a correction or typo
Related topics:
sportsespnpeyton manningquarterbacksnfloakland raidersjon grudentraining campderek carr
Copyright © 2022 ESPN Internet Ventures. All rights reserved.
TOP STORIES
Tulare Co. Sheriff identifies suspect in 1994 cold case
18-year-old woman's body pulled from Lake Success, deputies say
Fresno council members vote to pass budget for fiscal year
Fundraiser being held to support Planet Vegan after food truck fire
Man shot and killed in parking lot of Atwater high school
2 hospitalized with major injuries after crash in Madera County: CHP
Apology from double murderer not enough to avoid max punishment
Show More
Jackson sworn in as 1st Black woman to sit on Supreme Court
Suspected DUI driver crashes car into pool full of kids in Sanger
SCOTUS limits EPA's ability to reduce emissions, fight climate change
Dine and Dish: Sushi Kuu in Visalia
Fresno VA, NAS Lemoore create mental health partnership
More TOP STORIES News