Why the 49ers took a risk and traded for Jimmy Garoppolo 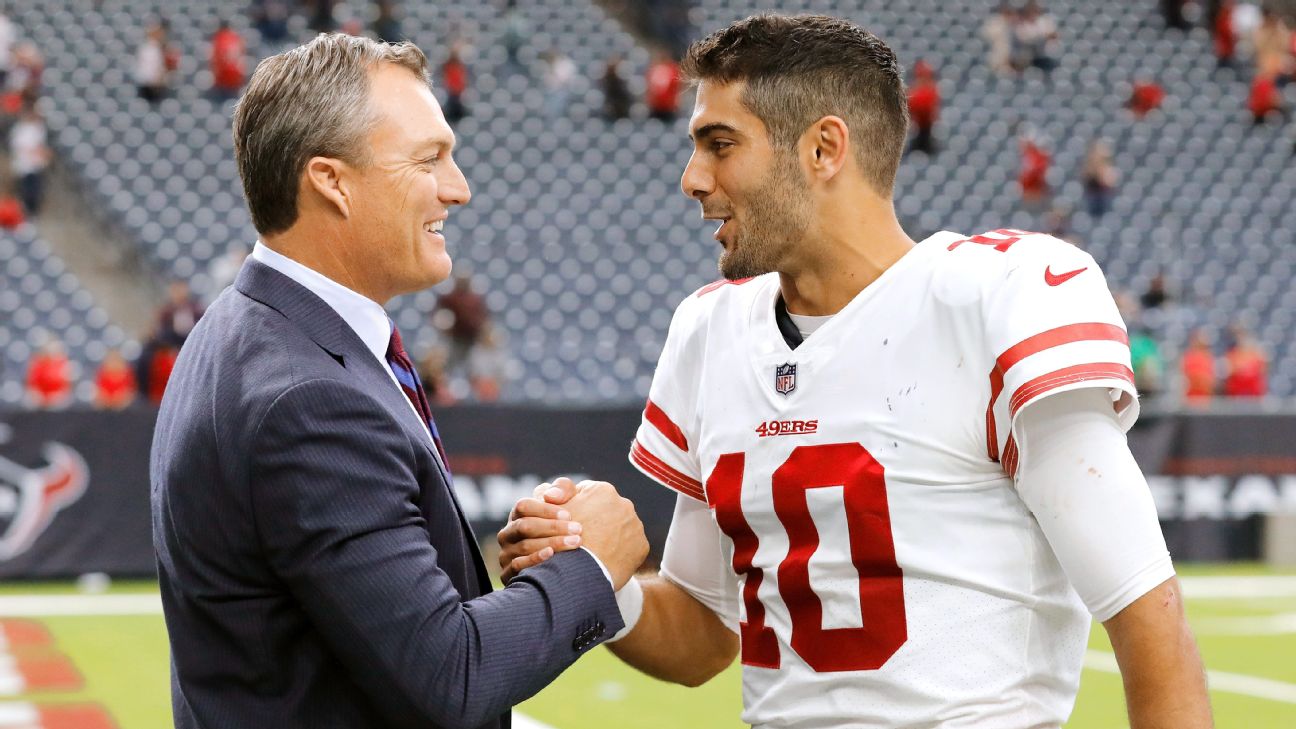 SANTA CLARA, Calif. -- Back in 2017, if somebody had told you Kirk Cousins would be playing in a Vikings-49ers NFL playoff game here in January 2020, you'd have assumed he was playing for the 49ers.

That was Kyle Shanahan's first season as San Francisco coach and Cousins' final season in Washington. Cousins' pending free agency led many people around the league to connect him with Shanahan, who had been his offensive coordinator at the start of his career.

But in late October of that season, the Niners traded a second-round draft pick to the Patriots for quarterback Jimmy Garoppolo, who was going to hit free agency in 2018, setting in motion a chain of events that results in Cousins as the visiting quarterback Saturday and Garoppolo under center for the home team.

"I remember thinking, 'Second-round pick, that's a lot of capital,'" 49ers general manager John Lynch said Thursday. "But we felt like it was worthwhile. And I remember Kyle and I talking and saying, 'Hey, let's just assure each other that this doesn't mean he's our guy going forward; this means we're going to take a look, and we've got the rest of this season.'"

Garoppolo had been on the 49ers' minds for a while. During that 2017 season, which was Shanahan's first as San Francisco's coach and Lynch's first as general manager, it was clear the quarterback of the 49ers' future was not on the roster. They opened the season with veteranBrian Hoyer as the starter, then used rookie third-round pickC.J. Beathardwhen Hoyer got hurt. The expectation was that they'd find their guy, either via trade, the draft or free agency, that offseason.

Shanahan had a clear idea of what he wanted in a quarterback, from a physical-traits standpoint, and the rest of the 49ers' front office and coaching staff knew that Garoppolo was one of the guys who fit the description. At the time, he had thrown just 94 NFL passes, but he had completed 67% of them and was averaging a respectable 7.3 yards per attempt.

"I remember Kyle had teach tapes and profile tapes on what we were looking for in quarterbacks, and some of it's the quick releases, and Jimmy was often on that tape even though he was the backup quarterback in New England," Lynch said. "So I found that interesting. And I'd been through New England as a broadcaster and you can't help but see it: 'Wow. Who's that?' and talking to people there and how high they were on him."

The key to the trade was what happened after Garoppolo got there. Shanahan didn't start Garoppolo in any of the first three games after the trade. Beathard started a home loss to Arizona and a victory over the Giants, then the Niners had a bye week, and Beathard started the first game after that, at home against Seattle.

But Beathard got hurt on that game's final drive, forcing Garoppolo into the game for the final three plays, the third of which was a touchdown pass. Garoppolo would start the final five games of that season and win all five, which was one of several factors that led Lynch and Shanahan to sign him to a long-term contract before he hit the free-agent market that offseason. The first year of that contract was a washout after Garoppolo tore his ACL in the third game. But his healthy return this season is a major part of the reason the 49ers are the top seed in the NFC playoff field.

"The best quarterbacks, the best players, make everyone around them better, and that's what we saw with Jimmy right away," Lynch said. "And we saw tremendous room for growth. He already was playing at a high level, but with time, we knew that there was tremendous room for growth in terms of understanding, and I think this season has illustrated that. You just have to have experiences, I think especially at that position, and that's what we were so coveting last year, and it was taken from him. But this year, he's worked through it, and he's been tremendous."

The next experience for Garoppolo will be his first playoff game, Saturday against the Vikings and the quarterback who, had that 2017 season and offseason gone a different way, could have taken his spot. Cousins and Garoppolo posted identical 69.1 completion percentages this season and near-identical numbers in Total QBR (Garoppolo 58.8, Cousins 58.7) and touchdown passes (Garoppolo 27, Cousins 26).

Cousins won his first playoff game last week, engineering a game-winning drive in overtime against the Saints in New Orleans. Garoppolo is the 10th quarterback since the current playoff format began in 1990 to make his playoff debut for a team seeded first in its conference. The previous nine went 4-5, and Kurt Warner was the only one among them who reached the Super Bowl.

"Nothing's been too big for him," Lynch said of Garoppolo. "I don't think he needs to change anything. He needs to be who he's been all year. And day one, since he's been him, he's impressed with his ability in big moments. It's just never too big for him." 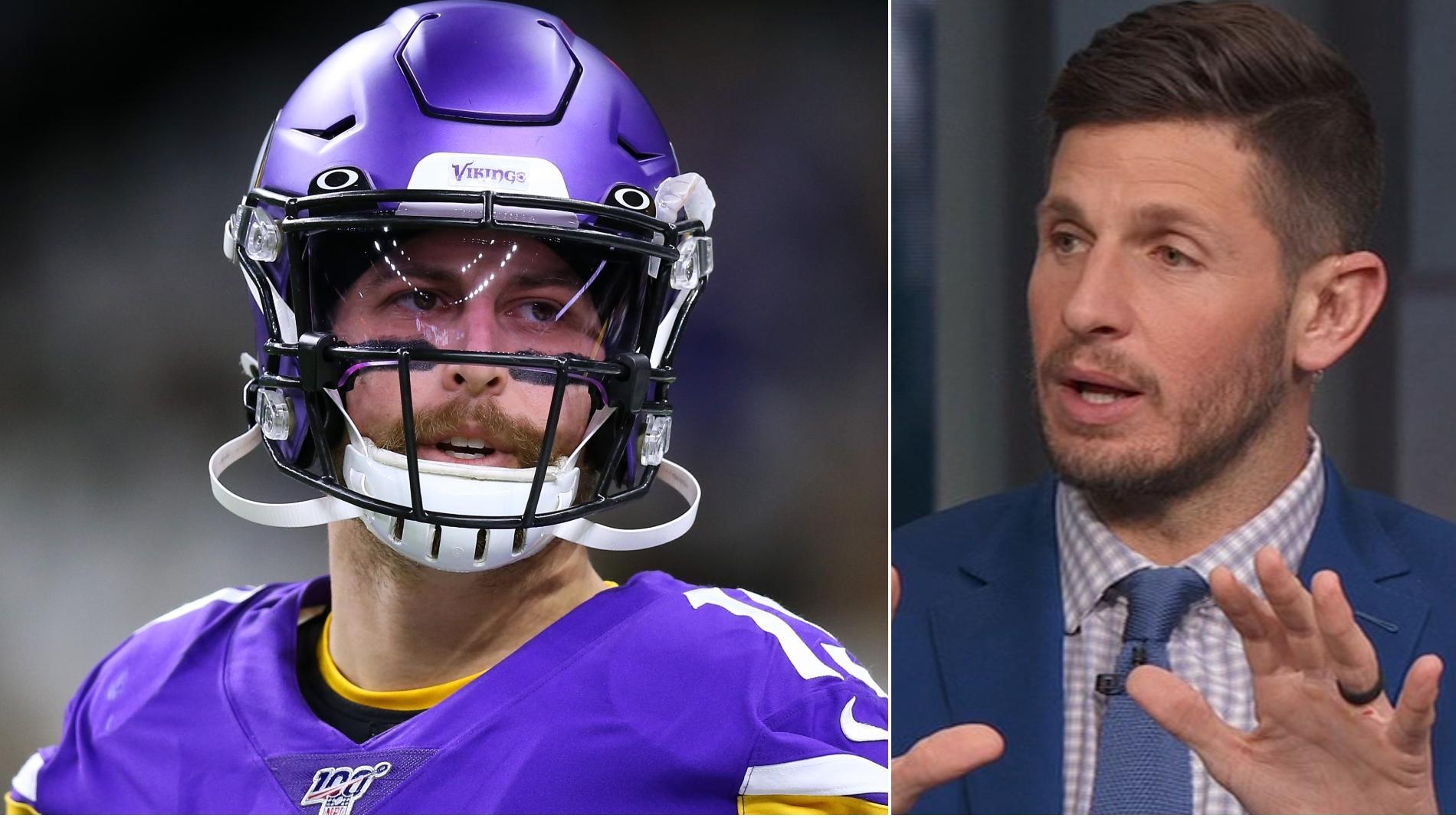