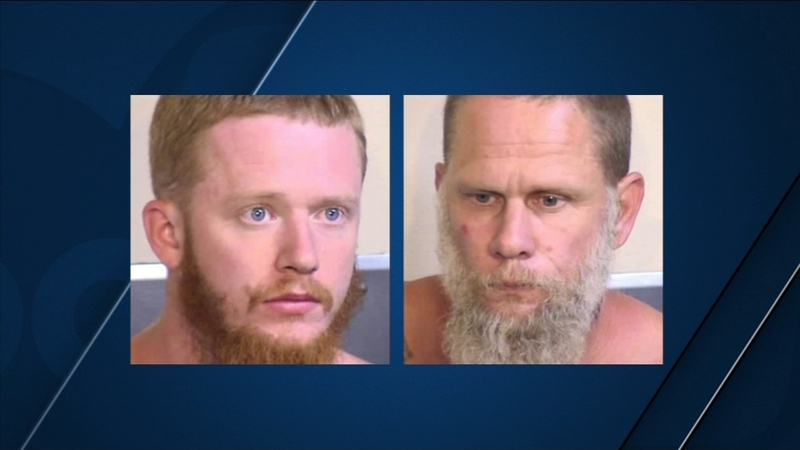 FRESNO, Calif. (KFSN) -- A man says he feels lucky to be alive after he and his cousin were stabbed several times at a Fresno County campground last night.

His 3-year-old Dobermann was also stabbed to death in the violent confrontation.

Two suspects, Kelly and Jimmy Cox, are in custody after Fresno County Sheriff's deputies caught up with them near Table Mountain Casino.

It started with a confrontation between dogs. One of those dogs was stabbed.

The victim says he did not know the suspects, but they were camping near his family.

At one point, he briefly left the campsite, and when he returned, he found his three-year-old Dobermann, Duke, stabbed to death.

.@FresnoSheriff arrested these two men after a violent confrontation at Lost Lake Park last night. They say Kelly Cox (left) stabbed a dog to death and then stabbed his owner. Another man was also stabbed. @ABC30 at 6. pic.twitter.com/cnvQR8gqcg

He says Kelly's pit bull was loose and had approached Duke twice.

The second time, he says, the two dogs started fighting, and then Kelly came over and repeatedly stabbed Duke in front of his 17-year-old son.

He says his dog was slaughtered.

"My son had told him to stop," the victim said. "And the guy told him you better not touch that dog or I'll slice you up just like that dog."

The victim ran to his son, but he says six or seven men jumped on top of him and began beating him.

He says many of them had knives and guns, but he knows it was Kelly who stabbed him.

"And when he walked away he told me I'm leaving you for dead," the victim's aid. "He goes, 'You're not going to make it to the hospital.'"

The victim's cousin rushed to help as well, but he was also stabbed multiple times. Sheriffs officials say it is unclear who stabbed him.

Both men were also hit in the head with glass bottles.

The victim lost a lot of blood and says the wounds came close to his spine and lung, but he was released from the hospital on Sunday morning.

His cousin is still in the hospital, having a harder time, but is expected to survive.

The victim says he does not think he will go camping with his family again.

"We were just going out there to have a good time with our family, that's it," the victim said. "I don't think nobody should have to go through this. And I don't think this was just a one-time incident. It might have been going on for a while."

The victim also says he is grateful for the help of another camper who brought over rags and towels to put pressure on their wounds.