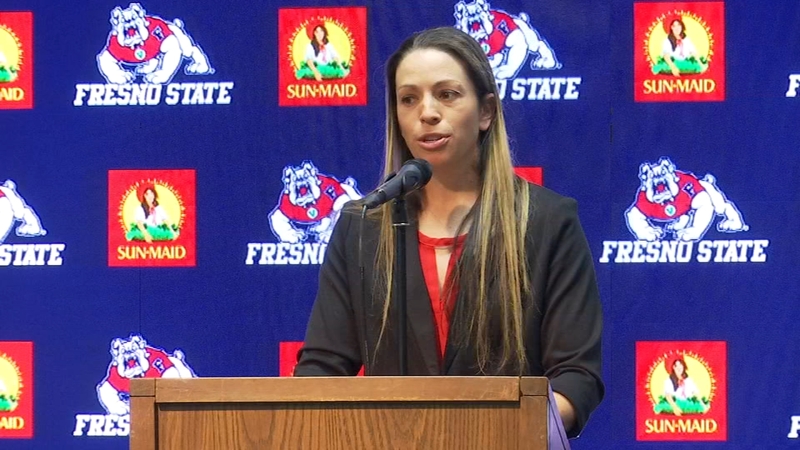 "I see the potential to obviously first win the Mountain West, second to make it to the (NCAA) regional, third to make it through that regional and once you start doing that, you can start making it to the World Series," she said. "I see that for this program, I would not be standing here if I didn't believe that."

Fresno State introduces Stacy May-Johnson, the fifth head coach in @FresnoStateSB history.
“The support from this community is very different.”
Handful of alumni in attendance along with current player Hailey Dolcini. @ABC30 pic.twitter.com/01wsuSytFh

Athletic Director Terry Tumey said he was in 'recruiting mode' to hire May-Johnson, a former coach at Utah Valley. "You won't find a place where you call for coach Johnson where they just don't glow about her."

The move comes less than a month after Linda Garza stepped down prior to allegations of an altercation with Kaitlyn Jennings.

"I don't see a fracture," Tumey said on the state of the department. "What I see is a great program getting better and what I see is surrounding these young students with people who will invest in them."

A handful of alumni were joined by head coaches Mike Batesole and Kalen DeBoer for the introduction. Fifth-year pitcher Hailey Dolcini was the only player in attendance but says many were home for the summer.

"We're excited to move forward with coach Johnson and excited to see what she brings to the table," Dolcini said.

Step 1 for May-Johnson is solidifying a staff. Hitting coach Justin Lewis announced he would not be returning. Though not finalized, Whitney Arion is expected to be his replacement. She coached with May-Johnson at Utah Valley and Eastern Kentucky. It's unclear if Jodie Cox, who served as interim coach during Garza's leave of absence, will be retained as pitching coach.

May-Johnson also noted the need to fill some holes in the team's roster through the transfer portal.

"There were some young women that we were talking in the transfer portal to before and then all of a sudden, we put a red hat on and they seemed very, very interested," she said.

As for being the fifth head coach in program history and third in the last six years, she said there are no plans to use FS as a stepping stone.

"There's a reason Margie Wright was here for so long, this is an incredibly appealing program. I will tell you this: I think this is a better job than some of the jobs in the PAC-12 and when you can say that about a program, it clearly has that potential. So I'm excited to pursue this and see if we can't get it to the highest place possible."
Report a correction or typo
Related topics:
sportsfresnofresno state bulldogs
Copyright © 2021 KFSN-TV. All Rights Reserved.
FRESNO STATE BULLDOGS
No. 13 UCLA trying to avoid another upset by Fresno State
College football Week 3: Auburn's first Big Ten road game since 193...
Local bank teaming up with Fresno State athletes
QB&A: 'Jake Haener is one of the best players in the country'
TOP STORIES
Employee's criminal conviction prompts explosive day at City Hall
Remains of WWII Marine from Hanford returning nearly 80 years later
Valley school dedicates gathering area in memory of teacher killed
KNP Complex Fire: Crews working to protect giant sequoias
1 person shot in northeast Fresno, police searching for suspects
Auction house full of items in Madera County burns down
Man arrested for allegedly shooting mother's boyfriend in Fresno
Show More
Video shows Gabby Petito's police encounter before disappearance
Evacuation orders issued for some near Windy Fire
Yosemite Unified parents voice concern over district's COVID protocols
Armed, innocent homeowner shot during Reedley PD pursuit of suspect
Internship for FUSD students helping give information on COVID vaccine
More TOP STORIES News