'Stark contrast' in COVID-19 infection rates based on education, race in NYC 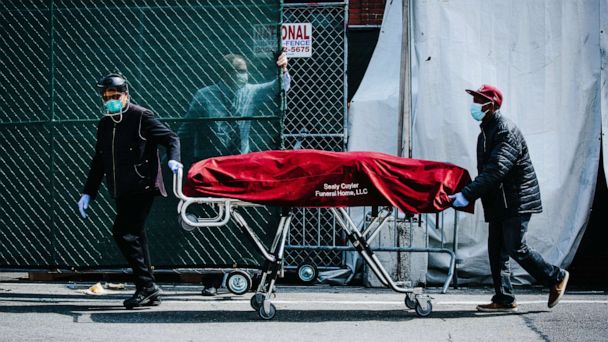 As COVID-19 cases and deaths continue to mount in New York City, the epicenter of the United States' outbreak, researchers are uncovering clues about which neighborhoods have been hardest hit by the disease -- and which characteristics of those neighborhoods put residents at risk.

Work is a tradeoff between safety and security for essential employees

Staying at home is one of the strongest ways that public health officials have been attempting to get a handle on COVID-19, which has no cure or vaccine and appears to have a higher fatality and infection rate than the seasonal flu. Sheltering in place is easier for some than others, experts say.

"Workers with college degrees are far more able to work remotely and therefore more safely shelter in place," said Ingrid Gould Ellen, a faculty director at the Furman Center, who worked on the new analysis.

In addition to being less likely to work from home, residents without degrees are more likely to rely on public transportation during the pandemic, creating an added exposure risk for them.

Some of those without college degrees are people in essential industries, like transit employees and grocery store workers, who "may have to make a far more difficult choice about whether to make a trade off between their personal safety and their livelihood," Ellen said.

There's been pressure from the White House and other government officials to keep coming to work, despite the risks. "You are vital," Vice President Mike Pence told essential workers at a press briefing Tuesday.

"You are giving a great service to the people of the United States of America and we need you to continue, as a part of what we call critical infrastructure, to show up and do your job."

The optics are striking. Essential workers risk their health and safety to come to work, supporting the many white-collar workers who order delivery and earn paychecks from the safety of their homes.

"The issue of essential workers is really tricky, but boy, if we're going to ask people to go to work, we need to figure out ways to protect them," Ellen said.

A disparate death toll in the Bronx

Another disturbing factor that's come to light as the outbreak has unfolded in the U.S. are racial disparities in COVID-19 infection and death rates.

"COVID-19 appears to have had a disparate impact on communities of color," the researchers write in their analysis.

Fewer than 1 in 5 black workers and 1 in 6 Hispanic workers are able to work remotely, according to the Economic Policy Institute.

The Bronx has been harder hit by coronavirus deaths than any other borough -- 20% of the deaths and 17% of the population.

"The Bronx not only has a greater prevalence of pre-existing conditions, it also has greater representation in the essential workforce," he said. "It is often people from the Bronx who are risking their lives on the frontline, so that the rest of us can have the luxury of working from home," he added.

"Racially concentrated poverty predisposes you to COVID-19 at its worst - at its deadliest," Torres added.

"What poverty rate really does predict, sadly and alarmingly, is mortality," she said.

Still, Ellen cautioned that the weak link between poverty and infection rates could also have to do with differences in testing rates across the city.

"People living in higher poverty neighborhoods may be less likely to be tested, which would make the infection rates appear lower in those areas," she said. "Undocumented people in particular may be hesitant to seek testing."

What to know about Coronavirus:

Those racial disparities aren't lost on Torres' South Bronx constituents, who are at a disproportionately at risk of dying from the disease. They're going to work on the subways, in hospitals and in NYCHA buildings without enough personal protective equipment to keep them safe, he explained.

"There's an atmosphere of fear," said Torres, who contracted COVID-19 himself and has since recovered.