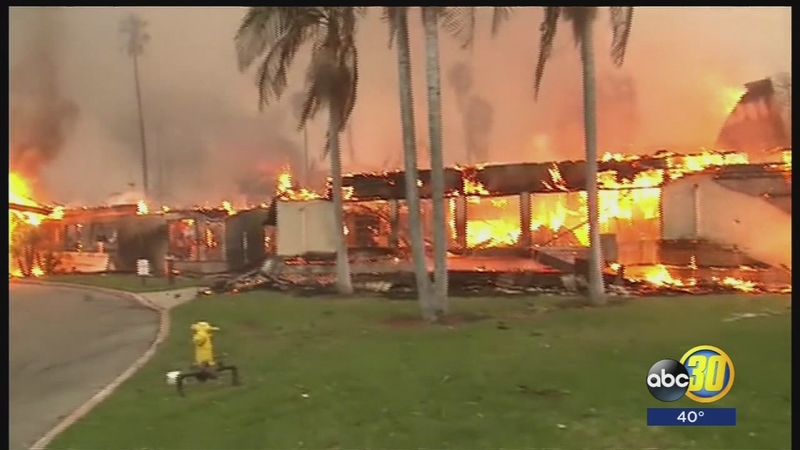 Multiple homes in the area of Scenic Way Drive in Ventura could be seen burning from the air. In downtown Ventura, the Hawaiian Village apartment complex was engulfed in flames.

Other homes on High Point Drive above Foothill Road in Ventura were burning as embers blown by whipping winds filled the air.

Meanwhile, a small brush fire burned nearby in an area south of Wildwood Park. The fire was sized up at two acres but had the potential to grow to 10-20 acres, according to Ventura County fire officials. Homes were possibly threatened.

Vista del Mar Hospital, a behavioral health care facility in Ventura, was razed to the ground by the blaze, ABC7 reporter Sid Garcia confirmed from the scene. All patients and staff were evacuated Monday night.


More than 7,000 homes in Ventura County were under mandatory evacuation as the blaze closed in on downtown Ventura, where multiple structures were reportedly burning. Fire officials said 27,000 people were evacuated from their residences.

California Gov. Jerry Brown declared a state of emergency in Ventura County due to the fire.

"This fire is spreading rapidly, but we'll continue to attack it with all we've got," Brown tweeted. "It's critical residents stay ready and and evacuate immediately if told to do so."

The fire continued to burn west "out of control," according to fire officials, due to strong east winds that grounded aerial flight crews overnight. One firefighter was injured while battling the blaze.

Ventura County fire officials said structures throughout the fire area continued to be threatened. Structure protection operations were in place, but fire officials said crews were having trouble accessing some areas due to the intensity of the flames.

Most up to date fire perimeter map of the #ThomasFire posted during the a.m. operational briefing happening now! @VCFD #VCFD pic.twitter.com/0lxxgvctX4

According to Ventura County fire officials, mandatory evacuations were ordered for the following areas:

Residents east of Dickenson Road, north of Monte Vista Drive along Highway 150 and South of Thomas Aquinas College to the area of Bridge Road.

Residents north of Highway 150 from Koenigstein Road west to the Dennison Grade, north to Reeves Road, east to McAndrew Road and north to Grand Avenue.

Initial reports indicated the Thomas Fire started at about 50 acres and moved at a fast rate of speed as winds as strong as 20 mph whipped through the area.

But those winds quickly fueled the fire, causing it to reach at least 10,000 acres by the evening hours Monday with no containment.

Authorities said at least one person was killed in a car crash connected to the fire. A source told Eyewitness News the person appeared to be fleeing from the blaze.

It was reported in the Steckel Park area near State Route 150 and Thomas Aquinas College around 6:30 p.m.. The winds were moving the fire toward the main part of the city, fire officials said.

The blaze eventually jumped SR-150, causing the highway's closure as it continued to eat through dry brush on both sides.

Footage from AIR7 HD, along with SkyMap7 technology, showed a mobile home park in Wheeler Canyon completely destroyed by the blaze.

Evacuations were issued for the college, a campground north of Santa Paula and residents in northern Santa Paula.

After midnight Tuesday, authorities issued more evacuation orders for the western part of Ventura, stating neighborhoods north of Main Street to Shell Road must be cleared.

Residents, such as Gilbert Acevedo of Santa Paula, said they are afraid they may lose everything they have.

"It's pretty bad. Hasn't been like this. Maybe 15 years is the last time it happened, and that time it burned maybe to the back of the yards - everywhere," he said.

An evacuation shelter was set up at the Ventura County Fairgrounds and Nordhoff High School in Ojai.

All schools in Santa Paula were canceled Tuesday, as well as classes at the college.

The fire also caused power outages in Oxnard, Ventura, Camarillo and other parts of Ventura County as well as areas in Santa Barbara County. About 20,000 residents were without power in Ventura County Tuesday morning, down from 180,000 Monday night.

Officials with SoCal Edison advised that residents should be prepared to be without power for days as crews worked to restore fire-ravaged lines.