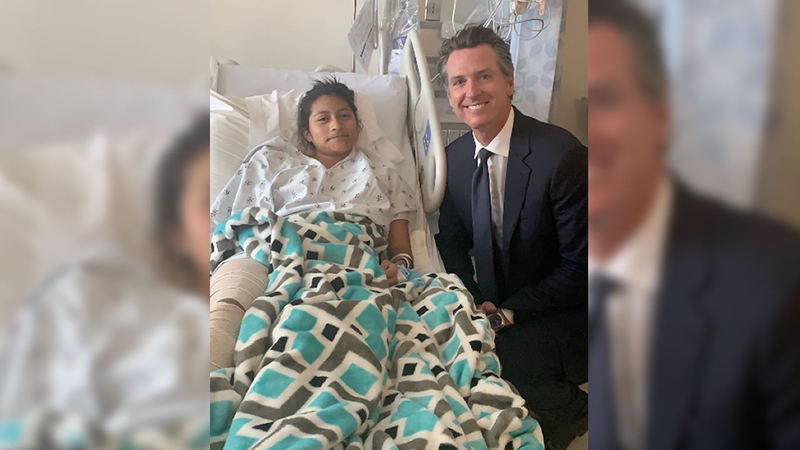 SANTA CLARA, Calif. -- One of the five victims at Santa Clara Valley Medical Center has been upgraded from critical to stable condition. Doctors say all patients are doing very well and have improved since they arrived.

ABC7 News was able to speak with the family of a 12-year-old girl who was shot. They said she is doing a lot better. She was one of four victims Governor Newsom visited at the hospital Monday.

With no advanced notice, Governor Gavin Newsom stopped to talk with reporters, after talking with four of the victims at Santa Clara Valley Medical Center.

Instead of bringing them comfort he says, "They gave comfort to me."

Newsom said the victims shared what happened when shots rang out at the festival.

A 12-year-old girl told him she was jumping in a bounce house when she was shot, but the governor said she was smiling when he came in the room.

"I said 'how are you smiling you just were shot?'" Newsom says. "She starts describing the courage as she was running away after she was shot. And kept running. And she is here, you know comforting the governor."

He spoke with a grandmother who lost her six year old grandson, a woman shot along with her husband. A loss for words, speaking with people he called courageous.

"I'm inarticulate," Newsom says. "Nothing I can say can change what's happened. I don't know what I can possibly say to make you feel better except God bless you and I'm so sorry."

At the hospital, doctors say the challenge of treating victims with injuries from high powered bullets is there may be more injuries than what they initially see.

"You have to have your radar very high to look for every bit of entry," says Dr. Adella Garland, Trauma Medical Director, Santa Clara Valley Medical Center. "Whether that be from direct contact with the bullet or whether that is just the shockwave."

The doctors said part of the reason they were able to treat victims so effectively was because relationships with other hospitals, especially St. Louis.

"Relationships save minutes and minutes save lives," Dr. Garland said.