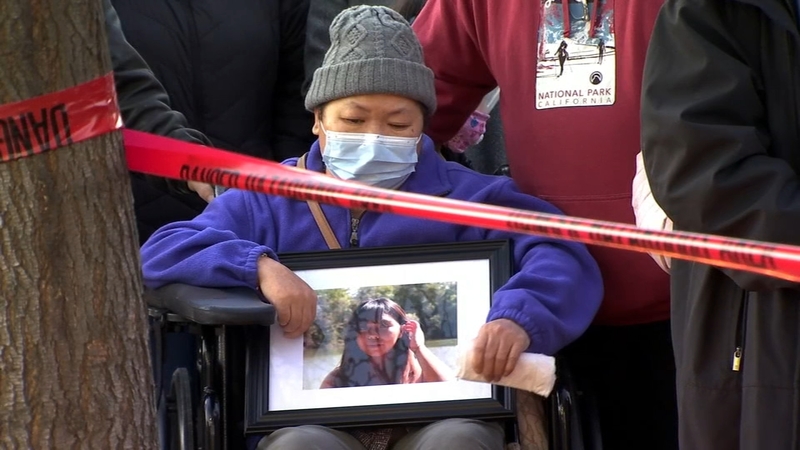 FRESNO, Calif. (KFSN) -- The intersection of Bullard and Palm in northwest Fresno is now a painful reminder for several families who are grieving the young lives taken too soon in a deadly crash last weekend.

On Wednesday night, dozens of candles burned near the grieving families who turned to each other for comfort during a vigil at the crash site.

Parents and siblings clutched onto photos of the victims - 27-year-old Christopher Vang, 21-year-old Linda Chang, and 17-year-old Allison Chang as they shared memories of the lives lost.

"Allison Chang was a gravitational force that brought everyone to her light and I'm so very proud to be her mother," said Dana Xiong.

Linda Chang's sister Victoria said: "Linda was an amazing person, she was a Hmong dancer."

These were three of the four victims killed in a car crash Saturday along Palm and Bullard avenues.

The fourth victim is 18-year-old Irvin Villarreal, the driver investigators say caused the crash after police tried to pull him over for racing, at one point going at least 100 miles per hour.

"You can kill yourself and cause destruction, but the worst thing is you might kill innocent people. You see all those parents grieving," said Fresno City Councilmember Mike Karbassi, who represents District 2 where the crash happened.

Karbassi, along with the Fresno Center, helped set up an online fundraiser to help the families of Christopher, Linda, and Allison, which has raised over $25,000.

Fresno Center members say someone in the community donated three plots for the burial.

Christopher's brother says his other sibling is still recovering at the hospital.

For the families, an already difficult year is ending in indescribable heartbreak as they say their final goodbyes to the daughter, son, and a Sanger high school student taken too soon.
Report a correction or typo
Related topics:
fresno northwestfatal crashdisastervigilfresnospeeding
Copyright © 2021 KFSN-TV. All Rights Reserved.
FATAL CRASH