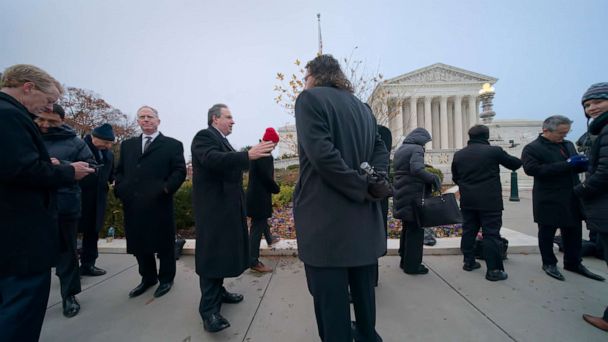 The first gun rights case before the U.S. Supreme Court in nearly a decade boiled down to a debate over whether there's still a case at all.

The New York City law in question -- which had banned the transportation of licensed, locked and unloaded handguns outside city limits -- was voluntarily rescinded last year and New York state later passed a new law mandating that no such restrictions ever be re-imposed.

The justices on Monday appeared narrowly divided on whether there is still a reason to get involved at the request of gun rights groups or dismiss the appeal altogether.

"Petitioners have gotten all the relief they sought," she said, in her first public appearance on the bench since a health scare and hospitalization last month.

"You're asking us to opine on a law that's not on the books anymore," Sotomayor told Clement.

"I don't think it's bad when people who have an argument settle their argument," interjected Justice Stephen Breyer.

The National Rifle Association and other pro-gun organizations, backed by the Trump administration, insist the argument is still very much alive. They want court to expand Second Amendment protections to explicitly include transport of lawfully possessed arms to a second home or gun range.

"We'd like something more than (the city's) representations to protect us in the future," Clement told the court, asking for an authoritative ruling.

"They didn't get all that they wanted," Justice Samuel Alito said of the plaintiffs. "They wanted a decision that this law is unconstitutional period."

Justices Neil Gorsuch criticized New York for what he said was an attempt to evade the Supreme Court review by repealing the contested law after the justices agreed to hear the appeal.

There were "Herculean, late-breaking efforts to moot the case," Gorsuch said.

Chief Justice John Roberts may be the decisive vote in the case. During questioning, Roberts signaled that he might consider dismissing the case so long as anyone who may have been found in violation of the now-defunct New York law wouldn't be penalized.

"Is there any way a finding of mootness would prejudice future options in this case, including damages?" Roberts asked Richard Dearing, the attorney for New York City.

Gorsuch asked Dearing to guarantee that there would be "no collateral consequences to individuals who had violated the city's prior ban" if the case is dismissed.

"Absolutely none," Dearing said. "On the record; on behalf of the city of New York."