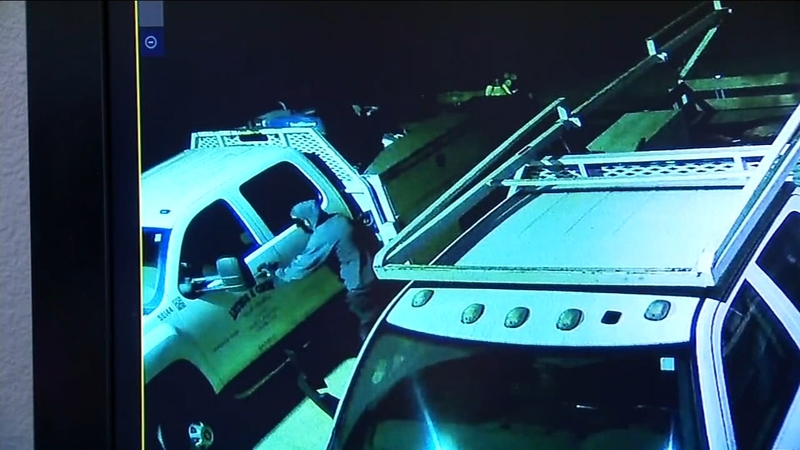 FRESNO COUNTY, Calif. (KFSN) -- Arthur and Orum Well Drilling has a couple of dogs and more than a dozen surveillance cameras on their property.

The man who broke in just before three Sunday morning didn't wake the dogs, but he did walk right in the path of a few cameras, including one in the main shop.

"When we finally got a good shot of his face, he had a mask on," Steve Arthur said.

The man takes a set of screwdrivers from the shop, pockets one, and sets the rest down outside.

Then he heads right for one of the service trucks, finds the keys in the sun visor, and takes off through the front gate.

You can see him leaving through the trees across the street.

About an hour later, employees notice the gate is open, the lock has been cut, and a truck is missing.

All the vehicles have GPS, so Arthur was able to track it to a location a few miles away-it had been stripped of all its equipment, worth about $20,000.

"Welders, torches, every hand tool that was on it, pipe wrenches, everything you could put on a service truck," Arthur said. "They even took the fuel out of the rear tank and looks like they pulled up another truck next to it and put the diesel into that truck."

About 40 minutes before the suspect is seen on video, cameras show a flatbed truck coming out the same area across the street--Arthur thinks this could have been the accomplice.

And he has his suspicions that the primary suspect may be an ex-employee.

"He knew exactly where everything was," Arthur said. "He knew where the cameras were kind of at."

Wednesday afternoon, the truck was towed to the dealership to get checked out and fitted with new keys.

And though Arthur says insurance will cover most of the cost of the stolen equipment, they still need to replace it.

Arthur says the California Highway Patrol has filed a report.