Suspect in stabbing spree in California was 'violent criminal': Police 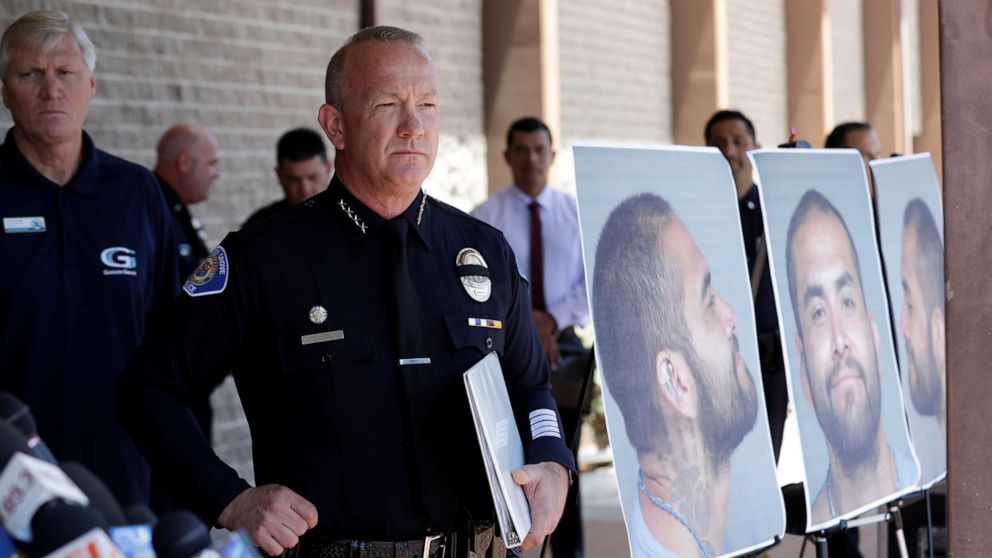 The 33-year-old man who is suspected of killing four people in a stabbing spree that terrorized two cities in Southern California was described by officials as a documented gang member and "violent criminal."

Zachary Castaneda, 33, was identified as the suspect in the string of attacks across the cities of Garden Grove and Santa Ana, officials said in a press conference Thursday.

"He is a violent criminal who should have never been considered for release," Garden Grove Mayor Steven R. Jones said.

Castaneda had previously been incarcerated for possession of methamphetamine with the intention to distribute while armed with an assault weapon, according to Garden Grove Police Chief Tom DaRe. Officials did not know the exact date of Castaneda's release, but said they knew he had "a violent past" and gang associations.

Jones lambasted a California state Assembly bill passed into law by voters in 2011 that apparently hastened the suspect's release from incarceration.

The Public Safety Realignment initiative was a response to a U.S. Supreme Court order to move inmates out of California's 33 state prisons because of a shortage of medical and mental-health care. The initiative sought to shift part of that population -- including those convicted on felonies not deemed serious -- into county jails.

"Our community becomes vulnerable when these criminals are released back into society," Jones said.

The deadly spree began at 4:09 p.m. local time on Wednesday and ended at 6:25 p.m. after officers spotted his car in front of a 7-Eleven in Santa Ana. Castaneda came out of the convenience store armed with a handgun and knife, officials said.

He told investigators the blood he was covered in was tomato juice, according to Garden Grove Police Lt. Carl Whitney.

The victims in the attacks, the two who were injured and the four who died, ranged in age from 25 to 64.

Police said Castaneda "remained violent with [police] through the night" but did not say why he allegedly committed the crimes. Witnesses told investigators the suspect did not say anything to the victims, but rather "he just savagely attacked these people," Whitney said.

At 4:09 p.m., officials received a call about a residential burglary at the apartment complex where Castaneda lived.

One of those victims was pronounced dead at the scene, while another died at the hospital, according to authorities. The two victims are believed to have been the people who called about the residential burglary. They confronted Castaneda and an "altercation occurred," Whitney said.

At 5:40 p.m., the suspect allegedly robbed a check-cashing business, also in Garden Grove.

And then, 25 minutes later, a woman was stabbed multiple times at a Garden Grove insurance business. She is expected to survive, police said on Thursday.

Four minutes after robbing the insurance business, the same suspect got into an argument with a man pumping gas at a neighboring Chevron station. The man was stabbed multiple times with knives and a machete and his nose was nearly severed, police said. He is, however, expected to live.

By 6:25 p.m., he allegedly robbed a 7-Eleven in Santa Ana and stabbed an armed security guard then used his knife to cut the guard's gun out his holster. The guard, who was a customer at 7-Eleven and not an employee, has also died, police said.

After investigating the robbery and fatal stabbing at the 7-Eleven, police discovered the suspect had also previously robbed a Subway and stabbed a person to death outside the store.

An undercover Garden Grove police officer found the suspect's car at the 7-Eleven -- and when suspect exited store armed with a handgun and knife -- he complied with an officer's order to drop his weapons and was taken into custody.

"Without a doubt other people would have been at risk if it weren't for their actions," Whitney said.

A spokesman for the Orange County District Attorney's Office said Castaneda "certainly made himself a candidate" for the death penalty. The DA's office is expected to file charges Friday morning.