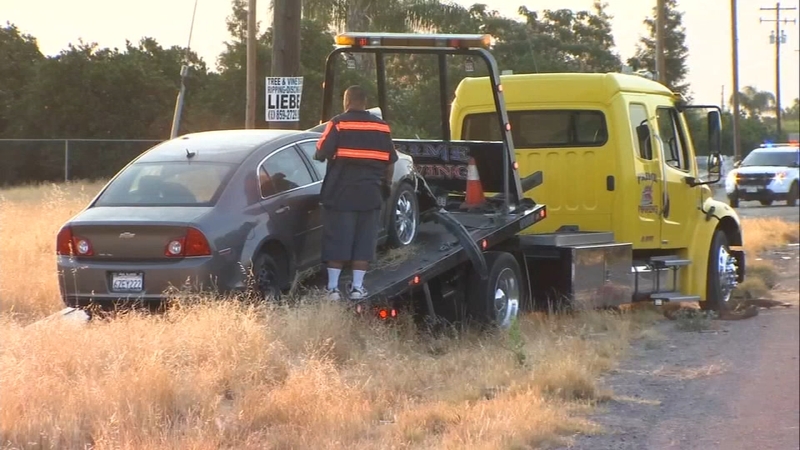 VISALIA, Calif. (KFSN) -- The California Highway Patrol says the man who left the scene of a deadly crash in Tulare County is in custody, after turning himself in.

The crash happened early yesterday morning on Avenue 408 and Road 104, near Dinuba.

The CHP is not releasing the suspect's name yet, saying they're still investigating the case.

The victim in the crash has been identified as Fayth Cerda.

On her GoFundMe page, family members say she was a vibrant and happy 21-year-old.

She was a passenger in a Toyota Matrix that was hit from behind.

The force pushed the vehicle into a telephone pole.

The driver of the matrix, also a 21-year-old woman, received significant injuries and was flown to a Fresno hospital.

The other car, a Chevy Malibu ended up in a field.

The CHP says an independent witness saw him get out and leave the scene in another car.

"The information we have is that he left a party and somebody was following him and then essentially witnessed the collision from a distance and drove up," said Sgt. Ryan Pedersen. "The other party stated that they didn't realize that the other vehicle was there. It was dark, so I guess it's plausible."

Sgt. Pedersen says that driver offered to bring the suspect to a hospital, but the suspect declined, so they brought him home instead.

Using the car's license plate number, the CHP tracked down the owner of the Malibu, who said the last person to use the vehicle was their son.

Wednesday evening, that man turned himself in.

Pedersen says his parents probably had some influence with that decision.

They believe he had been speeding and under the influence of alcohol at the time of the crash.

"It is a tragedy on all levels," Pedersen said. "I'm certain that now his parents and the young man himself are going to be suffering as well, but clearly not as bad as the family that lost a loved one."

The CHP says the person who picked up the suspect after the crash will not face charges at this time.
Report a correction or typo
Related topics:
tulare countydinubatraffic fatalitiestulare countydui crash
Copyright © 2021 KFSN-TV. All Rights Reserved.
TULARE COUNTY