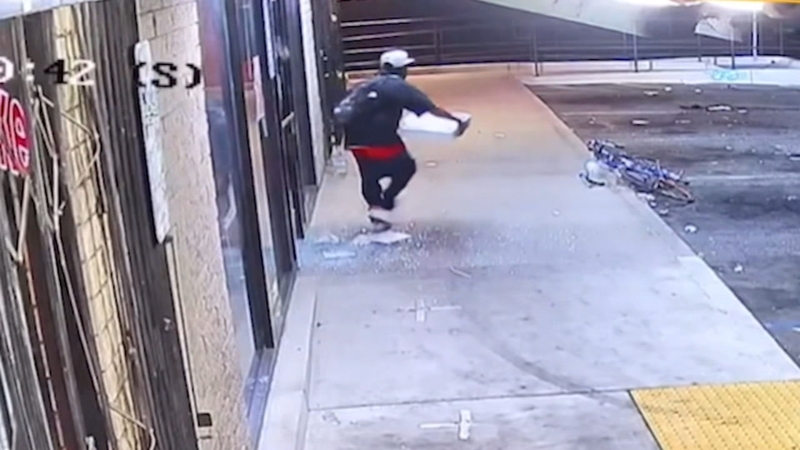 FRESNO, Calif. (KFSN) -- A popular Fresno taqueria is cleaning up after its second break-in in four months.

Surveillance video captured the moment a man smashed the front door of El Premio Mayor at Maroa and Shields in central Fresno.

He actually rode around on his bicycle for a few minutes before he returned to go inside and timed it just as the shattered glass started to fall. This happened at 3:30 in the morning on Thursday.

"It's so sad. It's heart-breaking and we feel violated in way going in there and seeing the glass broken," says owner Bianca Loza.

The taqueria re-opened with boarded up doors until the glass could be replaced.

They could only accept cash because not only was the register damaged during the break-in, the burglar got away with the cash box.

Loza says it only contained $50 but it will cost much more to fix the doors and register.

A second person though noticed the damage and wandered into the shop. He trashed the place and left with sodas and various items.

Loza says the loss of revenue isn't the only impact the pandemic is having on area businesses.

"With less people hanging around, dining in or going out and about, there's less eyes on the road, less eyes on the street, not as much patrol. It definitely affects everyone. It affects all the small businesses there," she says.

El Premio Mayor's popularity has surged in recent years after a few wins in the Taco Truck Throwdown.

This taqueria was broken into April and now it's happened again.